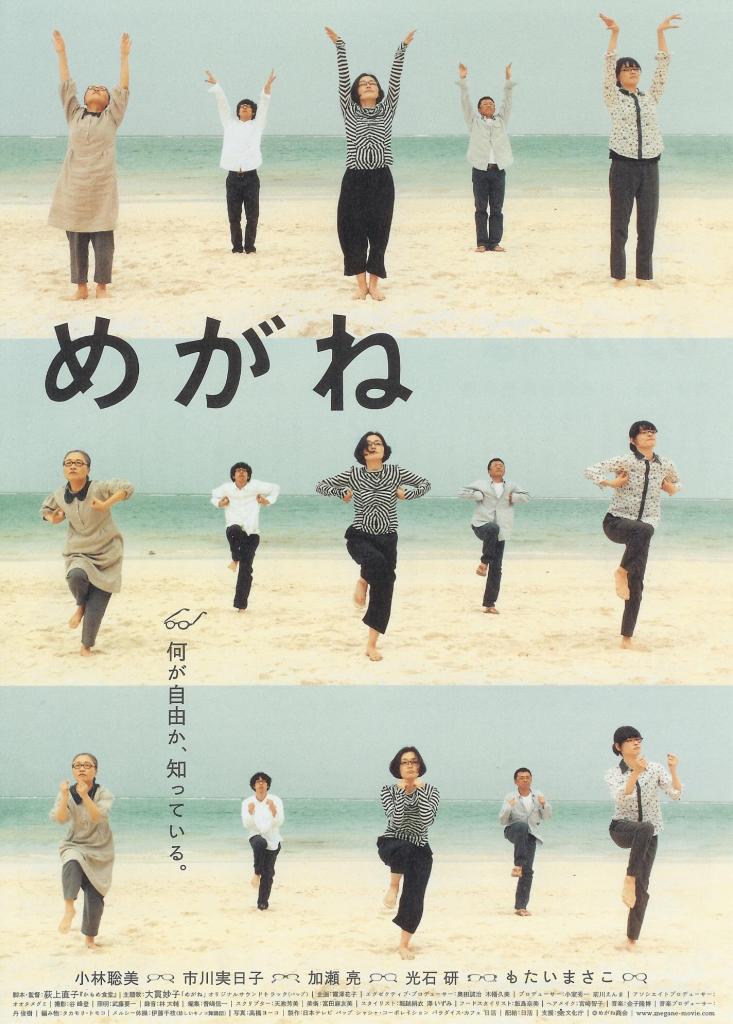 When considering their next holiday destination, many people like to peruse some brochures, have a read of trip advisor or head to a well known tourist spot that is likely to impress the guests at their next soirée but then there are always others who just simply show up somewhere and hope for the best. The central character of Megane, Taeko (Satomi Kobayashi), perhaps wishes she’d done a little research before heading out to a very strange inn on a very strange island but the longer she stays, the more the ways of the laid-back islanders seem to make sense to her.

The film begins as inn owner Yuji (Ken Mitsuishi) plays with his dog on the beach before suddenly realising “She’s here!” – referring to a favourite, annual guest who operates a shaved ice stand on that very same beach but for the spring only. Sakura (Masako Motai) has, indeed, arrived but unexpectedly there is also a second visitor, Taeko, all the way from the big city. Yuki seems impressed Taeko managed to find the out of the way hotel and points out their tiny sign (if they had a bigger one there would be too many customers).

Taeko might have been looking for an escape but this is a little more than she bargained for. First off, she gets a wake up call every morning in the form of Sakura kneeling next to her bed and commenting on the weather and she’s sort of expected to attend meals at the same time as everyone else, convenient or not. Sakura also leads a strange callisthenics session on the beach each morning which Taeko is encouraged to join as well as constantly being offered Sakura’s shaved ice which she always declines.

There isn’t much to do in this strange place, Yuji, Sakura and another woman who isn’t a guest but hangs round all the time anyway are convinced Taeko has come for the purpose of “twilighting” which Taeko doesn’t quite understand and they refuse to elaborate on but apparently this weird island is very good for it. Getting sick of these strange people and their odd habits Taeko decides to just check out and try another hotel. BIG MISTAKE. The other hotel on the island turns out to be an even more bizarre cult commune which makes Yuji and co seem much more appealing all of a sudden. Returning humbly to the extremely relaxed hotel and sacrificing her suitcase in the process, Taeko finally begins to embrace the odd ways of the island and open herself up to its benign indifference.

However, part way through she’s rudely interrupted by one of her students who’s managed to track her down despite her having chosen this place specifically for its remoteness and lack of cellphone signal. Yomogi (Ryo Kase) takes to the weird ways of the island like a fish to water, in fact his hipsterish adaptability is a little odd in itself, but against expectations his arrival only slightly irritates Taeko and creates no major drama of its own. The mystery of the overly jealous hanger on, Haruna (Mikako Ichikawa), is partially solved towards the end though her gentle possessiveness of the inn bound family and passive aggression to Taeko’s gradual acclimatisation is also more of the comic variety and eventually works itself out in a gentle way.

“Gentle” may well be the best way to describe Megane. Someone should probably market a “calm” mix which consists entirely of the relaxing island sounds of this film. These people take things slow and are all the happier for it. They know the pleasure of a sunset, shaved ice on the beach on a sunny day, drinking beer outside or enjoying a barbecue with friends. Mellow to the core, Megane is the ideal way to find your own spot of serenity at the end of a busy day and is sure to ease even the heaviest of hearts with its subtle, absurd humour.