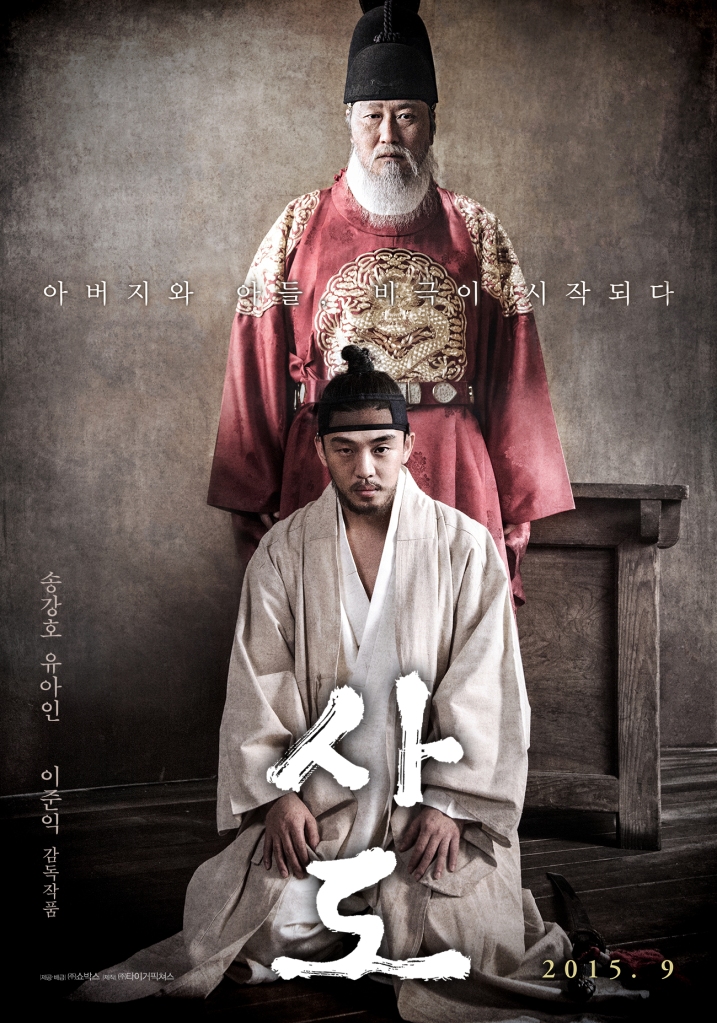 Which one is worse, the son who tries to kill his tyrannical father, or the tyrannical father who executes his own son and heir? A collection of sad stories all round, Lee Joon-ik’s The Throne (사도, Sado) is a historically inspired tale of familial conflict played out on a national stage. Where another nation might have entered into a bloody civil war, this very private tragedy keeps its bloodshed within the palace walls but still does not lack for cruelty.

Told in a non-linear fashion, The Throne takes inspiration from the 1762 incident in which the ageing King Yeongjo has the Crown Prince, his son later named Sado, executed in the most brutal of ways – confinement inside a heavy wooden rice chest placed inside the castle courtyard where he will be denied food and water until events take their natural course. In flashbacks we see that the king did love his son once but as the boy grew older and became something other than what his father desired of him, his love turned to disappointment and then to fear and disgust. The legends say that Sado was a madman – a murderer or deviant who needed to be eliminated, or just the victim of a conspiracy, but his anger with his father is easily understandable even if it hadn’t been for a seemingly crucial episode where he was forced to endure a feat of painful endurance which almost cost him his life and, perhaps, provoked something akin to madness.

Yeongjo is an austere man, devoted to scholarship. He began Sado’s kingly tutelage at just two years old but even if he was a bright little boy he eventually grew bored with his father’s educational regime of dull rote learning and constant tests preferring the relative freedom of outdoor life with swords and arrows and far less judgement. Sado likes to paint too, but this also falls under his father’s definition of pointless frivolity and so is just another thing which earns him nothing but disdain from the man who would make him king.

Things come to a head when Yeongjo suddenly declares he wants to retire as a ruler and abdicate in favour of his son who is anything but ready. Settling on a regency agreement sounds like the ideal compromise but turns out to be quite the reverse as Sado is merely a stooge for his father who only uses the situation to perpetually humiliate him in front of his courtiers. Sado himself has different ideas to his father about how things should be done in that his father’s emphasis on keeping peace at court had largely resulted in deferring to the more powerful lords at the expense of the poor which is one way to rule country, but perhaps also the most selfish.

When Sado has a son who seems to be everything his father isn’t, tension only rises as Yeongjo first rejects the boy as an infant only to later seek deposing his son in favour of his grandson. Simply put, Sado is now surplus to requirements and despised by his father who also happens to be the king so things are not looking good for him even if he hadn’t descended into a kind of madness which, like Hamlet, briefly cleared and allowed him to stay his hand rather than kill a king where compassion proved his weakness.

Added to the historical intrigue and the tragic misunderstandings between fathers and sons, The Throne adds in a comment on the vagaries of rigid social systems which set out correct and incorrect ways of living, even down to the the ties on the hem of a pair of trousers. Sado wasn’t cut out for his father’s life of dry book learning and calculated appeasement. He was an artist and an athlete – a man of action who might have made a fine king at any other time but could never have been what his father wanted him to be (which was essentially just another version of himself). Yet no deviation can be permitted in this extremely regimented kingly court where a single misspoken word or misplaced action can be enough to seal your fate.

When prompted for a kind of explanation at the end of the film, Sado repeats one of the teachings from his father’s books – that in the end laws and decorum are less important than the men that stand in front of them. He placed the man before the idea but was not rewarded with the same degree of feeling – only a cold and dispassionate application of the law. In part an exploration of a historical event which is both personal and national tragedy, Sado is the time old story of a father and son who are unable to understand each other, snatching only a few brief moments of connection before the inevitable separation. A partial posthumous pardon only serves to deepen the tragedy of a son driven mad by his father’s unpredictable cruelty and even if the film ends on a note of melancholy reconciliation with the past, the central message of fathers attempting to force their own world on their unwilling sons is one that rewrites itself with each passing generation.

Reviewed at a “teaser” screening for the London Korean Film Festival.