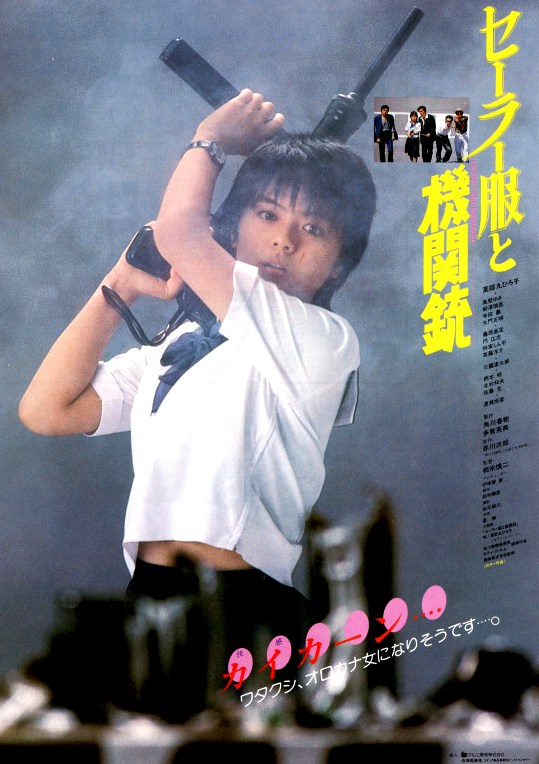 For good or ill, Haruki Kadokawa’s entry into the film industry was to have a profound effect both culturally and commercially. Rising from the ashes of the studio system, Kadokawa’s stable of cute and perky idols presented him with the opportunity to build a multimedia empire formed of a union between cinema, books, and music in which each could be used to sell the other.

1981’s Sailor Suit and Machine Gun (セーラー服と機関銃, Sailor-fuku to kikanju) was one of his earliest successes and helped to solidify his approach. Featuring one of the biggest idol stars of the 1980s, Hiroko Yakushimaru, in her most iconic role, the film adapts a Kadokawa teen novel as its source material and includes an end credits song with the same title sung by the film’s star. It was a winning formula, but then Sailor Suit and Machine is not just another idol movie. Directed Shinji Somai whose work is much more well known in Japan than it is abroad, this strange story of a high school girl and her unlikely role as a yakuza boss is both a surreal coming of age tale and an arthouse influenced character piece which came to become the defining youth movie for a generation of female cinema goers.

Izumi Hoshi (Hiroko Yakushimaru) is now an orphan. Her mother died some time ago and today is her father’s funeral. Thinking herself all alone in the world, Izumi is surprised when an older woman, Mayumi (Yuki Kazamatsuri), suddenly appears with a letter from her father claiming he asked her to look after his daughter if anything should happen to him. More surprises follow when her school is surrounded by black suited yakuza. Prophetically, the other students are terrified but Izumi marches straight up them to find out what’s going on. As it turns out, they’ve come for her – an uncle of Izumi’s father was the head of a yakuza clan and now that he’s dead they need a blood relative to succeed him. Izumi’s father out of thte picture, the position falls to his daughter, teenage high school girl or not. At first she refuses but realising that with no boss the guys will all have to die, Izumi relents and orders them to live. So begins her long, strange, not altogether successful career as the head of moribund clan of dejected yakuza.

In many ways, Sailor Suit and Machine Gun is a parody of a standard yakuza flick in which rival groups vie for power in the crowded backstreets of a busy city. The idea of a tiny 17 year old girl heading up an organised crime syndicate and going toe-to-toe with grizzled fifty year old veterans is an inherently absurd one as exemplified by Izumi’s courtesy visit to the area’s most powerful gang boss in which he he more or less laughs her out of the office.

Despite the incongruity, Izumi is a tough kid and more than holds her own in the very male underground world. In her father’s letter to Mayumi, he describes his daughter as tough but naive – an analysis which proves true in her tenure as a yakuza boss. There is a degree of silliness in her actions, playing the role assigned for her as if acting a part in a movie but as her guys start getting knifed it suddenly doesn’t seem so funny after all. The film revolves around a mcguffin of some missing heroin which belongs to a gangster named Fatso but is also sought by rival gangs. Out of her depth, Izumi has no knowledge of the whereabouts of the missing drugs or even the reason why anyone would want them. This is a situation that can’t be blustered through and Izumi does not have the ability to navigate it.

The idea of an ordinary high school girl plunged into the criminal underworld is as ridiculous as it’s intended to be. However, Izumi is not quite the ordinary high school girl she first appears. Gangly and boyish, she is supported by three male friends who often flank her as entourage but always recede into the background, bowing to her leadership. Already dominant and possessing obvious leadership potential, Izumi’s bold decision to approach the yakuza at the school gates also hints at her curious and fearless personality, even if it also speaks to her youthful recklessness.

These more masculine qualities of forcefulness and dynamism as opposed the stereotypical image of the cute and submissive school girl are perfectly suited to her new life as a crime boss but for all of that her leadership takes on an oddly maternal quality. A wounded foot soldier remarks that Izumi smells like his mother as she’s awkwardly winding bandages around his torso, and the guys flock around her like they would the family matriarch. Tellingly Izumi later tells Mayumi that part of the reason she rejected her was because of her extreme femininity – something the adolescent Izumi did not quite know what to do with, especially given the maleness of her new environment.

Izumi’s short lived career in the yakuza cannot be termed a success in the normal manner of things, she acts honourably and may win a final victory but it comes at great cost. When Izumi finally picks up the machine gun of the film’s title for the intense finale, she finds herself enjoying it a little too much as the word “fantastic” escapes her lips seconds after letting rip intro a rival gang boss’ office. Rather than the romantic awakening which is the climax of many female centred teen movies, Izumi’s major consummatory event is with her machine gun. As she puts it at the end, Izumi’s first kiss goes to a (deceased) middle aged man and she looks set to become a “foolish” woman, her path into womanhood has been an unusually transgressive and as yet unresolved one.

Somai’s camera is is both slippery and precise as he casts us as voyeur in Izumi’s world, shooting through exterior windows and even at one point from behind the shrubbery. Preferring long takes and often at extreme distances, Somai mixes static camera with unusual fluidity for an effect that’s far more arthouse influenced than your usual teen idol picture. As with many of Kadokawa’s ‘80s movies, the film is steeped in the naivety of the teenage world view as Izumi goes about her new life with a kind of fearless determination despite the inherent violence and unexpected adult sexuality. A deserved classic, Sailor Suit and Machine Gun is the archetypal Kadokawa movie, creating a vehicle for its idol star in the fascinating, iconic presence of its central heroine whilst simultaneously generating an enduring pop culture phenomenon.

And here’s star Hiroko Yakushimaru singing the title song at her 35th anniversary celebration concert in 2013: