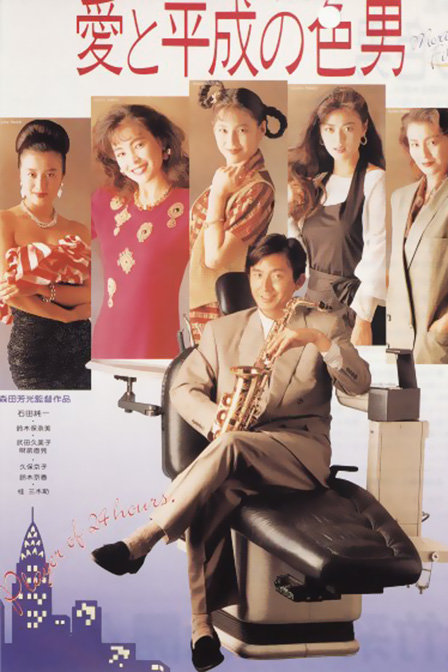 Yoshimitsu Morita is an enigma. While directing some of the most acclaimed Japanese films of the 80s including The Family Game or the Soseki adaptation Sorekara, his primary dedication was to the “popular” which meant he did his share of more commercial projects such as the Kadokawa idol movie Main Theme or Banana Yoshimoto adaption Kitchen. As might be discerned from the title, 24 Hour Playboy (愛と平成の色男, Ai to Heisei no Irootoko) is among his more populist efforts and is most concerned with capturing the unique quality of its time as mid-bubble Japan said goodbye to the traumatic Showa era for the (hopefully) more prosperous Heisei.

After opening with a series of scenes of the luxury to be found in the modern era from expensive rolexes to elegant yachts, the film zooms in on its hero, Nagashima (Junichi Ishida), as he receives a call from his girlfriend to the effect that she will be visiting him shortly. However, Nagashima’s first action is to leap over his balcony and run down the hill below to hide out in his car and play his saxophone before taking refuge at his younger sister’s place. Nagashima has a serious problem in that he finds himself unable to sleep and is longing for a woman who can really tire him out. Consequently he’s become the “24 hour playboy” of the title, flirting with women here there and everywhere all day long hoping to find the one who can send him straight to bed.

Unusually for a film set in the age of consumerism, Nagashima is not a high powered executive or something more glamorous like an actor or a singer, he is, in fact, a dentist. When not inappropriately flirting with the young women who end up in his dentist’s chair, Nagashima also has a sideline as a jazz saxophonist which seems to be what he’d really like to do with his life but presumably is not as lucrative as the unexpectedly elite world of dentistry.

The consumerist society runs as background throughout the film as Nagashima enjoys a fairly upscale lifestyle perfect for a playboy with visits to trendy nightclubs and late night driving ranges, but the film also gets a lot of milage out of the literal change in era occurring just at the time the film was made. The traditional Japanese dating system takes its name from the emperor – the Showa era began in 1926 and was witness to both Japan’s tragic affair with militarism and expansionist warfare and the beginnings of its return to prosperity in the now nostalgic ‘70s and ‘80s. With the death of Hirohito in January 1989, his son Akihito assumed the throne and began the “Heisei” era. The film was released in 1989 but “Heisei” is referenced several times throughout both as a joke on the fact that “Heisei” means “peace everywhere” and in Nagashima’s comments that some things have already improved in the extremely young new regime.

In keeping with Morita’s determination to stay up to the minute, the film is very much of its time but paints its transitional moment as one of excitement and possibility but also of confusion and inertia. When Nagashima tells a late night barman that he doesn’t know what he wants, he’s talking about more than drinks though he seems happy enough with the gimlet the bar tender picks out for him. Nagashima’s insomnia is apparently caused by not having a good woman to share his bed, but he spends the film playing four women off against each other without ever being really serious about any of them.

After his sometime girlfriend whom he ran out on in the beginning starts talking marriage, Nagashima hatches a plan to get his sister to pretend to be a religious nutcase to put her off. Later he gets another girlfriend to pretend to be his wife and mother of his three children to rid himself of one of the others, gets rid of another by telling her he’s off to “dentists without borders”, and even ends up treating two of his simultaneous girlfriends at the same time in adjacent dental surgeries. Nagashima’s behaviour is caddish in the extreme, thinking only of himself and never really seeing the women in front of him as entities separate from their relationship with him.

A throwback to feckless ‘60s male heroes whose casual womanising represented aspirational male fantasy, Nagashima’s exploits are depicted in a light hearted and humorous way eased by the fact that the women don’t seem to mind very much even after they discover that they aren’t Nagashima’s one and only. Eventually outed as a love rat in the papers, Nagashima’s accidental fame, far from causing outcry and condemnation, attracts a vast crowd of ladies wanting in on the action for themselves.

Oddly the one woman Nagashima does seem to be able to connect with is his sister whom he ironically describes as the one woman he doesn’t understand. Frequently staying over at her apartment, Nagashima often remarks that he wishes all women like her or that all women were his sister, which is an extremely odd thing to say in the circumstances but she is the one woman he seems to have a fully realised conception of and is able to relate to on a human level.

Necessarily very much of its time – the Heisei era is even referenced in the slightly ironic title, 24hr Playboy is one of Morita’s most disposable efforts but is also a perfect reflection of contemporary society in its increasingly consumerist fervour where dentists can live like playboy millionaires and the sheer abundance of choice leaves young men paralysed with indecision. Nagashima’s playboy lifestyle is mined for comic value as he plays the melancholic hero who doesn’t know what he wants and and so has a massive fear of (and yet intense desire for) commitment, but Morita is always careful to point out his essential ridiculousness as Nagashima’s “Heisei” lifestyle becomes less “peaceful” with each additional girlfriend and the increasingly elaborate excuses needed to jilt them.