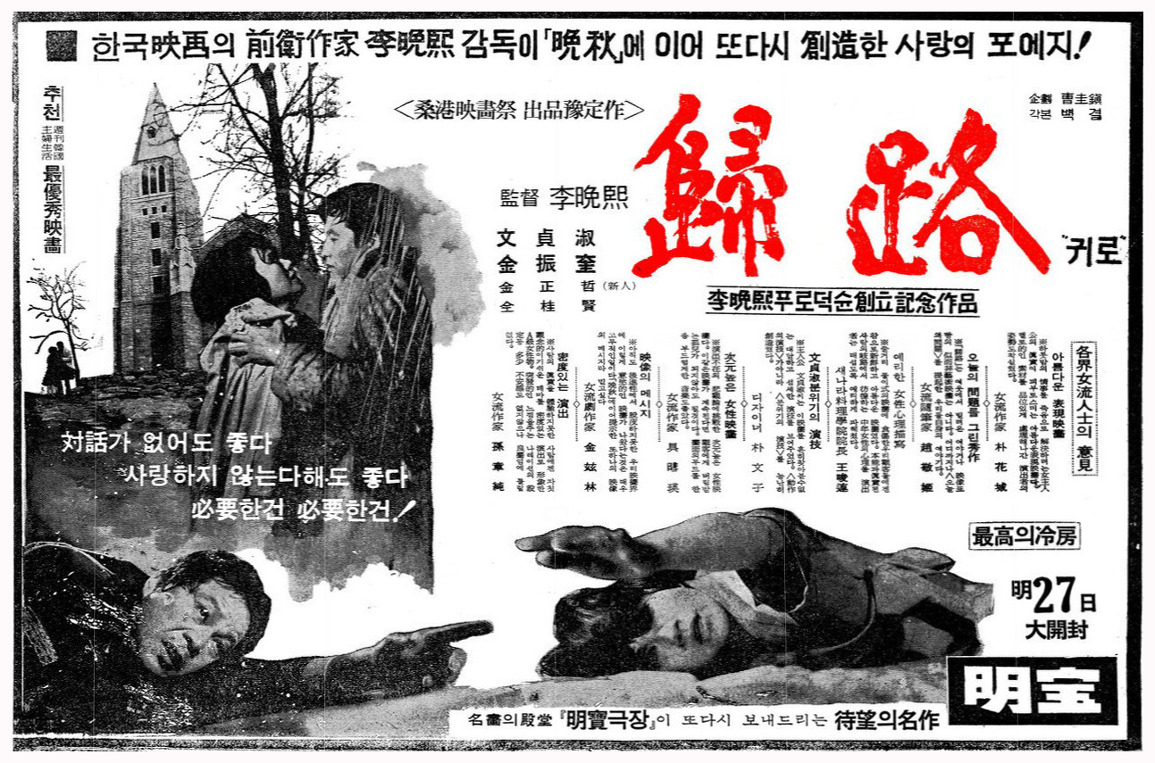 Written by Hayley ScanlonPosted on February 3, 2017November 26, 2019Leave a comment

Lee Man-hee was one of the most prolific and high profile filmmakers of Korea’s golden age until his untimely death at the age of 43 in 1975. Like many directors of the era he had his fare share of struggles with the censorship regime enduring more than most when he was arrested for contravention of the code with his 1965 film Seven Female POWs and later decided to shelve an entire project in 1968’s A Day Off rather than tailor it to the concerns of the day. For these reasons it’s not difficult to read a political message into Lee’s 1967 tale of the (im)possibility of escape from a moribund marriage, Homebound (歸路 / 귀로, Gwiro). Like her country, Ji-yoen finds herself at a crossroads in the battle scarred post-war world which asks her to choose between a life of miserable servitude in fulfilment of her duty or one of accepting the painfulness of public disapproval in choosing to strike out for a happier future.

For fourteen years, Ji-yeon (Moon Jeong-suk) has been more caretaker than wife to her paralysed war hero husband, Dong-u (Kim Jin-gyu), who is so absorbed in his own sense of impotence that he has almost come to resent the extreme sacrifice he feels his wife has made for him. Dong-u is now a writer earning his living through serialised newspaper stories which at least affords Ji-yoen the opportunity of frequent trips into the city to deliver his manuscripts and meet with the publishers.

As it happens, the novel Dong-u is currently writing has a meta-dimension in that it’s extremely close to his own life. The ongoing story of a paralysed writer and his “saintly” wife who endures all hardships to stay at her husband’s side has proved popular with readers but now the editor is minded to warn Ji-yoen that some are becoming bored with the wife’s unrealistic goodness. They want something more human, he says, that sort of devotedness is nothing short of dull. Offended (the editor is almost talking about her real life, after all), Ji-yeon storms out leaving her bag behind. A young reporter, Gang Uk (Kim Jeong-cheol), runs out after her and becomes instantly smitten. This fateful meeting will lead to a number of subsequent ones but like the heroine of the story the jury is out on whether Ji-yeon should leave her embittered husband for a better life with a younger man, or accept the vow she made as his wife and stay by his side no matter how unhappy it will ultimately make her.

Ji-yeon’s life is undoubtedly a difficult one despite her frequent protestations that she’s happy with her husband and could never love anyone else. Dong-u is forever trapped in the past, dreaming of his military glory and unable to accept his new life to move forward into the increasingly modern world. An early scene sees Ji-yeon deliver a letter congratulating him on the fourteenth anniversary of his wartime service. Dong-u asks Ji-yeon to help him into his uniform after which he puts on a recording of a parade and attempts to stand and salute only to immediately fall over, leading to a brief flashback of the battlefield as Ji-yeon cowers to the side, only later lifting the needle to end the ordeal.

Trapped within his own history, Dong-u berates himself for his physical failings in being unable to be a “full” husband to his self sacrificing wife. The couple have separate bedrooms and share no particular intimacy, barely even friends let alone husband and wife. Dong-u’s bitterness is all encompassing, claiming to be in regret of a sacrifice he feels has been made on his behalf which only brings him additional guilt for destroying his wife’s future happiness as the childless wife of a paralysed man. This same internalised frustration leads him to treat Ji-yeon coldly in intense resentment for the way in which she forces him to feel all of these negative emotions.

Receiving affection only from the family dog, few would blame Ji-yeon if she did find herself a way out through romance. Even Dong-u’s sister who confronts Ji-yeon after catching sight of her with Gang Uk expresses sympathy for her situation, but urges the couple to divorce in order to prevent greater suffering further down the line. Ji-yeon is torn between her uncertain feelings for Gang Uk and her duty as a wife to her husband. At one point, Ji-yeon asks a question about who in the world is the most unfortunate only to answer that it is the person who can neither be respected or hated. She can’t bear the idea of being the woman who abandoned her disabled husband for a younger man, but neither can she endure untold years of respect as his devoted wife trapped in that lonely, claustrophobic house forever.

Torn between modernity in the form of her young lover, and tradition in the form of her embittered former soldier, Ji-yeon is in a similar dilemma to her nation as she looks out at a transformed Seoul standing ready to strike out onto the world stage only to return home to her dark and dingy Incheon cottage which almost seems to exist in the never was of fourteen years before. Her final decision is an ambiguous one, paralysed in indecision as she longs for forward movement but is terrified to accept it. Lee’s film is subtle and subversive, not least in its social messages which lean towards individual freedom and happiness over duty bound tradition even whilst suggesting that those two ideals may be impossible to achieve. Shot in a crisp black and white, Homebound is a study in alienation with its claustrophobic angles and wide sweeping shots of the prospering city which seems to warn that those caught between the past and the future are likely to find themselves crushed by fear and memory in equal measure.