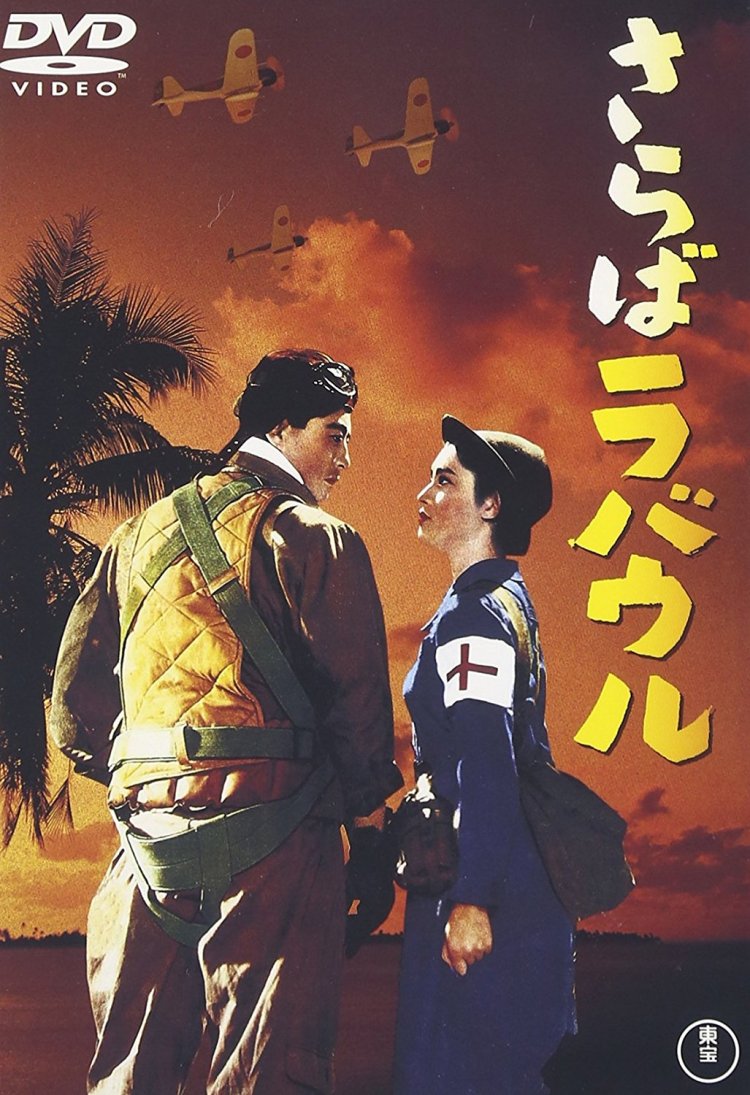 Released in 1954, Farewell Rabaul (さらばラバウル, Saraba Rabaul) was the last in a string of war films directed by Ishiro Honda for Toho immediately before the mega hit Godzilla redefined his career and turned him into a director of science fiction and special effects movies. Like the later tokusatsu classics, Honda worked alongside Eiji Tsuburaya to craft the film’s effects which are largely used to recreate the epic dogfights taking place over the island as the airmen and ground crew come to terms with the imminent arrival of American forces. Though he takes care to show the bravery and determination of the Japanese pilots, Honda’s attitudes to the war and the government who waged it are not so kind.

Late into the conflict, at an outpost in the Papa New Guinean city of Rabaul, ace pilot Captain Wakabayashi (Ryo Ikebe) leads a rapidly depleting squad of airmen trying to defend Japanese forces from American air attacks. Known as “Devil” Wakabayashi, he rules with an iron fist – taking issue with men who spend their time in local bars and pointedly refusing to send rescue craft for crashed pilots. Ruthless and cold as he seems, the war is starting to get to Wakabayashi and his resolve crumbles when faced with a gracious American POW and the attentions of a kindly nurse, Komatsu (Mariko Okada).

Honda keeps the action to a minimum, preferring to focus on the life within the military base. Though the effects on the local population are not much addressed, the opening scenes take place in a bar in which Papa New Guinean women dance to tribal drums while Japanese military personnel drink and watch. The waitresses are largely Japanese women dressed in kimono, though it seems the exoticism of local girl Kim (Akemi Negishi), dancing barefoot with flowers in her hair, is the main draw. Eventually Kim falls in love with a Japanese soldier and the two plan to flee but fate always gets in the way.

Wakabayashi, rechristened the “Devil” by Kim – a nickname which seems to stick, objects to his men blowing off steam in the bar for purely practical reasons – he needs them at top form for an upcoming mission and a hungover pilot could be a risk to the entire squad. Walking around looking sullen and refusing to explain himself, it’s no wonder Wakabayashi is unpopular with some of the men even if his skills are widely recognised. Asked to send a rescue squad for a lost pilot, Wakabayashi’s reply is a flat no with no further details offered. Only when a junior officer interjects during a briefing does he offer his reasoning – the crash site is in enemy territory and it’s too risky to send more men in to fetch one pilot who is probably already dead. His reasoning is sound and probably the correct command decision but the cutting coldness with which he delivers his judgement does little to assuage his reputation as a heartless misanthrope.

This is, however, not quite the case. When an extremely young member of his squad is shot down Wakabayashi shouts out to him, trying to advise the rookie on ways to control the aircraft but all to no avail. The pilot cannot bail out as Japanese pilots, particularly those flying the featherweight 0 fighters, are not equipped with parachutes. This is brought up again when a downed American pilot is brought in as a POW. The journalist attached to the unit is able to speak fluent English and interprets for Wakabayashi and the others as the American gives them an improbably frank analysis of Japanese airborne warfare. He tells them that the Americans were once afraid of the 0s and their high speed manoeuvring but have figured out their weaknesses. In the hands of a skilled pilot, the 0 is a powerful weapon but in unskilled hands it’s a liability – its lightweight form makes it easy pickings when the pilot does not know how to fly defensively. If it weren’t for this fighter they call “Devil” they’d be picking them off with ease. The lack of parachutes came as a surprise to the Americans. The 0s need to be as light as possible, but no one could believe that the Japanese government valued life so cheaply that they’d send a man up there with no way down. That’s why, the American says, they will win – no government so unwilling to look after its own could ever expect to.

The senselessness of it all eventually gets to Wakabayshi, even leading him to reverse his original stance and proceed into enemy territory to rescue a fallen comrade himself. He is, however, wounded, his plane damaged, and his friend doesn’t make it. Rabaul falls, and its hero falls with it in a turn which is both melancholy and defiant. Honda refuses to glorify the destruction but ends on a note of sadness, reprising the titular song sung by the women aboard a boat they hope will take them home but that, like everything else, remains so hopelessly uncertain.