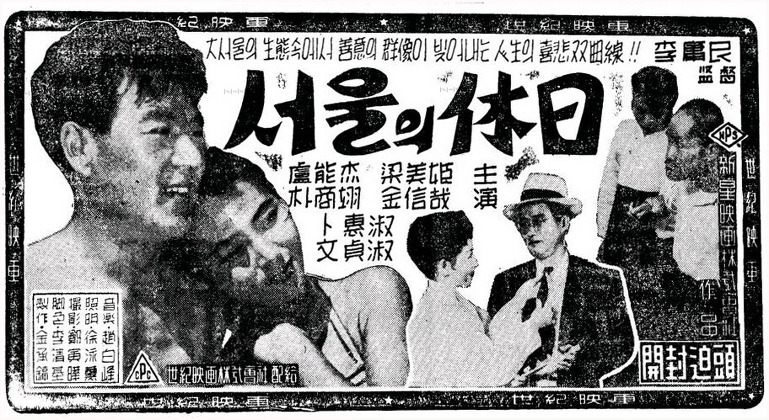 Written by Hayley ScanlonPosted on September 11, 2018Leave a comment 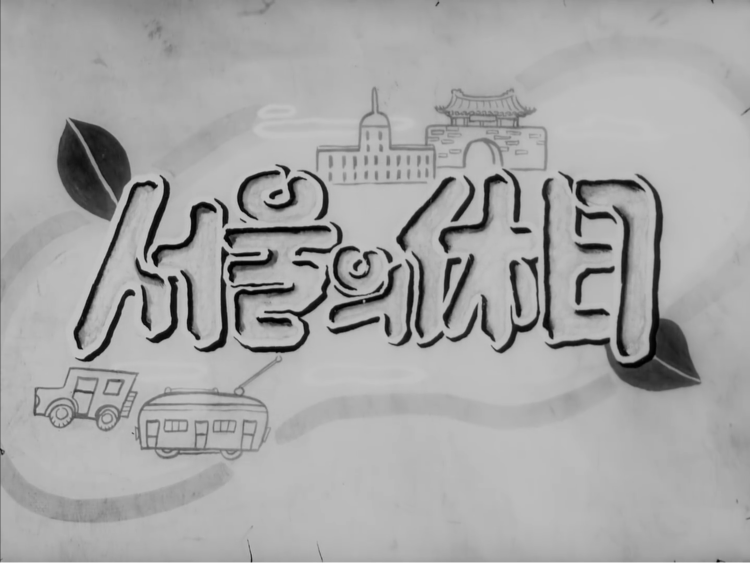 Unlike many “golden age” directors, Lee Yong-min was not especially prolific and left behind him only 23 films when he abruptly disappeared without trace. Perhaps a fitting legacy for a director so strongly associated with the horror genre, but Lee had begun his career as a documentarian working for a Japanese company during the Colonial era. It’s Lee’s documentary background rather than his taste for genre which is most strongly in evidence in his second film, Holiday in Seoul (서울의 休日 / 서울의 휴일, Seoul-ui Hyuil), which, while containing a fair few genre elements, is an anarchic romantic comedy set entirely in a small residential area of the capital over the course one day – a public holiday, in which a series of couples are separated by accident or design on this very day which has been specifically set aside for them to spend together.

Lee opens with a series of location shots of various Seoul landmarks, elegantly composed and somewhat romanticised as if to recast the burgeoning city as a capital of love with all the promise and mystery of Roman Holiday’s Italy which even gets a brief namecheck later on. Again unconventionally, he then breaks into a lengthy POV shot with additional voice over from a narrator who locates a drunk snoozing on a bench and follows him home hoping something more interesting is happening over in the residential quarter. The narrator settles on the house opposite which belongs to a young couple recently married – she an obstetrician running a clinic out of the house, and he a hotshot reporter who’s just made a big splash with a story about a violent murder.

This is, however, a public holiday so work should be strictly off limits. Hee-won (Yang Mi-hee) has designed a packed itinerary, while her husband Jae-kwan (No Neung-geol) would rather have just lazed around at home, but as it turns out neither of them is going to get what they wanted. Minor disagreements about how to spend a rare day off aside, Hee-won and Jae-kwan are a happy young couple who have apparently married for love, are each professionally successful, and are living a comfortable middle-class life in a period of increasing economic prosperity. Their marriage is directly contrasted with the families around them which include that of the drunk we first met on the bench whose daughter Ok-i eventually descends on Hee-won for help in fear she may have fallen pregnant out of wedlock to a man who won’t take responsibility, and a middle-aged couple who have the opposite problem to that of Hee-won and Jae-kwan. Mr. Ju, a regular salaryman, is excited about spending the day with his wife but she skips out on him to go to the beauty parlour and spends most of the day with a wealthy friend and her opera loving toyboys on a well appointed yacht.

Nevertheless, marital bliss is indeed tested by the demands of the day. Though Jae-kwan had promised to go along with Hee-won’s carefully crafted plan, he gets a phone call he thinks is an important tip off about the murder case but is actually a trick set up by his colleagues who were hoping to get him to buy them a few drinks. Unfortunately, due to an odd coincidence, Jae-kwan thinks he witnesses a kidnapping that might be related to the killings and takes off in hot pursuit only to find himself dealing with another sad case of a woman brought low by love. While Hee-won is busy trying to help Ok-i sort out her predicament with both her sad/angry father and the boyfriend that’s thrown her over, Jae-kwan finds himself locked in a room with a poor young girl (Moon Jeong-suk) who is apparently also pregnant by a man who’s disappeared and has gone out of her mind with heartbreak, actively adopting the role of Ophelia and reciting potent lines from Hamlet while absolutely convinced that Jae-kwan is her long absent lover.

While the new freedoms of the post-Colonial era have enabled Hee-won not only to find love and an elected marriage but also a successful professional career as the head of her own clinic, other women have not been so lucky and have suffered doubly at the hands of men who feel bolder in their casual pursuits but also know they cannot be held to account for their actions in the same way they might have been before. Ok-i’s story does at least have a happy ending but is symptomatic of the times in which she lives as she recounts going for a job at a factory only to be molested by the foreman who thought she was a “prostitute” because he found out she had a boyfriend, while the boyfriend sort of thought the same in assuming she had been taken advantage of by the foreman. At least Ok-i has her father who might be have been enraged to begin with but later comes to her defence as does the warmhearted Hee-won, while Jae-kwan’s young woman is all alone save for her mother who is worried sick over her daughter’s mental health and has no real way to help her.

Hee-won is indeed a force for good. Despite her worry about her husband’s whereabouts (she ends up going drinking with his work buddies who, along with her other married female friends, have half convinced her he’s gone off with another woman), Hee-won comes to the aid of a crying little girl who’s desperately looking for help because her heavily pregnant mother is in a very bad way at home while dad went out a few days ago and hasn’t come back. Needless to say, Hee-won’s emergency dovetails into Jae-kwan’s dogged pursuit of crime which eventually sees him arrest a murderer after accidentally getting into a cab with him. The killer, perhaps annoyed about the previous article, makes a point of explaining to Jae-kwan that his job isn’t quite as morally upright as he’d like to believe. You can’t just go printing things in papers, he tells him, it ruins people’s lives. Jae-kwan thinks it’s murdering people that ruins lives so anything after that is fair game but his heartless rationality brings him into conflict with Hee-won when he wants to photograph and interview one of her patients who is seriously ill and might not survive if she finds out the unpleasant truth Jae-kwan wants to get her reaction to on camera. To Jae-kwan, people are just his “subjects”, mere materials for his essays, but to Hee-won they are literally flesh and blood – less fortunate than herself, they are her responsibility and she will do all she can to help them even at great personal cost.

Yet in the end the conflicts resolve themselves satisfactorily and the couples are each reunited in time to spend the last of the holiday gazing up at the moon glowing above the twinkling lights of Seoul. Having spent the day apart, each spouse emerges with a greater understanding of their partner (or in Mr. Ju’s case perhaps just a greater talent for (self)deception) and remains committed to working on their relationship. Mostly shooting on location, Lee’s camera is as sophisticated as they come shifting effortlessly from documentary-style naturalism to a silent movie aesthetic while maintaining a high level of cinematic wit throughout. Cheerfully romantic and carefree even considering its darker themes, Holiday in Seoul is an oddly anarchic romantic comedy though one with total faith in true connection and emotional honesty.