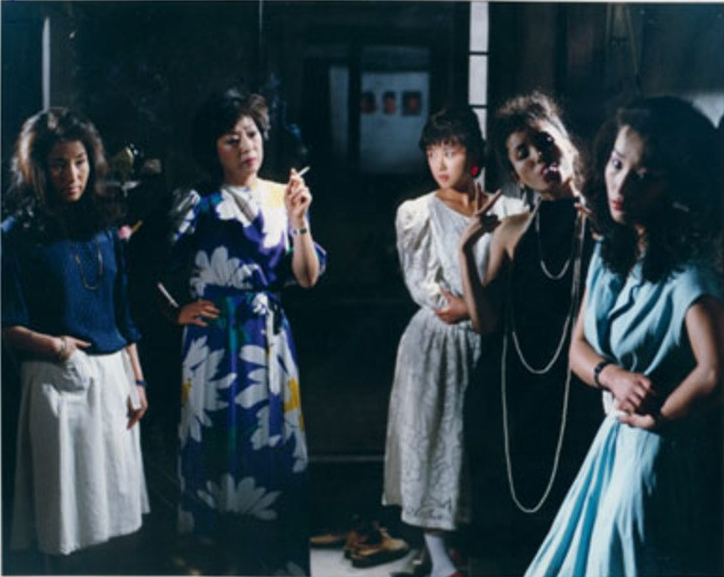 The times may have changed but the double standard is still very much in existence in Im Kwon-taek’s Ticket (티켓). Set in a tabang ticket bar – a delivery coffee establishment in which customers may by “tickets” for unspecified “services”, Ticket follows five ordinary women in Kangwon Province who’ve found themselves trapped in the world of casual sex work for various different reasons but each dreaming of finding something better in the difficult mid-80s economy.

Im opens with stern madam Ji-suk (Kim Ji-Mi) selecting three pretty girls from an employment office to work at her bar in rural Kangwon Province. As she explains, the cafe is located in a quiet port town and mainly caters to seamen and tourists. Ji-suk views refinement as one of her selling points and so she expects her ladies to mind their manners and avoid vulgarity. The girls were given an advance on their wages as a signing bonus, but are technically indentured servants until they pay it off which may take some time seeing as Ji-suk is fond of adding fines onto their accounts should they break any of her rules or request any additional advances for work related expenses such as medical fees, clothing, or cosmetics.

While two of the new recruits, Miss Hong (Lee Hye-young) and Miss Yang (Ahn So-young), have had experience of this type of work before, Se-yeong (Jeon Se-yeong) is much younger and struggles to come to terms with the nature of the job, frequently incurring Ji-suk’s wrath by running out on clients who get fresh. Miss Ju (Myeong Hui), who has been working at the tabang for three years with ballooning debts, tries to warn the girls that in order to avoid her mistakes they should abide by three rules – cash only, no mercy, and no repeats. All quite sensible rules in theory but difficult to enforce in practice.

Unlike Miss Hong and Miss Yang who’ve come from impoverished rural backgrounds, Se-yeong is from Seoul but has found herself responsible not only for her immediate family but also for her down on his luck student boyfriend Min-su (Choi Dong-joon) who is currently studying to become a teacher but struggling to support himself. Min-su, not the sharpest knife in the drawer, hasn’t quite figured out that the girls don’t really just deliver coffee but in any case remains conflicted over his dependence on Se-yeong for money. Still struggling to accommodate herself to sex work, Se-yeong eventually decides to seduce a friendly sea captain as a means of easing herself into it while also trying to get Min-su a job on his boat.

Meanwhile, Miss Yang dreams of becoming an actress and is naive enough to think sleeping with a famous actor will help, and Miss Hong concentrates on being the best but usually ends up getting herself into trouble. Miss Ju, a divorcee, misses her son while Jin-suk turns out to have a sad story of her own in which she was driven into sex work after her husband, a dissident poet, was picked up by the authorities in less liberal times. Unable to bear the shame she left him, but still harbours hope he may find her again only to have that hope cruelly dashed with the stark message that life is like a bus – if you miss it, it won’t come back for you. Each of these women has, in a sense, already missed a bus and is stuck in Kangwon for the foreseeable future with no clear way out.

Though Jin-suk seemed the toughest and the least sentimental of the ladies, it’s she who wants “forgiveness” most of all which is perhaps why she goes to the trouble of taking Min-su to task for his unreasonable treatment of Se-yeong. Pointing out that nobody chooses this way of life freely, Jin-suk snaps on realising that there really are no sympathetic men and all now view her and her girls as “dirty” while continuing to use their services. Im closes with an improbably happy ending, if ambiguously, which promises a more positive future for each of our ladies as they manage to find ways out of the rural sex industry and into something more hopeful but even this abrupt tonal shift only serves to reinforce the miraculous nature of their sudden opportunities in a society which appears to remain hostile to their very existence.

Ticket was screened as part of the 2019 Udine Far East Film Festival. It is also available to stream online via the Korean Film Archive’s YouTube Channel.