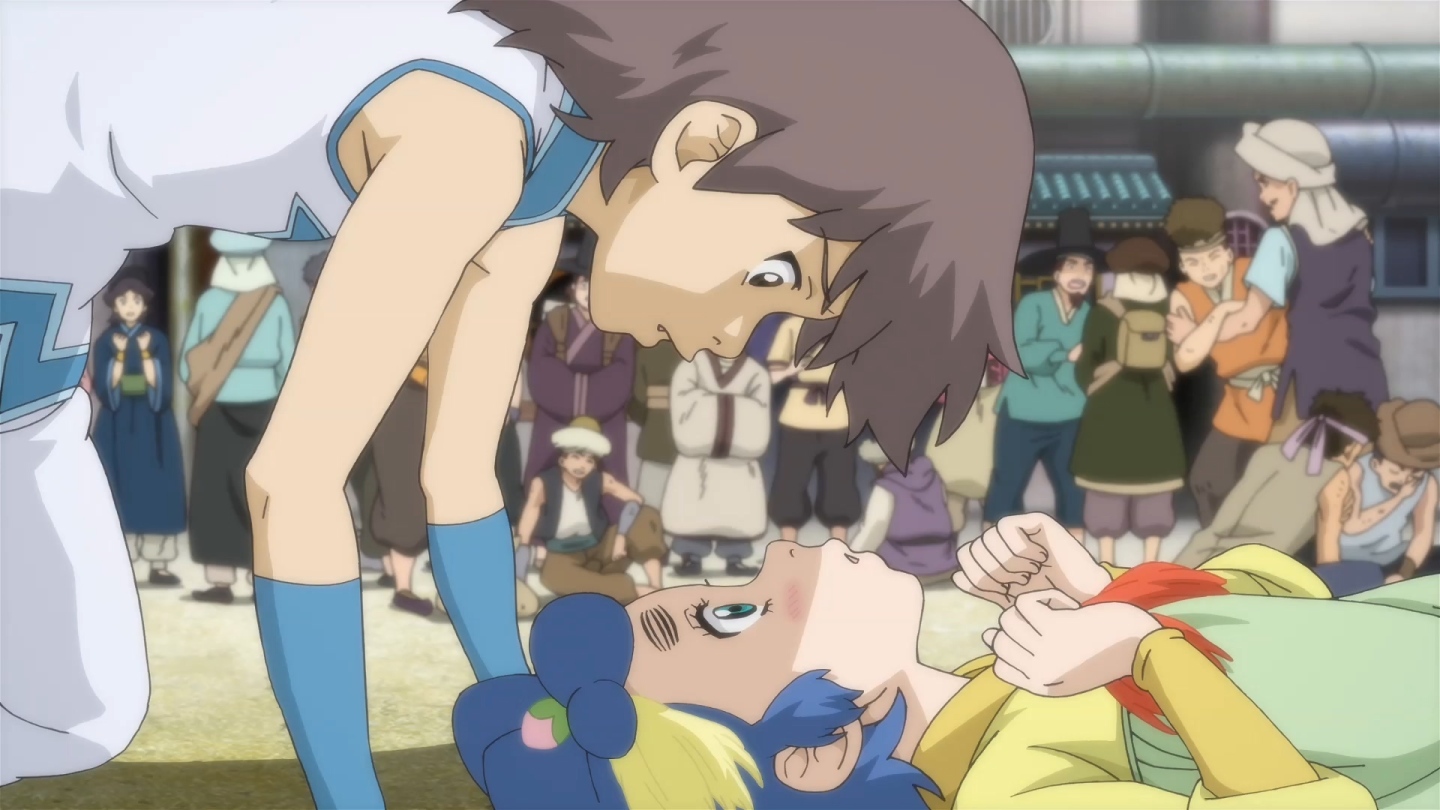 Written by Hayley ScanlonPosted on August 15, 2019

Night is dark, but when you have the moon to light the way there is always the hope of a better tomorrow. When all hope is gone, how are you supposed go on? For a small group of villagers, the answer is to do the best they can, staving off the darkness with determination and guile. Directed by Japan’s Takahiro Umehara making his directorial debut, The Moon in the Hidden Woods (숲에 숨은 달, sup-e sum-eun dal) is a story about learning how to survive the darkness but also an oblique allegory about authoritarian corruption and the power that comes with embracing your essential identity.

As the wise old granny tells us at the beginning, long ago the Moon watched over the villagers, protecting them from the terror of night, but then it suddenly disappeared. A terrifying monster, Muju, wrapped the night sky in red, devouring misfortunes and sending fearsome minions to plague mankind. Warriors set out to look for the Moon, but none returned. Meanwhile others learned how to profit from the new world and saw no need for a return to the past until gradually people forgot there had ever been a Moon to begin with.

One such profiteer was the evil Count Tar, who is determined to marry the Princess Navillera very much against her will. Escaping to the city, Navillera finds herself coming to the rescue of a musical trio caught up in an unfair competition to win some mystic water to use in their harvest festival, and making use of her telepathic super powers and natural musical ability at the same time. The Nova Folk Band are a small group of illegal meteor hunters from the village who are more interested in survival than they are in intrigue, but are nevertheless some of the only people still looking for the Moon. In any case, they end up taking Navillera with them as they flee, not quite believing that she is a princess and the intended bride of their tyrannical ruler.

While in the village, Navillera gets a crash course in class conflict, never having left the palace before and spent her entire life in a lavish comfort she assumed was available to all. This quickly puts her into conflict with musician Janggu who deeply resents the “spoiled” entitlement that sees her asking for extravagant luxuries like meat, fruit, and honey, while being entirely unused to farm work. She does, however, try her best even mucking in with the other villagers where she can but is obviously unable to contribute to the same degree given that she has never had to do a day’s work in all her life. Meanwhile, as Janggu points out, the gang have gone out hunting meteors full in the knowledge that it’s illegal because they need them to survive. The princess objects to their reckless lawbreaking, affirming that the kingdom will protect them with ore only for Janggu to point out an ore is worth half the year’s harvest and the only reason you’re not allowed to hunt meteors is so that the unscrupulous powers that be can sell you an alternative and thereby keep a grip on their power by keeping the poor in their place. Suddenly, Muju isn’t looking so much like a scary red monster but an eerie metaphor for late stage capitalism.

Meanwhile, the Navillera is also busy trying to escape an oppression she wasn’t even quite aware of in her attempt to reject the intentions of Tar. Through her time in the village, Navillera begins to lose heart, fearing that her cosseted life has left her powerless without skills or talents. What she discovers, however, is that she has a natural ability for dance that finds a perfect home in the cheerful village where such things are praised and becomes the key both to restoring her essential identity and defeating Muju to rediscover the Moon.

In opposition to the “nothingness” that Muju represents, Navillera draws strength from the camaraderie of the villagers as they adopt her as one of their own, urging her not to give in and marry the evil Tar but to join them in their rebellion, choosing the “path of life” as the joyous music of the villagers finally breaks the stronghold of Muju’s austerity. Finally seeing the light of a better tomorrow, the villagers look back on the past with stoical eyes, recognising that mankind’s greed gave rise to Muju and resolving to forgive those who were merely weak rather than actively evil in order to live on in the light of a new world. A perfect blend of Korean fantasy and Nausicaa-esque steampunk, The Moon in the Hidden Woods is a cheerful ode to the importance of hope and the pure joy of musical expression in a sometimes harsh existence.

The Moon in the Hidden Woods was screened as part of the 2019 Fantasia International Film Festival.