Written by Hayley ScanlonPosted on August 20, 2019 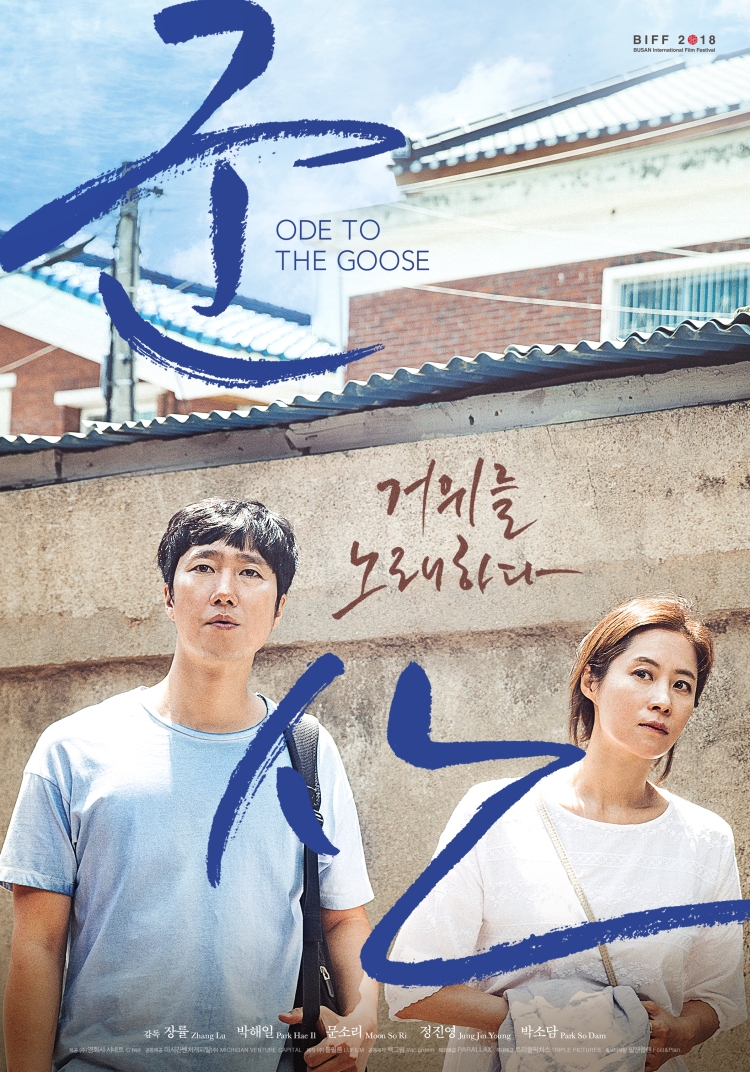 Past and present flow as one in Zhang Lü’s elliptical Ode to the Goose (군산: 거위를 노래하다, Gunsan: Geowileul Nolaehada). Making a perhaps controversial point, Zhang sets the majority of his tale in the harbour town of Gunsan which echoes ‘30s Korea when the nation was still brutally oppressed by the Japanese to which the many graphic photographs and monuments on display stand testament. Yet Zhang seems to ask, returning to his favourite theme, if they’re all Koreans no matter where they were born, why are some more oppressed than others?

The film opens with the hero, struggling poet Yoon-young (Park Hae-il), standing in front of a street map, lost in his mother’s home town. He is then joined by a slightly older woman, Song-hyun (Moon So-ri), whom he has apparently asked to accompany him to Gunsan on a whim without really explaining why. Still hung over from the night before, they stop off at an odd little noodle joint run by an elegant older woman (Moon Sook) who seems oddly fascinated by their strange chemistry. Yoon-young, innocently enough, makes conversation by asking about her home town only for her to shut him down. “What home town?” she fires back, “home is where you settle”.

Later we discover she speaks fluent Japanese, cheerfully conversing with the autistic daughter of the inn owner (Park So-dam) where the couple eventually stay after being judged “lucky” enough to be allowed in. The daughter of Japanese-Korean parents apparently “returned” from Fukuoka, the girl rarely speaks to strangers and only ever in Japanese, though she seems to take a liking to Yoon-young and is keen to try and connect with him, making sure he is always well taken care of while Song-hyun has turned her attentions to the girl’s father, melancholy widower Mr. Lee (Jung Jin-young) who likes to take photographs but only ever of landscapes and not of people.

The Lees are Korean too, even if one of them only speaks Japanese and they run a Japanese-style inn in the middle of a moribund museum to colonial horror (the local shrine even has a comfort woman statue standing in the back). Meanwhile, a passerby mistakes Song-hyun for a Chinese-Korean woman she once knew and insists on speaking to her in Yanbian dialect which Song-hyun, as we later learn, is unable to understand even if there is a Chinese-Korean connection in her family history. Song-hyun muses that had her grandfather, like his brother, chosen to stay in Manchuria after the war then she’d be Chinese-Korean too, as would famed poet of the colonial era Yun Dong-ju if he hadn’t died a political prisoner in a Japanese jail in Fukuoka which is, coincidentally, where the Lees were “from”. It is all “coincidental”.

So why does Yoon-young’s “right wing nut job” (as Song-hyun calls him) father hate Chinese-Koreans so much, blaming them for all the faults of the modern nation and decrying those who left for Shanghai with the Independence Movement as traitorous communist collaborators? A whimsical prequel (or a kind of re-imagining) of the Gunsan incident sees Yoon-young walking through his own “hometown” while a man who probably is not actually Chinese-Korean himself and may just be out to claim a buck or two, holds a rally for the rights of “foreign” Koreans in order to avoid exploitative employment practices and affirm that Koreans from other parts are the same as Koreans from Korea. Are “native” Koreans perhaps oppressing “non-native” ones in the same way that they were oppressed by the Japanese? In practical terms no, obviously not – there are no essential horrors here, but there is deeply ingrained prejudice and wilful exploitation. Interestingly enough, despite his conservatism, Yoon-young’s dad had him attend Chinese language classes, if ones that were run by the Taiwanese who are obviously not “communist” but were also formerly a Japanese colony.

Meanwhile, Yoon-young’s life takes him on a curious symmetry in which everything reminds him of something else. He repeatedly asks the women he meets if they’ve met before, experiences eerily similar moments in Gunsan and at home, and continues to look for connections between himself and a world of universal poetry stretching from the classical Chinese of the film’s title to the melancholy odes of Yun Dong-ju, writing in his “native” language in defiance of colonial authority. Dualities predominate – beauty/horror, attraction/indifference, silence/language, here/there, then/now, but through it all there is commonality. Yoon-young’s failure to communicate leaves him feeling defeated and depressed, trapped in a self-imposed exile while the gregarious Song-hyun gleefully moves forward little caring of the costs. Whimsical and “ambiguous”, Zhang’s playful poetry is difficult to parse but nevertheless carries an essential warmth in its reassuring familiarities and openhearted commitment to the universality of human connections.

Ode to the Goose was screened as the latest teaser for the upcoming London Korean Film Festival. Tickets are already on sale for the next and final teaser screening, Kokdu, which will take place at Regent Street Cinema on 16th September.