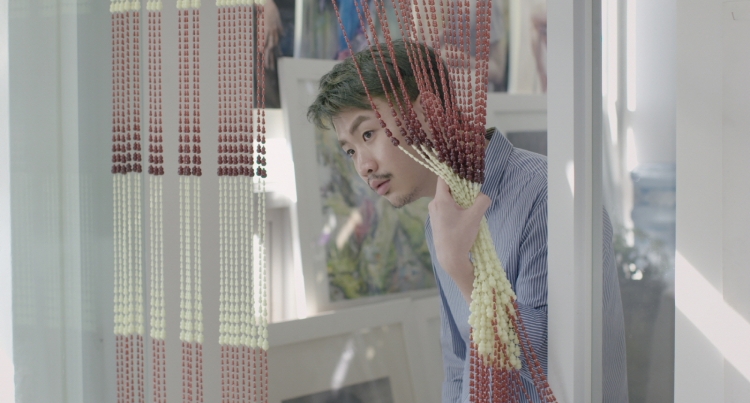 Director Jeong Ga-young has begun to make a name for herself as the female Hong Sang-soo since her indie breakout debut Bitch on the Beach. Unlike Hong, Jeong also stars, taking her meta concepts to a whole new level in her leading role as a typically Hongian feckless filmmaker on the prowl. Where Bitch on the Beach, a monochrome two-hander, found her toying with an ex, Hit the Night saw her experiment with role reversal as a skeevy director “interviewing” her crush about inappropriate topics under the guise of research for a screenplay. In Heart (하트), her latest awkward self-confession, she neatly brings the two together as a conflicted movie director turns to a married man she once had a short affair with to get advice about her crush on another man who is also married.

Ga-young, a 30-ish film director, suddenly shows up at the studio of artist Seong-bum after six months looking for a shoulder to cry on. Some time previously, the pair had a short affair in which Seong-bum slept with Ga-young on the very day that his wife gave birth to their son. Now Ga-young has come looking for someone to talk to about her ambiguous relationship with another married man who has just become a father. Seong-bum is not particularly happy to be consulted on this topic as if he were some sort of expert, but finds himself going along with Ga-young’s whims until they eventually end up having sex on the studio couch.

Ga-young (like the protagonists of Jeong’s previous films) essentially regards men as pathetic and faithless, willing to betray their wives and girlfriends with another woman with nary a second thought. Manipulating them is, partly, a kind of revenge though one that often seems to backfire. Later, talking to an actor about her script which forms the basis of the conversational scenes with Seong-bum, Ga-young outlines her desire to destigmatise affairs with married men. Taking an obvious soap opera scenario but lending it realism and relatability she hopes to open a dialogue for people to talk seriously and without judgement about something that really happens every day. The dialogue is, however, immediately hijacked by the actor who judges her on realising the screenplay is partly (well, largely?) autobiographical in that Ga-young herself has really had relationships with married men. After all, married men Ga-young says, like the Cannes film festival, are apparently something you do so you can tell people that you tried it and it wasn’t all it was cracked up to be.

Ga-young seems to have fallen into the same trap as the director in Hit the Night in assuming the hot young actor would be an idiot but quickly finding herself out of her depth when he begins turning the tables and asking her awkward questions about her screenplay. Talking to Seong-bum about her relationship with the other married man, she tells him that her attraction is largely based on her perception of him as the sexiest man alive along with his persistent vanity in constantly asking Ga-young to tell him that she likes him. Seong-bum thinks the other guy is a jerk for cheating on his wife while they have a newborn baby, conveniently forgetting that he did exactly the same thing himself, later offering only the excuse that his circumstances were “different” when Ga-young reminds him.

In an odd relationship analogy, Ga-young outlines a scenario in which couples are cosmically paired off on separate islands but professes admiration for those who actively defy their romantic destiny to chase love of their own choosing. Probed, however, she proclaims that she herself is waiting on her island for her lover to arrive. Lamenting to Seong-bum that her heart hurts because of all the leftover feelings she doesn’t know what to do with, Ga-young remains passive, allowing herself to be dominated by the judgemental actor while casting herself in the opposite role wilfully manipulating Seong-bum in her screenplay. Yet even within the constructed narrative of the conversations, she undercuts herself by inserting a Korean drama-esque sequence of herself and her married crush accompanied by a swooning K-pop power ballad. The actor sniffily tells her that he doesn’t get the point of making a film like this, that he simply doesn’t see the meaning. That he doesn’t get it might in itself be the point. Ga-young lets her heart lead her where it may and despite herself there is a kind of truth in that, even if its meaning is hard to discern.

Heart was screened as part of the 2019 BFI London Film Festival.