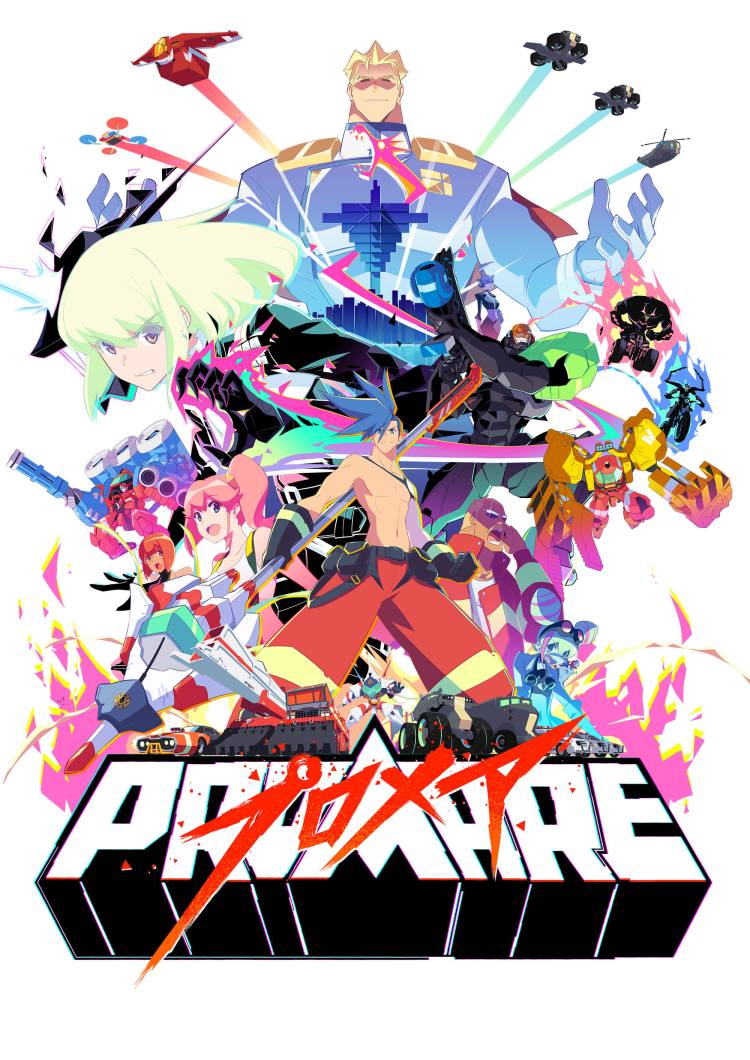 It’s one of life’s ironies, sometimes the best way to stop a fire is to scorch the earth. The heroes of Studio Trigger’s first theatrical feature co-produced with XFLAG, Promare (プロメア, Puromea), are embodiments of fire and ice – a “mutant” who can shoot flames from his fingertips, and a fireman with a “burning soul”. Yet what they discover is that there is a peculiar power in their innate contradictions, actively harnessing the energy of their opposition to combat a man who thinks nothing of burning the world to save his own skin.

Our hero, Galo (Kenichi Matsuyama), is a firefighter with the Burning Rescue squad who has a talent for cheesy one liners and an overinflated sense of confidence in his own abilities. 30 years previously, the world was plagued by a series of strange incidents of spontaneous combustion later attributed to the “Burnish” phenomenon in which some members of humanity developed a mutation that allowed them to manipulate fire. The danger eventually died down, but the “Burnish” as they came to be known continued to exist in society as a kind of oppressed underclass, viewed with fear and suspicion and largely unable to live “normal” lives even if they wanted to. On a supposedly “routine” job, Galo unexpectedly encounters the leader of the Mad Burnish “terrorist” organisation and determines to bring him in, eventually awarded a medal for his pains.

As might be assumed, however, all is not as it seems. The Burning Rescue squad work for Galo’s mentor, Kray Foresight (Masato Sakai), now the governor and an enormously wealthy, influential man thanks to his advances in scientific firefighting technology. Kray reveals that the Earth is sitting on a volatile layer of magma somehow connected to the existence of the Burnish which threatens to destroy the planet if it cannot be properly controlled. This is a kind of justification for Kray’s ultra hardline stance against the Burnish who are hunted down and captured by the Freeze Force (see what they did there?) simply for living their lives even if they have committed no crimes.

Despite the nature of their work, the Burning Rescue squad are a more progressive bunch. They don’t approve of the social prejudice against the Burnish many of whom are just minding their own business and pose no threat to anyone, nor do they approve of the role the Freeze Force seems to play in their society. Mostly what they care about is stopping fires and making sure people endangered by them are eventually saved. They know that the Freeze Force’s persecution of the Burnish is at best counterproductive and fuelling the kind of resentment that makes them want to burn things. Wandering into the Mad Burnish hideout, Galo sees a different side to their struggle and learns a few home truths about his own side from the dashing rebel leader Lio Fotia (Taichi Saotome).

Burning Rescue and the Mad Burnish ought to be opposing poles but display a curious symmetry in their fierce loyalty to their own and emphasis on team work. Others, meanwhile, think only of themselves, coming up with nefarious plans to let the planet burn and move to a new intergalactic home with a starter stock of the most “valuable” 10,000 humans while everyone else succumbs to the flames. The Burnish become merely fuel, sacrificed for a “greater good” for a “chosen few”.

Galo and Lio think they’re “chosen ones” too, in a sense, but are flatly told that their role in events is really just fortuitous coincidence. Nevertheless, the fate of the world depends on their ability to bridge their differences, harnessing the unique capabilities of fire meeting ice against the forces of cold self-interest. Sometimes the only way to stop a fire is to let it burn out bright, which is what the guys discover in trying to find a way to quell that troublesome magma. Recreating the anarchic spirit of Kill la Kill, Studio Trigger’s first theatrical feature is a colourful riot of post-modern absurdity, but has its heart firmly in the right place with a strong progressive pro-diversity message in which we save the world only by saving each other.