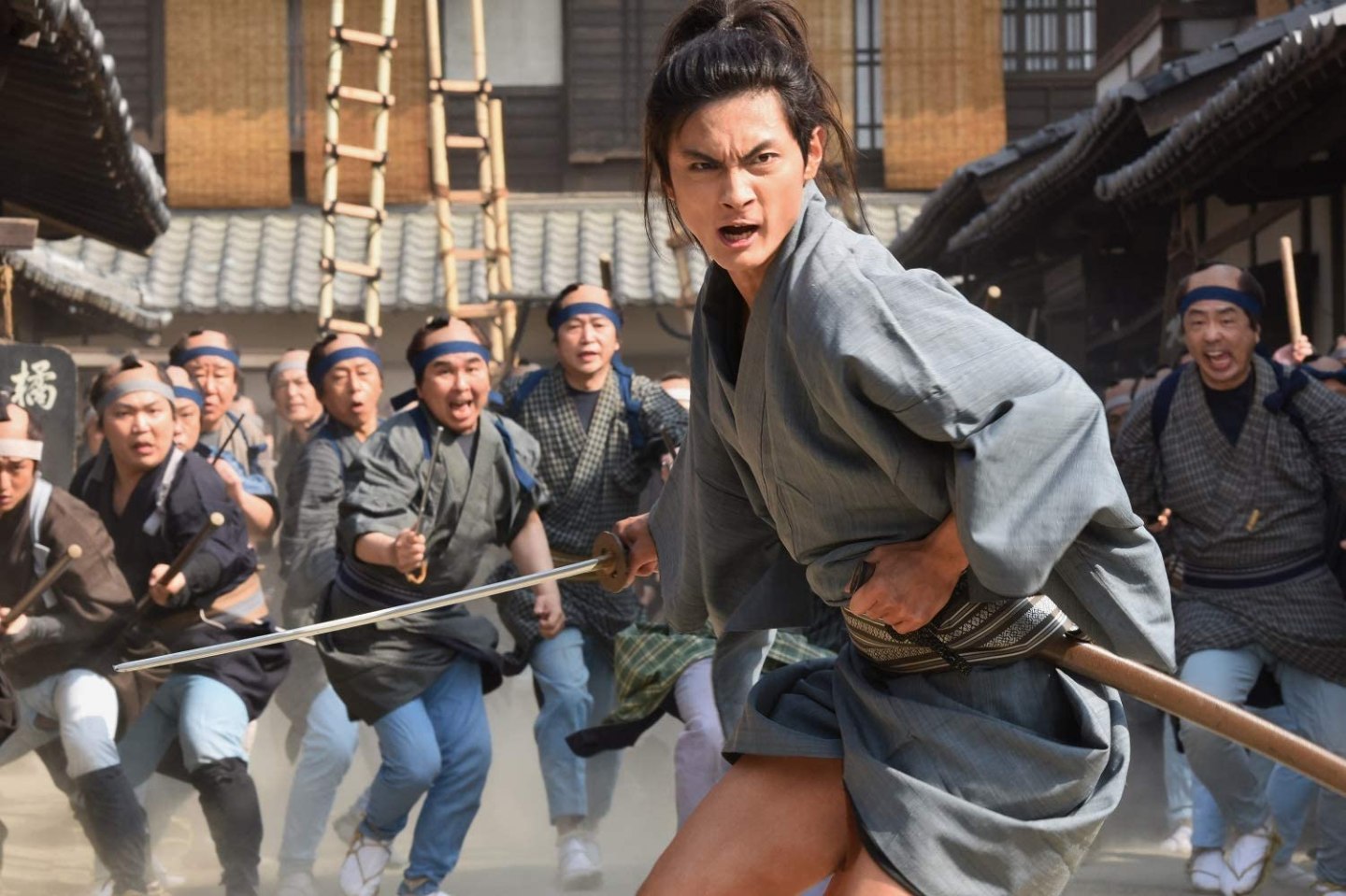 Sadao Nakajima joined Toei in 1959 and worked for the studio throughout its golden age, mostly associated with jidaigeki and gangster movies which were Toei’s stock in trade well into the 1970s and perhaps beyond. Now in his 80s, Nakajima’s last narrative feature was released over 20 years ago. A kind of last hurrah, Love’s Twisting Path (多十郎殉愛記, Tajuro Junai-ki) is a willing throwback to the glory days of chanbara, even bearing a dedication title card to genre giant Daisuke Ito, and doing its best to resurrect the classic Toei programmer magic.

Appropriately enough, the action takes place at a moment of intense change. As the film opens, the men of Choshu who have left their clan to foster their own brand of revolution in opposing the shogunate in favour of the emperor and a desire to reject Western influence, are hiding out in a shack while bad mouthing soon-to-be-allies Satsuma and the man who seeks to unite them, Sakamoto Ryoma. They are soon discovered by Kyoto’s elite Shogunate police, the Mimawarigumi, and ambushed. Their leader, the famed Katsura Kogoro (Masatoshi Nagase), signals that times have indeed changed by pulling out a pistol and defending himself at distance.

Meanwhile, Choshu fugitive in hiding Tajuro (Kengo Kora) is trying to make ends meet with his painting, designing patterns for ladies kimonos but seemingly with little success. He has the sunken cheeks, vacant eyes, and slight slowness of someone who drinks too much and hasn’t had a decent meal in a very long time. We learn that he left Choshu with the others on the pretext of revolution, but his real purpose was escape from a restrictive samurai existence and most pertinently from his miserable poverty. Having long since given up the idea of a being a samurai, he’s already sold his sword and is attempting to live under the radar, unaware that similarly troubled bar hostess Otoyo (Mikako Tabe) has fallen in love with him. Otoyo was adopted by the bar’s owner, Omitsu (Yuriko Mishima), a former geisha, who intended to sell her to a geisha house. She eloped with a man she loved instead, but it turned out that he was minded to sell her too so she came back and now runs the bar while taking care of the ageing Omitsu.

The crisis occurs when men of Choshu arrive in search of Tajuro in the hope that he will rejoin their cause. He doesn’t want to, showing off his samurai skills (and neatly disguising the fact that he has no blade through advanced technique) but pointedly asking for a hefty payment from his former mentor Sanzaemon (Asahi Kurizuka) in belief that it would not be paid. Sanzaemon, however, comes through and leaves a message for Tajuro to meet him behind a nearby shrine. He however spends the entirety of his money getting blind drunk in Otoyo’s bar, during which time Sanzaemon is caught by the Mimawarigumi, breathing his last words to Tajuro’s younger half-brother Kazuma (Ryo Kimura) to the effect that he must reunite with Tajuro and fight for the good of the country.

On the run and holed up with a patient priest and his beloved wife, Tajuro is asked why it is he’s decided to pick up his sword once again despite his reluctance. Asked if was for country or for money Tajuro shakes his head, leaving the priest to correctly guess that it was for love. Tajuro has fallen in love with Otoyo, the only person who either doesn’t believe he is a failed samurai and drunken fool, or doesn’t care. The world however is still too chaotic for romance, and so their pure love will have to wait.

Tajuro’s fate is in many ways the direct result of his attempt reject his responsibility as a samurai, daring to live as a common man with all of the freedoms and burdens that entails. The force which constrains him in both worlds is poverty. Whatever else he is, he is too poor for love, unable to feed himself let alone a wife either as a low wage samurai or a ronin. The price he pays is in his desire to cross borders. The samurai world is not done with him yet and while the denizens of this small backwater worry about paying their rent paying little mind to what’s going on in the capital, political intrigue is not something that he can go on ignoring. After all, not picking a side is in a sense also picking a side. The Mimawarigumi pride themselves on not being as savage as the Shinsengumi (which largely consists of ronin, lower ranked samurai, and commoners whereas the Mimawarigumi are elite samurai and direct retainers to the Shogunate), but their job is still to bring in fugitive rebels like Tajuro and his bid for “freedom” may be doomed to failure in a world still constrained by the law of the samurai.

Follow Windows on Worlds on WordPress.com
Join 342 other followers