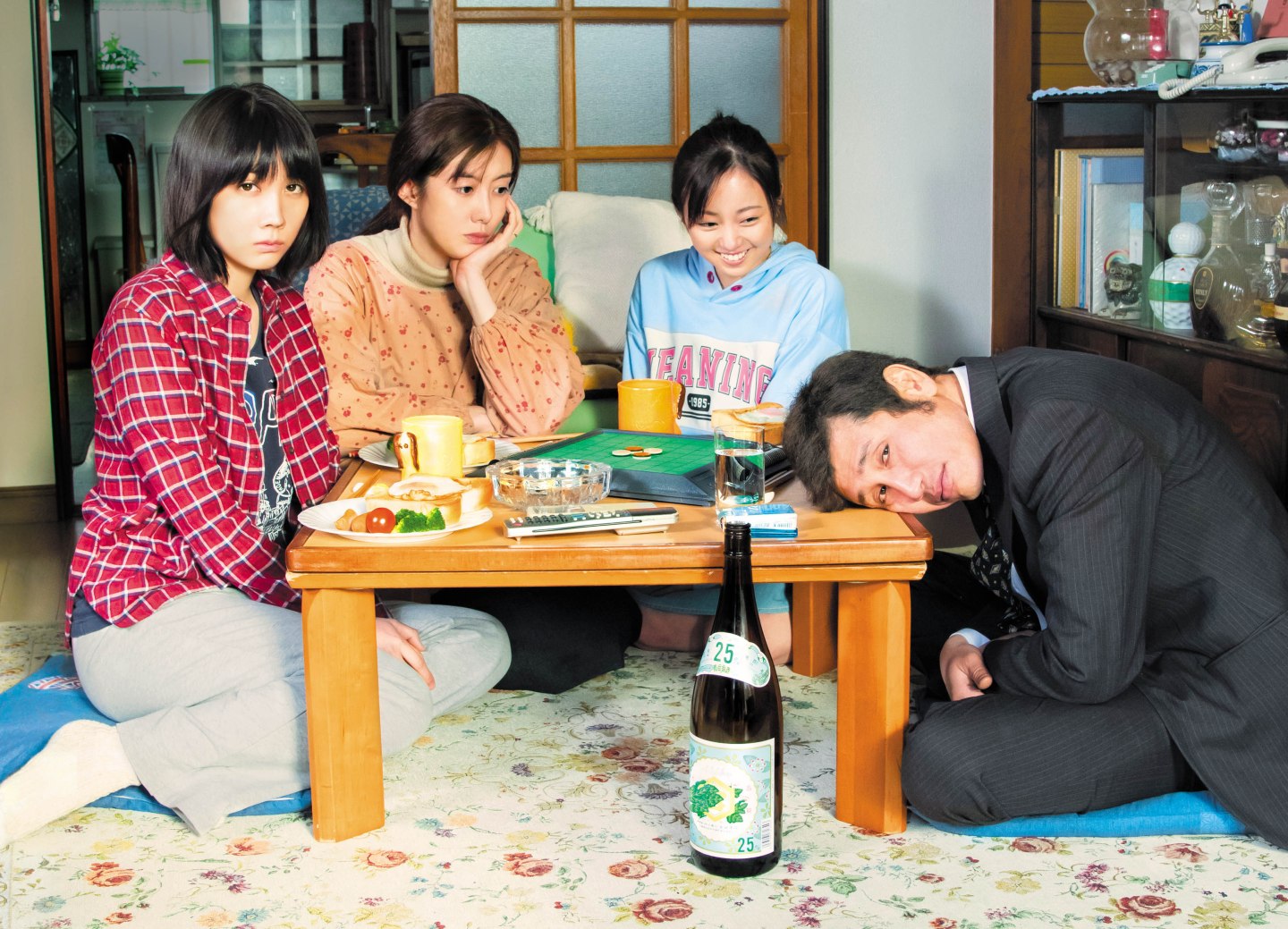 A Life Turned Upside Down: My Dad’s an Alcoholic (酔うと化け物になる父がつらい, Kenji Katagiri, 2019)

Written by Hayley ScanlonPosted on June 15, 2020

A dejected young woman finds herself conflicted in her memories of the father who failed her in Kenji Katagiri’s A Life Turned Upside Down: My Dad’s an Alcoholic (酔うと化け物になる父がつらい, You to Bakemono ni Naru Chichi ga Tsurai). Drawing inspiration from the webcomic by Mariko Kikuchi, Katagiri’s whimsical drama does its best to put a comical spin on the extended trauma of living with an alcoholic dad while laying the blame squarely at the the feet of a society with an entrenched drinking culture in which refusing to imbibe is all but unthinkable.

The heroine, Saki (Honoka Matsumoto), begins her tale in the late ‘90s when she is only eight years old and unaware that her family circumstances are not exactly normal. Tadokoro (Kiyohiko Shibukawa), her salaryman dad, usually rolls in late and collapses in the hall after staying out all night drinking. This is such a common occurrence that Saki and her younger sister Fumi are completely unfazed by it, marking off dad’s drunken days with a big red X on the calendar and cheerfully helping their mum drag him back into the house. Saeko (Rie Tomosaka), their mother, tries to put a brave face on it, and to the girls it probably still seems a little bit funny, but as she gets older Saki begins to see the toll her father’s drinking has taken on her mother not only in practical terms but emotional in realising that he drinks largely as a means of escaping his responsibility which includes that towards his family.

Saki asks her mum why dad’s three friends keep coming round to drink while playing mahjong but the only explanation she can offer is that adults need to socialise. Socialisation does it seems revolve around alcohol, and to that extent perpetuates deeply entrenched patriarchal social codes in largely remaining a homosocial activity with the only women present those that run the bar (the wives of Tadokoro’s friends make a point of thanking Saeko for allowing their husbands to drink at her house, they it seems are not invited). Tadokoro’s excuse for his drinking is that it’s a necessary business activity, that you can’t get by as a salaryman without figuring out how to have fun at a nomikai and bond with your clients over sake. His office best friend later discovers this to be true as a teetotaller given the banishment room treatment he attributes to the fact he doesn’t drink which is why his bosses don’t trust him as member of the team.

Tadokoro might think he’s serving his family through his career, but it’s clear that he neglects them physically and emotionally by refusing to moderate his drinking. He breaks promises to his kids to take them to the pool because he’s still hung over from the night before while his wife finds herself at the end of her tether with his continued indifference later telling the little Saki that she wanted to divorce him even before the kids were born but it’s too late for that now. Saeko escapes from the burden of her life through religion, adhering to a shady Christian-leaning cult which preaches that endurance builds character and character leads to hope, all of which presumably convinces her that she is supposed to just put up with Tadokoro’s problematic behaviour rather than reassuring her that there is no sin in leaving him.

Saki fears making her mother’s mistake, traumatised by her childhood experiences and drawn into an abusive relationship of her own out of loneliness and low self esteem. She resents her father but also feels bad about it, simultaneously thankful when he takes a temporary break from drinking and mahjong but also aware of how sad it is that she is grateful for things that other families would consider normal. Tadokoro proves unable to quit drinking, and Saki wonders if she’s right to even ask him if, as others say, drinking is his mechanism for escaping loneliness, but also reflects on the sadness she now understands in her mother as stemming from her father’s abnegation of his responsibilities and the loneliness it must have provoked in her. Fumi (Yui Imaizumi), trying to explain why Saki should break up with her abusive boyfriend (Shogo Hama), tells her of an experiment she read about in which a rat was trapped in a box and randomly given electric shocks. At first, it tried to escape, but eventually became resigned to its fate and settled for learning to endure the pain. Saki is perhaps much the same, trapped by filiality in finding herself unable to either forgive or reject the memory of the father who so resolutely failed to live up to the name.

A Life Turned Upside Down: My Dad’s an Alcoholic was streamed as part of this year’s online Nippon Connection Film Festival.