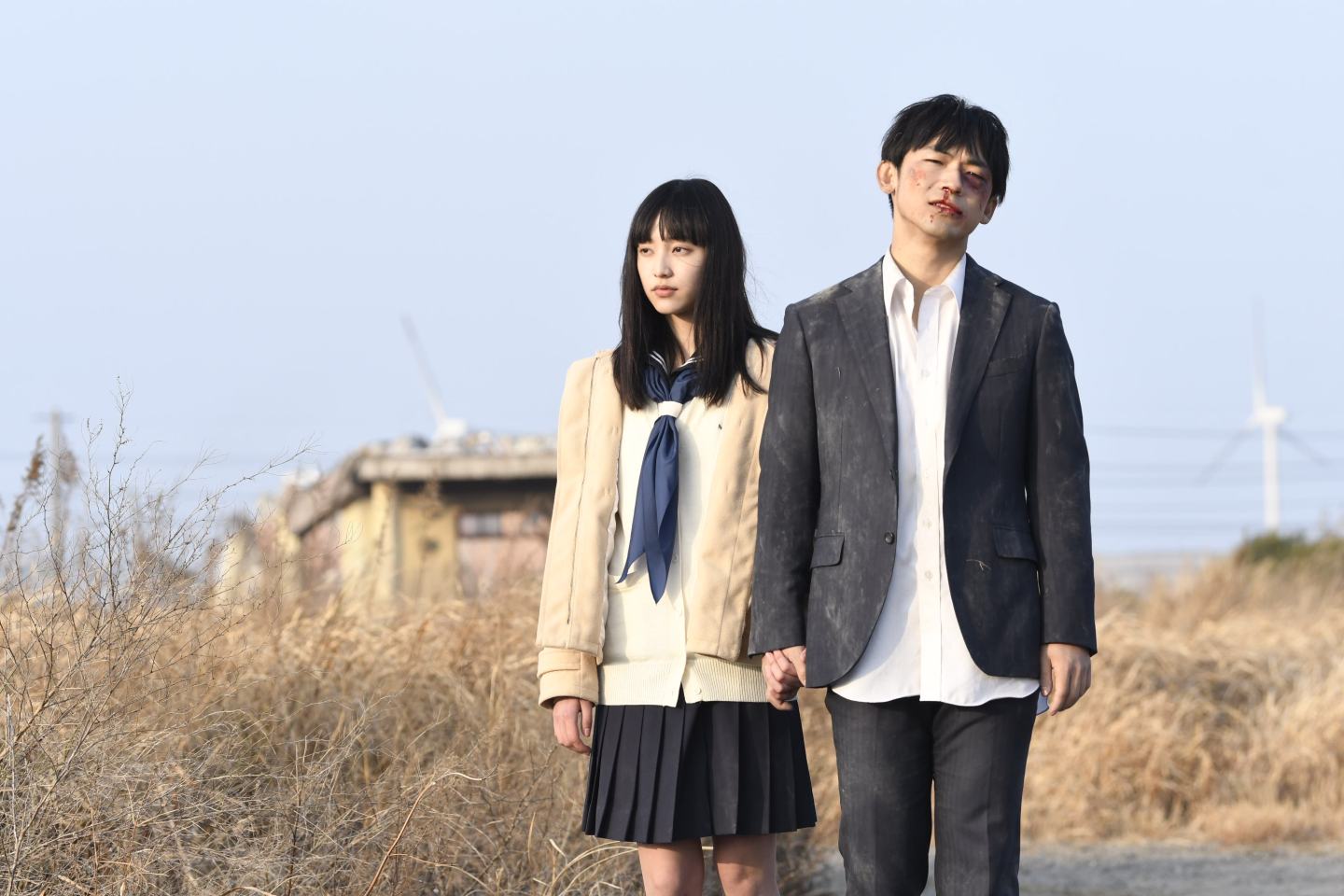 “Don’t any of you have basic empathy for people?” asks a ghost of the living in SABU’s confrontation of the Showa-era legacy and contemporary ennui, Dancing Mary (ダンシング・マリー). As the hero is repeatedly told, there’s a difference between living and being alive and it just might be that the dead are the ones making the most of their time while the rest of us coast along not really paying attention to the things that really matter while life passes us by.

Take Fujimoto (NAOTO), for instance. He became a civil servant because it’s an easy, steady job with an OK salary where you don’t actually have to do anything very taxing. He didn’t get into this because he wanted to improve the lives of citizens, he just wants to do his 9 to 5 and then go home but even then he doesn’t seem to do much other than skateboarding, literally coasting through his life. All that changes when his desk buddy has some kind of breakdown after being put in charge of the demolition of a disused dancehall which is said to be haunted and has already had a similar effect on half the town’s self-proclaimed spiritual mediums. Stories of all powerful ghost “Dancing Mary” are already plaguing the area leaving the civil servants desperate for a solution and considering turning to the most Showa-era of remedies, a yakuza-backed construction firm.

Fujimoto, meanwhile, ends up going in another direction after overhearing a teacher complaining about a Carrie-esque student who can read minds and talk to the dead. Mie (Aina Yamada) has problems of her own, seemingly having no family and mercilessly bullied even while desperately trying to blend in and be “normal”. When Fujimoto finds her she appears to have attempted suicide, but while sitting with her at the hospital he finds himself interrogated by nosy old ladies who demand to know what it is he thinks he’s doing with his life. Where your average auntie might be satisfied to hear a young man making the sensible choice to take a steady government paycheque, these two are having none of it. They accuse him of being a hypocrite, soullessly taking money for nothing while ignoring the needs of citizens. Nothing is chance, they insist, everything is inevitable but by living resolutely in the moment the future can be changed. The old ladies each have terminal cancer and are not expecting to leave the hospital but they’re living their best lives while they can. Everyone has their purpose, what’s yours? they ask, but Fujimoto has no answer for them.

Thanks to Mie, Fujimoto learns that Mary is rooted to the dance hall because she’s waiting for her one true love, Johnny, a missing hillbilly rocker. As the old ladies had tried to tell him, Fujimoto’s problem is that he cannot see the ghosts in the world around him which is as much about choice as it is about ability. Literally taking him by the hand, Mie guides him through a world of abandoned spirits from Edo-era samurai to melancholy post-war suicides but it’s not until he’s rescued from Showa-era thugs by the ghost of a homeless man he himself is partly responsible for that he starts to see the big picture. The dancehall, Mary’s hauntingly romantic relic of a bygone era, is to be torn down to build another soulless shopping and entertainment complex. The homeless man died alone and forgotten after he was moved on from the place he was living so that it could be “redeveloped”. Fujimoto is supposed to be a civil servant, but all he’s ever done is move things on, pass the buck, and refuse his responsibility.

While Mie is encouraged by the two old ladies to embrace her difference, resolving not to allow herself to be bullied hiding in the shadows but to use her powers for good, Fujimoto remains unconvinced, preferring to be “laidback”. His problem is that he’s never taken anything seriously and in that sense has never really been “alive” in the way that Mary and Johnny are “alive” while dead in the enduring quality of their decades-long, unresolved romance. After a few lessons from a pre-war yakuza (Ryo Ishibashi) about the importance of giri/ninjo and a more careful observation of the world around him Fujimoto is awakened to what it is to live, discovering a new purpose and vitality but nonetheless finding it a little inconvenient. “I don’t get life”, he exclaims walking away from dull conventionality towards something more meaningful and finally perhaps alive.