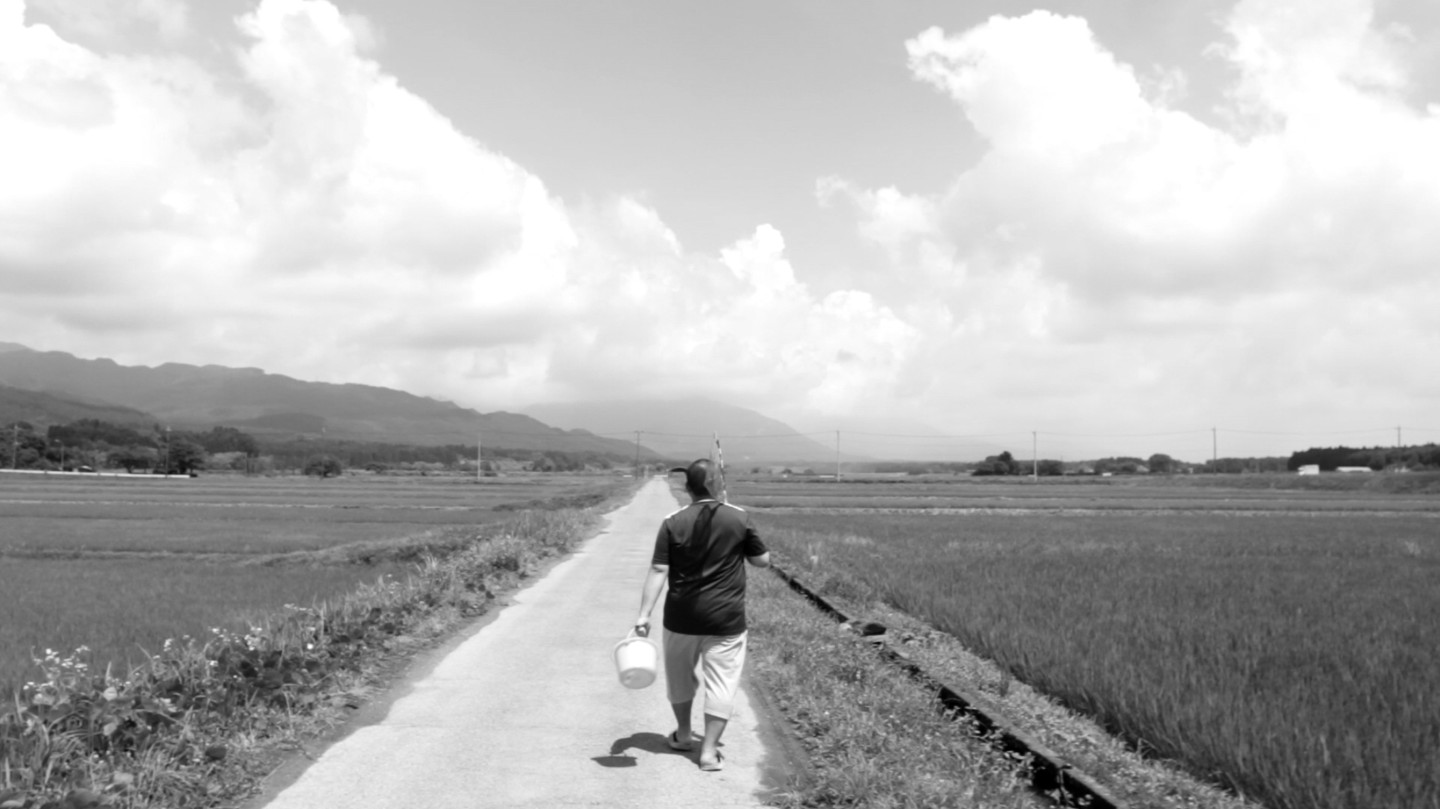 Hirobumi Watanabe goes full 8 1/2 with the decidedly meta comedy, Life Finds a Way (普通は走り出す, Futsu wa Hashiridasu). After the joyful celebration of Party ‘Round the Globe, he returns in a noticeably self-reflective mood once again playing a version of himself as a self-involved, childish blocked filmmaker who fears he is falling out of love with film. Unable to come up with ideas, he fobs off producers and ignores phone calls while hanging out with grandma (Misao Hirayama) and making a nuisance of himself at the library but a mini-nervous breakdown and a reconnection with the film-loving little boy he once was perhaps offer him new direction though the jury’s out on whether “Hirobumi” is ever going to grow up.

Once again locating itself in peaceful Tochigi and shot in crisp black and white with Watanabe’s trademark deadpan static camera, Life Finds a Way opens with Hirobumi fielding a phone call from a producer in which he confesses that he’s supposed to be working on a script created in collaboration with rock band Triple Fire but he’s getting nowhere so he’s hanging out in a cafe to “relax” while playing Dragon Quest. Later he rings his cinematographer, Bang Woohyun, and makes a similar apology, admitting that he’s going to take some time off to watch the World Cup because, after all, it’s a once in every four years opportunity. Meanwhile, he’s mostly snoozing at home with grandma, or driving around with his almost entirely silent and extremely patient strawberry farmer friend Kurosaki (Kurosaki Takanori).

One of his early rants offered as a monologue to Kurosaki who seems to be used to them, revolves around his sense of inferiority as a creative unfairly maligned as a lazy good-for-nothing by workaholic Japanese society. In Japan, he says, we worship the worker ant who survives because he works away earnestly, while in France they honour the grasshopper because his beautiful music can cheer you up even in the depths of winter. Hirobumi thinks the French have it right, that Japanese people are too obsessed with doing everything “properly”, always worrying about trivial things. According to him, there are far too many worker ant types in the Japanese film industry. He thinks films should be free and unconstrained, not bound by some kind of ideal.

In any case, while being quite rude to “worker ant” Kurosaki who labours all day long on his strawberry farm, Hirobumi blames all his problems on having been unlucky enough to have been born in Japan rather than somewhere like France where they appreciate people like him. Later, he interviews a few locals and asks them what they think is the problem with the Japanese film industry, only for Kurosaki to repeatedly answer “it’s Hirobumi”, perhaps getting his own back. In fact, Kurosaki, apparently meaning well, shows Hirobumi a piece about of one of his films in a glossy magazine only it’s uncomplimentary in the extreme which sends him into a rage, ranting furiously about ungrateful audiences and how much he hates film critics. Hirobumi seemingly blames everyone but himself for his faults and failures, climbing all the way up to a hilltop shrine to pray that he wins the Palme d’Or while also asking that the gods not give good jobs to successful directors but give them all to him instead, and for bad things to happen to someone who sent him a strongly worded letter.

Hirobumi’s “fan mail” appears to be from a stuffy old woman who states that she has “kindly” written to him several times already to explain that his work is an insult to cinema yet he keeps “selfishly” making films. She’d liked to have told him this in person, but was apparently “too busy” so has written another letter urging him to reflect on his life choices and either make “good” films like Koreeda and Miyazaki, or find himself another career. Hirobumi wonders what the point of films is if they don’t make people happy or have the capacity to change the world. Asked what films meant to them most of his interview subjects either had no answer or regarded them only as entertainment. An encounter with himself perhaps reminds him what it was he saw in cinema and allows hims him to begin moving forward creatively.

But even having finished his script, has Hirobumi really changed? He seems permanently to be surrounded by children, hanging out reading the manga in the kids’ section of the library, lining up behind a string of obedient primary school students to check out his DVDs where he sets a bad example by having a series of Tora-san movies already overdue but using grandma’s card to take out more, and hanging out with his niece catching crayfish in the local stream with a bucket and net just like he must have done since he was little. He lies about missing the World Cup, ignores phone calls from the library to snooze while spending time with grandma, and is not really any nicer to the patient Kurosaki than he was before. But life finds its way, Hirobumi escapes his creative malaise by rediscovering the joy of cinema, healing himself body and soul, and feeling more positive about the future even if nothing has really changed.

Life Finds a Way is available to stream worldwide until July 4 as part of this year’s Udine Far East Film Festival. It was also scheduled to screen as part of the 10th season of Asian Pop-Up Cinema.