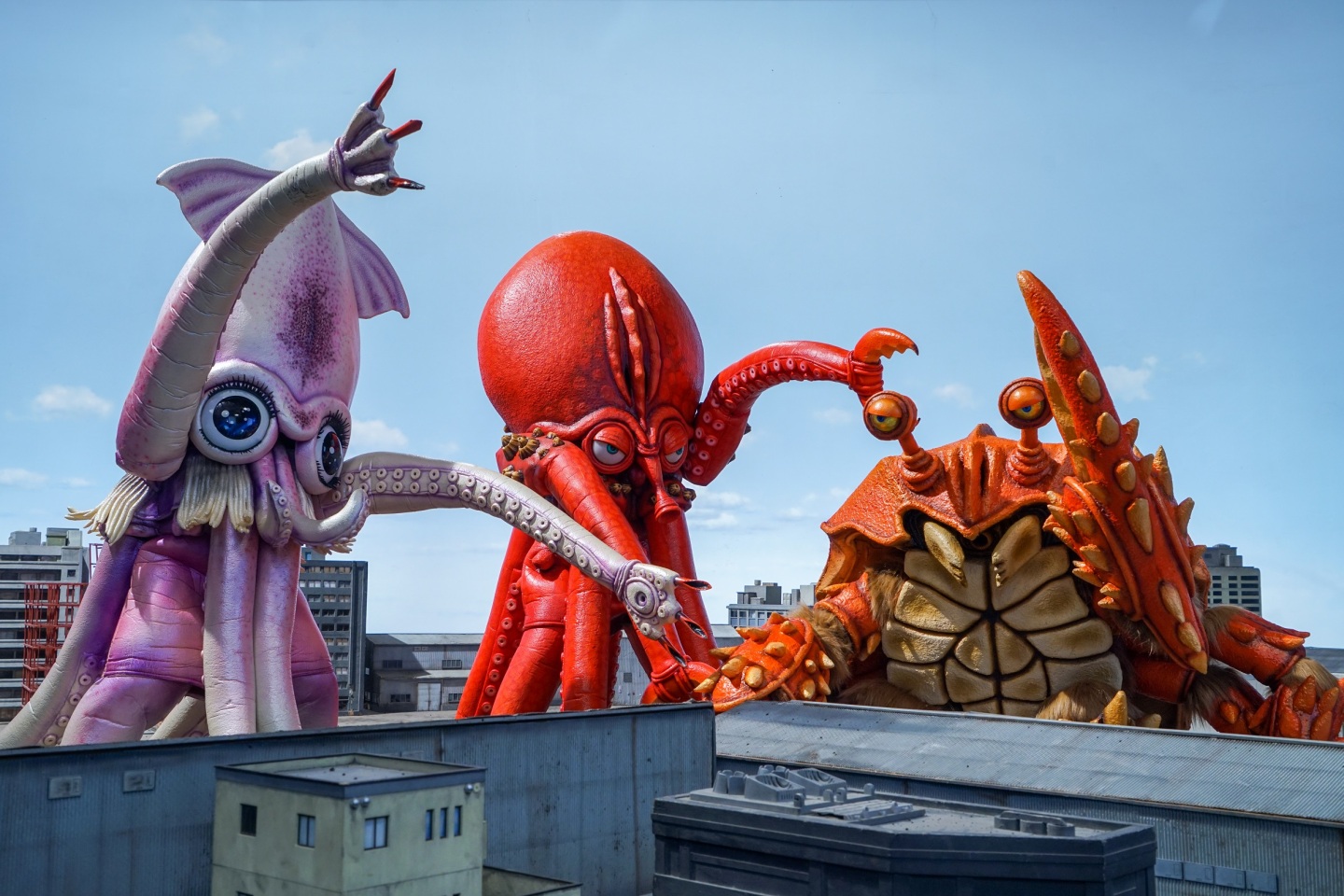 Ever wondered what happens to a fallen kaiju? After Godzilla and friends have ransacked the city, there’s certainly a lot of cleaning up to do but disposing of kaiju corpses isn’t something your average monster movie gives a lot of thought to. According to Monster SeaFood Wars (三大怪獣グルメ, San Daikaiju Gourmet), there’s surprisingly good eating to be had in monster meat and when it comes to taking down a giant squid, perhaps it’s better to ask a chef rather than a scientist or the boffins from the Ministry of Defence.

Switching between documentary sequences featuring talking heads looking back on the bizarre events and the events themselves, Monster SeaFood Wars follows scientist/sushi shop heir Yuta (Keisuke Ueda) who accidentally unleashes three giant kaiju on the city of Tokyo after he’s knocked off his bike while delivering some prize seafood to the local temple as an offering. In addition to being the heir to a sushi shop, Yuta is also a scientist apparently obsessed with giant monsters which he describes as “cute” and had been working on a serum, Setap Z, to turn ordinary foodstuffs giant in order to end world hunger. Before you know it, angry octopus Takolla and his frenemy Ikalla are on the rampage through the city.

Of course, Yuta is the prime suspect which is perhaps why he somewhat arrogantly describes himself as the “biggest victim” while reluctantly agreeing to help out SMAT, Seafood Monster Attack Team, as they try to figure out how to mitigate the effect of Setap Z and stop the kaiju assault but is further irritated by being denied a spot on the team as a full member. Meanwhile, he’s also facing off against rival scientist Hikoma (Yuya Asato) who impresses with an obvious idea, vinegar, while charming Yuta’s childhood friend and unrequited crush Nana (Ayano Christie Yoshida) who now works for the Ministry of Defence and has only contempt for the weirdo monster geek.

Yuta’s plan had been to let Takolla and Ikalla duke it out, assuming Takolla would win and then they’d somehow lure him into a giant octopus trap. Hikoma meanwhile suggests giant rice vinegar cannons, regular missiles already having proved ineffective against the sea creatures’ springy flesh. Hikoma’s plan would have worked, had it not been for the sudden and unexpected return of Kanilla whose hard shell protects him against the corrosive effects of the vinegar. During the fight, however, some of Takolla’s tentacles are chopped off, chunks of meaty white flesh falling to the ground as SMAT commander Hibiki (Ryo Kinomoto) unconsciously licks his lips.

While very much a classic kaiju movie, Monster SeaFood Wars has its tongue firmly in its cheek, scaling back on the monster-fighting action for some gentle satire as the gang find they just can’t resist the urge find out what kaiju tastes like. The answer is surprisingly good, with the effect that kaiju meat becomes the latest culinary trend. “Forget bubble tea” one commentator says, monstrous squid is where it’s at. The TV news also comes in for a kicking with its placard unveiling confirming the kaiju’s name as well as a state of the nation address from an Abe-esque PM using the crisis to further his quest to “take back Japan” while speaking in a distinctly squeaky voice.

Meanwhile, drunk salarymen complain about their exploitative working conditions, joking that they’d need to be eight-armed octopuses to get through the amount of work expected of them only for Takolla to appear out of nowhere and slap them down seconds after they’ve made a few inappropriate remarks to some passing young ladies. Aside from the kaiju, the big bad does seem to be pervasive sexism with Ministry of Defence employee Nana often relegated to little more than eye candy and eventually the subject of an offensive bet between the icy Yuta and slick Hikoma whose equally sexist cheesy lines actually seem to impress her.

Yuta, however, gets the chance to redeem himself by revealing that the really did make the formula to help starving people in Africa rather than just because he actively wanted to usher in the great kaiju apocalypse, owning his legacy as the son of a sushi shop while his best friend Niima (Shojiro Yokoi) has a few surprises of his own up his sleeve which prove that the best person to have at a giant octopus is a skilled chef. Of course Setap Z turns out to cause a few additional problems, accidentally spreading itself around after hitting the mosquito population, while it seems the villain is not quite done with their desire to misuse the serum, hinting at a possible sequel. A humorous but never mocking take on the classic tokusatsu, Monster SeaFood Wars pits culinary science against the giant monster threat and discovers that all you need to save the world is a good cook.