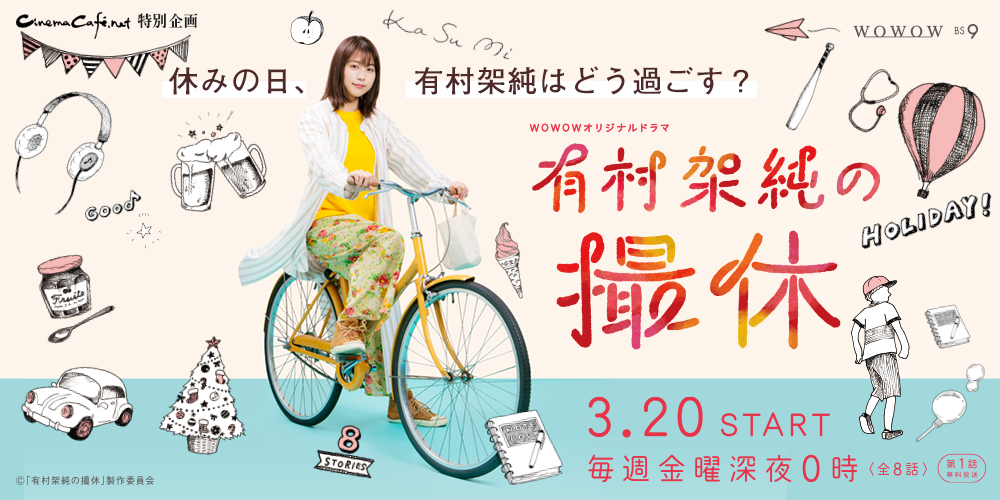 As has sadly become all too clear recently, the Japanese entertainment industry can be a brutal place rife with exploitation in which performers are often expected to push themselves well beyond the limit or risk offending their agencies and thereby disrupting their careers. That is perhaps why a “day off” for a headline actress seems like a concept incongruous enough to spawn an eight-part, late night TV drama aired on premium channel WOWWOW. Often around half an hour in length (though this one is a little longer), drama series running after midnight have the freedom to embrace darker themes and can sometimes be risqué, but more often than not cater to those looking for easy comfort watching often revolving around food and/or local culture such as in the phenomenally popular Midnight Diner which was later picked up by Netflix, or the much loved Solitary Gourmet.

The chief draw for international viewers, however, is that the first and third episodes of A Day Off of Kasumi Arimura (有村架純の撮休 第1話, Arimura Kasumi no Satsukyu) are directed by Hirokazu Koreeda, with Rikiya Imaizumi (Their Distance; Little Nights, Little Love) and Santa Yamagishi also doing double duty, while Satoko Yokohama (Bare Essence of Life, The Actor) and Megumi Tsuno (Ten Years Japan “Data”) fill the remaining slots. Each of the eight self-contained stories features lead actress Kasumi Arimura (Sekigahara, Narratage, Flying Colors) playing a fictionalised version of herself enjoying a surprise “day off” when, for one reason or another, shooting is cancelled at short notice. In the first episode under review here penned by Sakura Higa, Kasumi is currently filming a TV drama playing a top prosecutor but is given the day off after a member of the creative team calls in sick with flu. As a producer points out, flu isn’t the sort of thing that would have held up filming in the old days but what can you do?

Accordingly, Kasumi decides to take a bullet train to her hometown in southern Japan to visit her mother, Yumiko (Jun Fubuki). Having not returned for New Year, Kasumi is perhaps slightly put out to realise that her mother seems to lead a very active life and though she is obviously happy to see her it’s clear that she doesn’t just sit around wishing her daughter would call. On their way home from the station, Yumiko takes Kasumi by the supermarket to pick up supplies for a home cooked dinner where she shows her off to the cashier with whom she seems to be on extremely friendly terms. Kasumi smells romance in air, and even if a little surprised is not unsupportive but unwittingly puts her foot in it by bringing up the fact that Mr. Onishi (Akio Kaneda) is divorced and has a son from his previous marriage.

It’s not Mr. Onishi that Kasumi ends up worrying about, however, so much as a mysterious young man, Makoto (Shinnosuke Mitsushima), who calls in to see her mother. While Yumiko has her signing autographs for all her friends and posters of her hit movies Flying Colors and Cafe Funiculi Funicula standing in the living room, Kasumi can’t help but feel put out having come all this way only to see her mum much more interested in this random man even if she seems to have come more out of duty than of love, disappointing Yumiko by declaring she won’t be staying overnight but heading back to Tokyo to go over her lines. Out of jealousy and a slight awkwardness, she worries as to what Makoto’s true motives are, especially after hearing her mother hint that she’s been giving him money, though it’s perhaps also true enough that she is simply grateful to have someone close by to help out with small but irritating tasks like changing the chain on a bicycle or getting rid of unneeded appliances. What Kasumi realises, however, is that her mother is harbouring a sense of guilt that relates to their perhaps atypical family history, something which she herself is forced to process through her surprise journey home which finds another echo in her relationship with her sickly, or not as it turns out, colleague.

More or less a three hander, the episode is like much of Koreeda’s work replete with the detail of everyday life and the slight awkwardness of familial reunion. On stepping into her childhood home, Kasumi is chided by her mother for behaving like a guest, signalling that she no longer views herself as someone who belongs there or has the right to simply walk in. Kasumi never gets round to talking to her mother about whatever it was she might have wanted to talk about, but through their encounter with Makoto the two women begin to repair their relationship, meditating on the things which have changed while they were apart and those which haven’t. A beautifully gentle tale of familial reconnection, Kasumi Arimura’s first day off is another slice heartwarming drama from the empathetic director in which an actress takes the day to play herself and learns to make peace with the past by accepting the present.

A Day-Off of Kasumi Arimura Ep. 1 streams in the UK 10th October 1pm to 1pm 13th October as part of this year’s BFI London Film Festival.