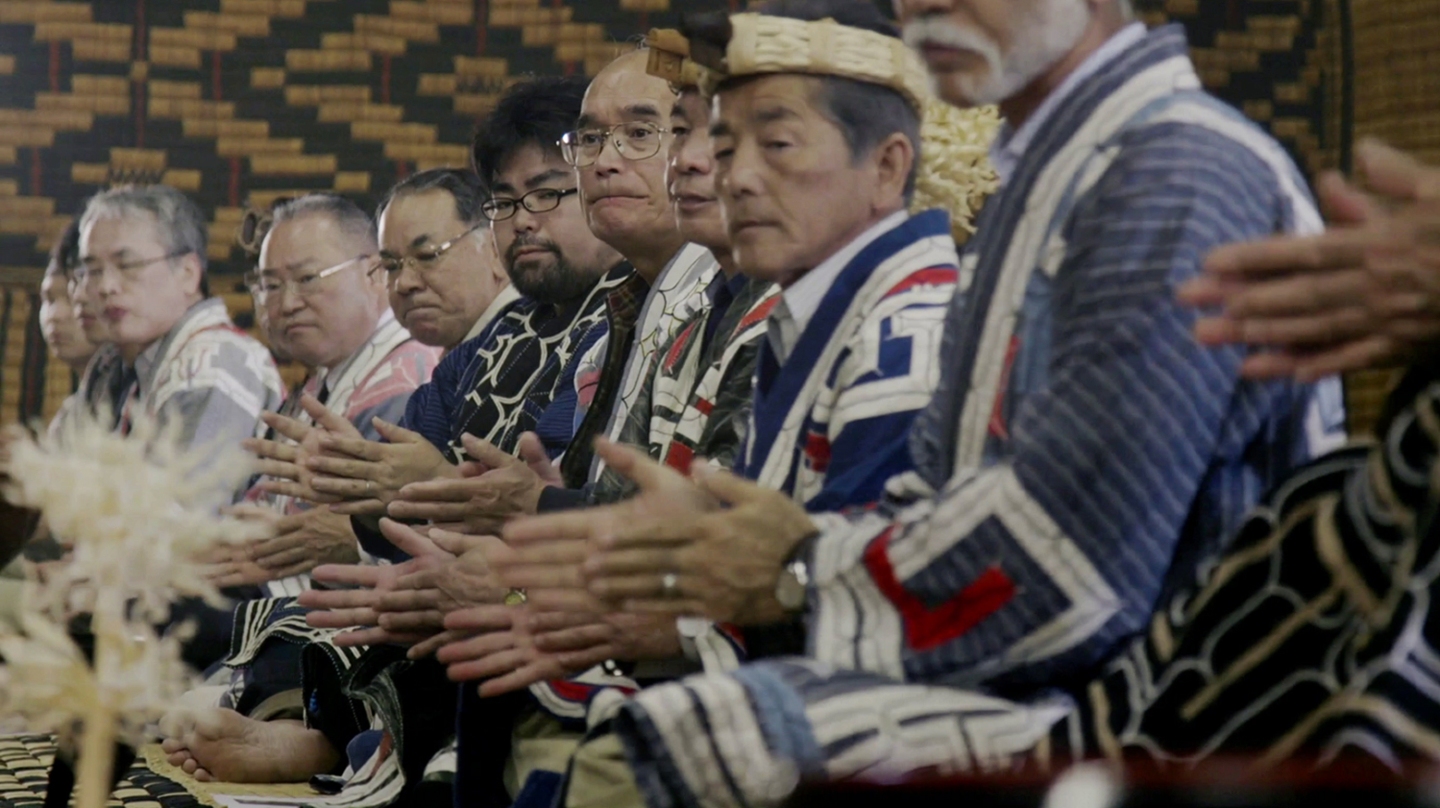 Japanese society often presents itself as homogenous claiming a harmony born of a universal culture to which all subscribe, but in reality has sometimes sought to exclude or assimilate those it regards as different such as the still continuing prejudice against the burakumin underclass and towards the indigenous people of Hokkaido, the Ainu, who were only officially recognised by the Japanese government in 2008. Laura Liverani & Neo Sora’s documentary Ainu Neno An Ainu (アイヌネノアンアイヌ, lit. humanlike human) explores the realities of what it means to be Ainu in contemporary Japan as the community strives to recover and preserve its traditional culture in the face of increasing modernity.

Japan annexed Hokkaido during the Meiji era largely through settler colonialism, later determining to “develop” the island which entailed confiscating Ainu lands along with banning their language and traditional practices such as tattooing in an act of forced assimilation. Many of the participants in the documentary have the same name but this is not necessarily because they are related as one explains, the entire town was in fact given the same surname inspired by the name of their settlement translated into Japanese when assimilated as Japanese citizens. While some aspects of traditional culture survived, many of the older residents lament that their parents preferred not to teach them the Ainu language in fear of social discrimination, something which is repeatedly cited by many as a reason some prefer not to disclose their Ainu identity after leaving for the cities.

Nevertheless, some younger people are eagerly attempting to reclaim and preserve the Ainu language which is entirely oral and has no writing system. The main protagonist of the documentary, Maya, opens the film by teaching a traditional lullaby to a class of students later revealing that her father Kenji, who was not born Ainu, taught himself the language and has become passionate about passing it on. Language classes can also be heard on local radio while remnants of Ainu words pepper the local dialect even if many may not realise. Meanwhile, others relearn ancient lullabies not directly from their mothers but from archival tapes.

Maya’s mother is also part of a stage performance showcasing traditional Ainu music for tourists from outside of the community, a Korean translator interpreting for a rapt audience each clutching pamphlets as they listen. A young man, Hibiki, who works for the Ainu museum admits that some feel ambivalent about the way they’ve chosen to commodify their culture in order to preserve it while others feel it’s a price worth paying in order to ensure that something at least survives. Some customs are perhaps harder to justify in the modern society such as the Iomante bear sacrifice which no longer takes place after successful campaigns by animal rights organisations.

While some speak of divisions within the Ainu communities, others praise the local traditions of acceptance and hospitality in which it is normal to offer food, gifts, and shelter to others without expectation. Many who were not born Ainu have been accepted into the community, the Takanos for example who arrived from Tokyo in the 1960s and now run a store selling the Ainu handicrafts they have spent a lifetime learning, or Magi a transgender woman from Okinawa finding family and a place to belong among the Ainu.

It is not in any case an either or situation, the local children cheerfully singing the theme from My Neighbour Totoro as they supervise the harvest as well as a Japanese folk song before they leave school for the day while at the end of the film introducing themselves in the Ainu language for a local radio host. Intended as a “family photo album” of the local community, an image which opens the film and recurs throughout in static captures of the various protagonists posed for a portrait, Ainu Neno An Ainu examines what it means to be a member of the Ainu community in the present society and uncovers with it a tremendous warmth and openness not only among the extended families as its centre but towards the wider society in the hope of preserving their culture through sharing it as widely as possible with all who wish to learn.

Ainu Neno An Ainu streamed as part of this year’s Nippon Connection.

The photo project which sparked the documentary