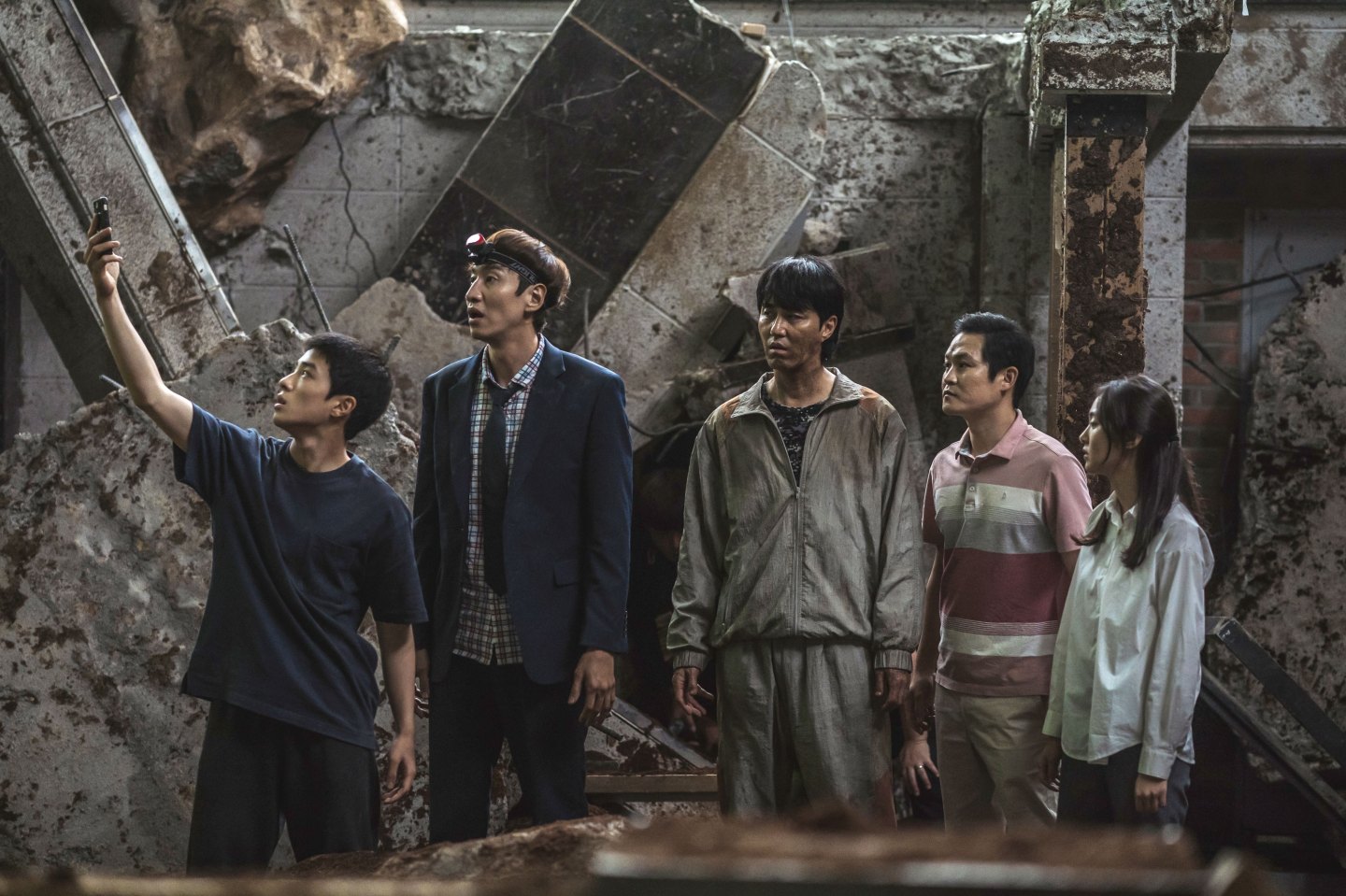 Financial security is built on shaky ground in Kim Ji-hoon’s harrowing disaster dramedy Sinkhole (싱크홀) in which one man’s home-owning triumph quite literally crumbles beneath his feet. The latest in a recent series of movies lamenting the sometimes lax safety culture of the Korean construction industry, Sinkhole is also a crushing indictment of a society ruled by house prices in which social status is largely defined by the owning of property while the young in particular struggle to climb out of a deep well of societal despair.

As the film opens, the Park family is about to move in to their new flat, the first they’ve ever owned albeit with a frighteningly large mortgage, in the middle of a seasonal downpour. Only when they arrive, they discover the movers haven’t even started unloading because their apparently irresponsible neighbour Man-su (Cha Seung-won) has inconsiderately parked his car in front of the entrance and isn’t answering his phone. Patriarch Dong-won (Kim Sung-kyun) ends up in an awkward confrontation with the abrasive apartment dweller which is inconvenient because Man-su apparently works in just about every business in the area which means he continues to run into him just about everywhere he goes.

Anyway, that’s the the least of his problems because, having made this giant investment, Dong-won can’t help thinking there’s something wrong with his new dream home especially when his adorably polite young son Su-chan points out that his marbles roll across the floor of their own accord. Worried they may have a subsidence problem, Dong-won checks his windows open properly and records evidence of ominous cracks in the pavement outside but struggles to get the other residents to agree to maintenance checks in fear that not getting the answer they want will bring down the value of their property.

Property prices are apparently everything. Homeownership is an unobtainable dream for many, yet Dong-won already feels insecure in his purchase especially as his colleagues seem relatively unimpressed by the fact his flat is in a recently gentrified area and comparatively modest. Bamboozled into hosting a housewarming, he’s mildly embarrassed to realise the view from his balcony is of nicer, much more expensive luxury flats just across the river which are likely to remain far out of his reach. Nevertheless, his colleague, Seung-hyun (Lee Kwang-soo) declares himself jealous in part because he’s still renting a studio flat and feels that dating let alone marriage is impossible without being in a position to get a multi-room apartment. His colleague Eun-ju (Kim Hye-jun) is in the same predicament but prefers to see it as simply being at a certain stage on the ladder.

This dream of future security is however quite literally built on shaky ground. There are definitely problems with Dong-won’s new apartment which become increasingly severe from the tilting floors to cracked glass and interruptions with the water supply presumably caused by cost-cutting and shoddy construction practices. When the building collapses into a sinkhole, Dong-won is trapped inside with work colleagues Seung-hyun and Eun-ju along with Man-su and his teenage son Seung-tae (Nam Da-reum). Despite the inherent horror of the situation, Kim keeps the atmosphere light as the small band of survivors attempts to manage as best they can, finding an awkward solidarity while trying to attract the attention of the emergency services and eventually making a daring escape using whatever tools are available to them.

Even so, as much as the small band of almost strangers bond thanks to their desperate circumstances, there is an uncomfortable conservatism at play especially in the film’s treatment of a working class single mother and her son living in an apartment on the floor below Dong-won’s. That aside, Sinkhole offers a fierce criticism of an increasingly consumerist society in which house prices are all anyone talks about and homeownership is the only badge of social success. 11 years of patient sacrifice is swallowed in an instant, sucked into an abyss of corporate malfeasance, while Dong-won is left to climb out of the hole he’s in on his own. It’s small wonder that some of the survivors decide to drop out of the system altogether, ditching the idea of rooted homeownership for nomadic freedom in buying a small caravan rather than participate in the property market or climb the corporate ladder. “Don’t be happy in 10 years, be happy today!” they enthusiastically chant. The entire society is, it seems, sitting on a sinkhole which might give any minute, what’s the point in investing in a future which could disappear from beneath your feet without reason or warning?