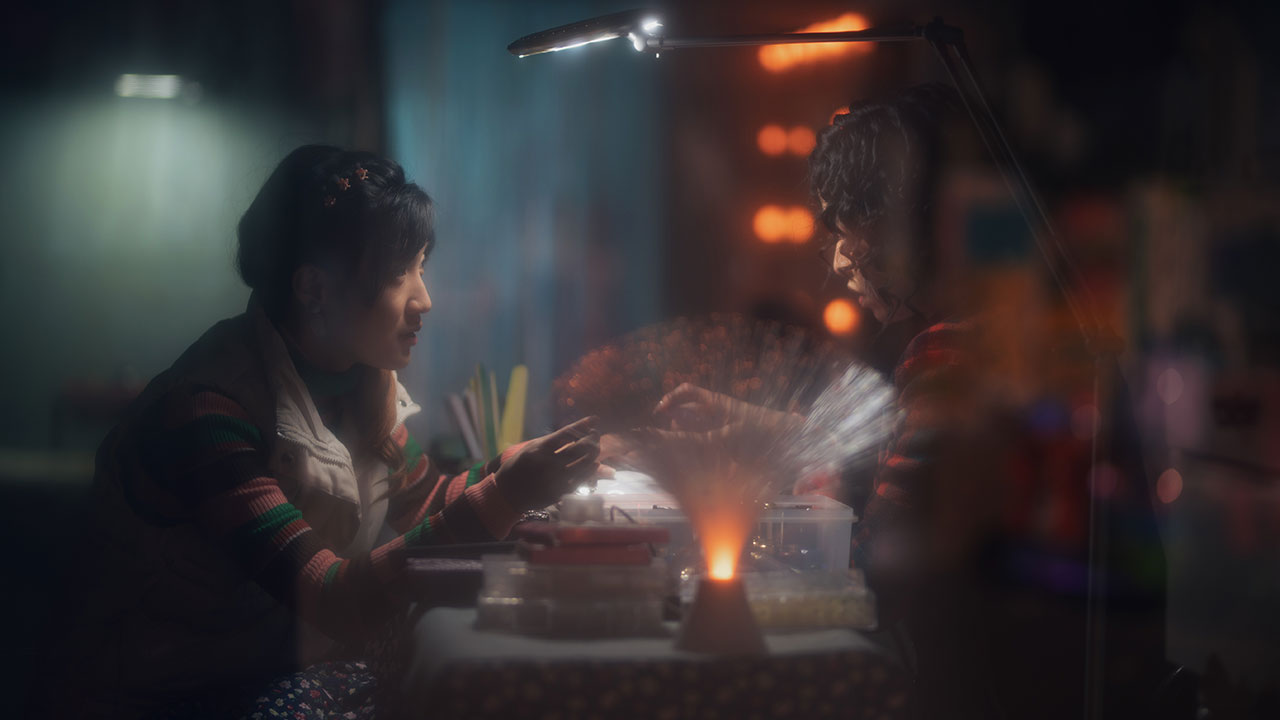 “I had to let it happen, I had to change” the rather incongruous voice of Madonna insists, finding a note of defiance on reaching the climactic “so I chose freedom” as the movie version of Don’t Cry for Me Argentina erupts over the closing minutes of Wei Shujun’s Ripples of Life (永安镇故事集, Yǒng’ān Zhèn Gùshi Jí). Like much of the film, the use of the song is ironic but still somehow poignant its repurposing perfectly expressing the interior lives of each our “characters” who are all in some way or another looking for escape or at least a way out of personal dissatisfaction while trying to film a movie about the inertia of life in a small town in rural China where nothing ever happens.

Divided into three segments, Wei’s film is as much about the positioning of rural China as it is about “cinema”. A Beijing film crew descend on this provincial small town with their own preconceived notions of rural life, determined not to “romanticise” country living but nevertheless bending it to their will looking only for signifiers that align with their mental image of the hinterlands of their nation. Only latterly do they realise that for true authenticity the film should be in Hunanese, but none of them speak it which is a significant stumbling block in their efforts to overcome ongoing creative differences over the script.

Wei is, in part, satirising the recent trend in Chinese indie cinema for gritty stories of rural poverty usually filmed with depressing naturalism determined to stress the harshness of life outside of the cities amid the nation’s ever increasing wealth divide. The first chapter in part does this too, later shifting away from early Jia Zhangke towards the neon yearning of Wong Kar-wai but always undercut with a sense of meta irony not least in its choice of heroine. The infinitely cornered Gu (Huang Miyi) longs for “a different life”, trapped in an unsatisfying marriage to a gruff man she accuses of working night shifts to get away from their toddler daughter whom she is forced to take to work with her while he constantly undermines all her parenting decisions based on articles sent by his mother. A woman at the market coos over the baby and asks when the next one’s due, Gu crestfallen realising she’s trapped in this small-town existence where nothing ever happens. But then the film crew begin to notice her, telling her she has a “real cinema face” and likening her to Kim Min-hee of whom she has never heard. Their admiration is again ironic, considering they were looking for the authentic face of rural China but taken with this cinematic vision, yet it’s also callous and cruel. They give her false hope, allowing her to dream as she puts on makeup and models costumes only to be forgotten once again when the “real” actress arrives, cast back into a life of quiet desperation.

Perhaps this too is another unfair stereotype assuming that everyone from a small town longs for escape, but Gu’s story does indeed mimic the earlier parts of the screenplay for the film within the film which the director sees as a tale of a small-town woman’s awakening to independence and agency while the screenwriter Chunlei (Kang Chunlei) opts for an old-fashioned take on consumerist corruption. Shifting away from Gu towards formerly successful actress Chen Chen (Yang Zishan), the second arc pulls towards Chunlei as Chen Chen searches for escape from a rut in her career apparently having left her commercial agent to do more earnest work but doing not much of anything for the previous year. In another meta touch, she is from this rural backwater and like her character in the film chose to leave but now admits that sometimes she misses life in the country. As someone else puts it, city folk all want a return to simple rural life but can’t accept the reality of it which is why the plan to rejuvenate the area largely relies on tourism including the building of a waxwork museum of which Chen Chen is expected to be a notable inclusion as a local girl made good.

Chen Chen’s image has once again been commodified, stripping her of power or agency over her name and face but on returning to Yong’an she is forced to realise that she is no longer of there, this place where nothing ever happens has already changed while she exists on a slightly different plane. Realising the maid covering her room is a childhood friend she cheerfully tries to reconnect but the woman is awkward and evasive, embarrassed perhaps to acknowledge that she is a mere hotel employee while Chen Chen has achieved her dreams of stardom. Attempts to reconnect with two other male friends similarly backfire, the first a typical provincial bureaucrat who uses her for official business without her consent while a meal with the other’s family proves even less joyful as she endures countless barbed comments from his snippy wife who eventually tries something similar in asking her to find a job for her son on the film. As she’s leaving he asks her the same question the screenwriter obsessed over, suggesting that she left for mercenary reasons only for her to answer that she didn’t want to live like his wife, or indeed like Gu, but wanted “a different life”.

This battle between image and authenticity lies at the heart of the conflict between the director, a hipsterish festival darling with a sideline in hip hop, and the schlubby screenwriter himself perhaps trapped in the previous generation of Chinese filmmaking but also in his way more idealistic believing in cinema as an art form which can move the world rather than mere entertainment created for commercial gain. He accuses the director of hypocrisy, exploiting the arthouse aesthetic for critical credibility and with it a vision of rural China, while the director criticises him for his old-fashioned mentality in seeking melodrama over message. Shot in cooling blues their heated arguments are noticeably dispassionate, Wei even descending into some ironic iconography which sees the pair talking through their issues with a wise man film critic on a boat on a misty river. The ironic conclusion brings the whole affair full circle as the words of Madonna as Eva Peron come to speak for each of the protagonists, Gu now angrier, impatient as she shifts dishes while her husband idles nearby, and Chen Chen forced to pose next to a wax figure of herself during a launch ceremony for this film in which the script has yet to be “finalised”. “But nothing impressed me at all” the song continues, “I never expected it to” hinting at the contradictions of the modern China in the internalised defeatism of small-town dreams and the cynical filmmakers who exploit them.