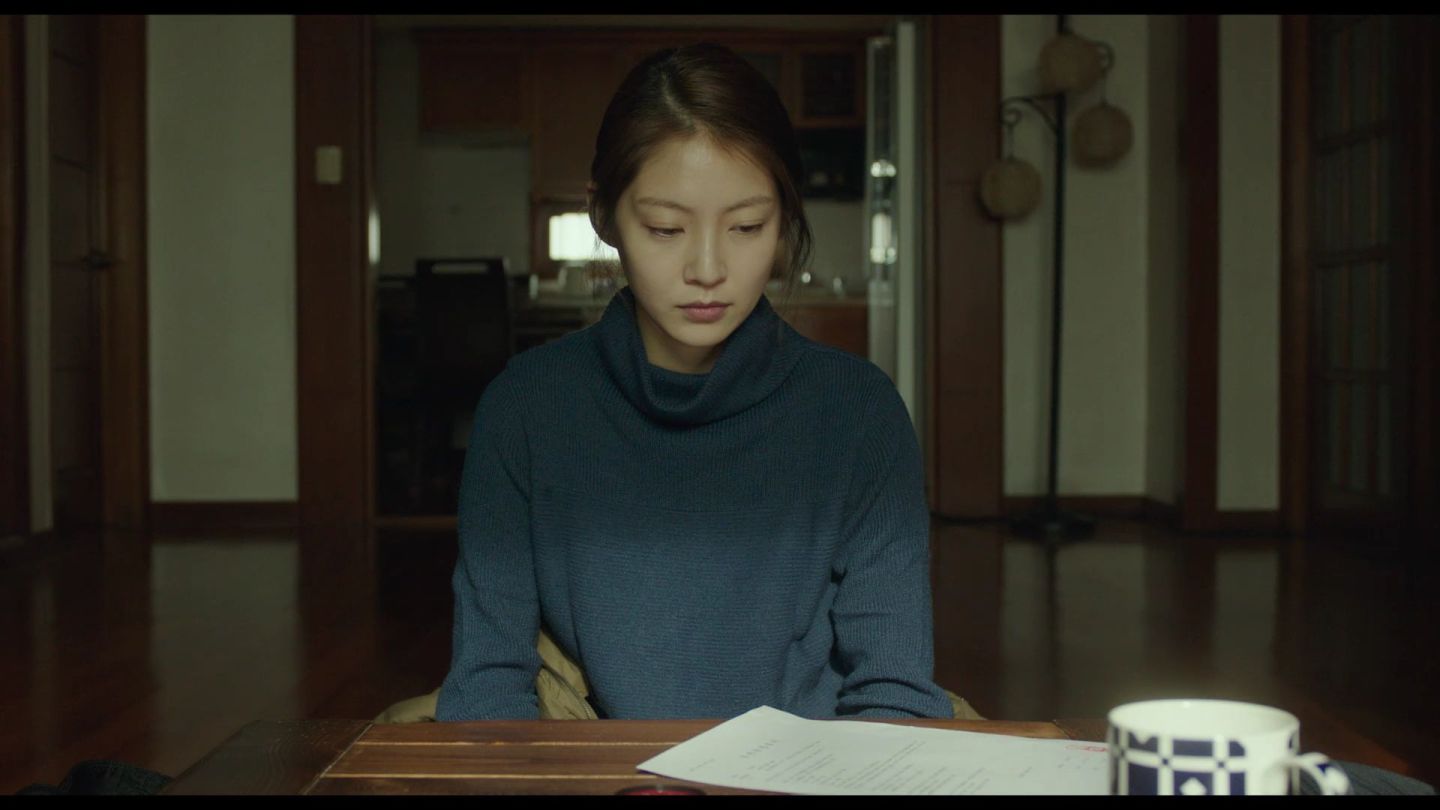 “No one would notice your absence anyway” a belligerent caller ironically argues with an increasingly distressed call centre employee, as so many do in a hierarchical society attempting to bolster his sense of self-esteem by bullying others he perceives to be below him in this case a faceless young woman on the other side of a telephone divide. Hong Sung-eun’s Aloners (혼자 사는 사람들, Honja Saneun Saramdeul), or as the Korean title would have it, those who live alone, is in part a critique of urban alienation but also a deep character study in grief and loneliness in which a young woman’s fear of abandonment has ironically caused her to retreat from the world.

30ish Jina (Gong Seung-yeon) is the number one employee at a credit card call centre despite, as her boss (Kim Hae-na) reveals, having taken an extravagant two days off for her mother’s funeral hinting at the dehumanising nature of contemporary capitalism. Rarely deviating from the script, Jina has an especial talent for lending a sense of warmth and humanity to the otherwise robotic dialogue even playing along with a man who rings up often noted on his file as having a mental illness to enquire if he can get a retroactive credit card that would work if he time travelled to 2002. Mostly, she seems to keep herself to herself but is always staring at her phone screen, taking lunch alone at the kind of restaurant where you order via a machine while watching videos of other people eating. We see her return home to what we assume is a tiny one room apartment, curtains always closed with boxes piled up in front, while her fridge and microwave are right next to the bed. Wondering if there’s a bathroom somewhere seeing as this doesn’t look like the sort of building where you’d have to share, we begin to hear other people speaking assuming the walls must also be thin or else Jina just has noisy neighbours only to realise that she is in fact listening to a live feed of her father’s (Park Jeong-Hak) living room captured from a security camera she set up to keep an eye on her mum.

She seems to see the same slightly strange neighbour (Kim Mo-beom) smoking on the balcony as she leaves and returns, only to discover after reporting a bad smell that he has in fact been dead for at least a week apparently crushed under a pile of magazines he’d been obsessively hoarding. This instance of “lonely death” of a person who is not elderly but in fact a similar age to herself forces Jina into a contemplation of the way she’s lived her life while a change in her working routine as her boss tasks her with training a new recruit pushes her back the other way. An extremely young woman alone in the city for the first time, Sujin (Jang Da-eun) is isolated in other ways struggling to make friends at the office and finding her attempts to bond with reluctant mentor Jina largely rebuffed. Claiming she prefers to be alone, Jina’s aloofness is almost aggressive but it’s Sujin’s empathy, a quality which makes her a bad fit for the call centre, that eventually causes a shift as she alone takes the time to ask the troubled caller why he wants to go back to 2002 only to hear that he is also intensely lonely and longs for the sense of communal happiness he experienced during the World Cup.

Jina had claimed she enjoyed taking the calls, and as we realise she is never really “alone” in that she is always connected via her phone screen if with headphones to block out the outside world or else surrounded by voices in her apartment. The irony is that, as she later admits, Jina is alone because she fears becoming so and the best way to prevent becoming alone is to actively choose it. Fearing abandonment or rejection, she maintains only one-sided connections, a ghost surrounded by other ghosts in the centre of a city. “I hope you find a better place” Jina eventually offers during an awkward telephone apology, a slightly funereal sentiment as if she were seeing someone off not long for this world but also perhaps meant for herself as she begins to exorcise her sense of incurable loneliness willing to brave the risk of heartbreak for mutual connection. “More and more people failing to find their place in society” runs the tag line on the exploitative article about the lonely death, attributing his sense of alienation to a neglectful childhood and societal bullying as if implying it was up to him to fit in rather than for society to find a place for him. Jina meanwhile may in a sense have reassumed ownership over her environment, finally opening the curtains and perhaps no longer confined to a single room while, ironically, taking some time for herself redefining her boundaries with an often indifferent society.