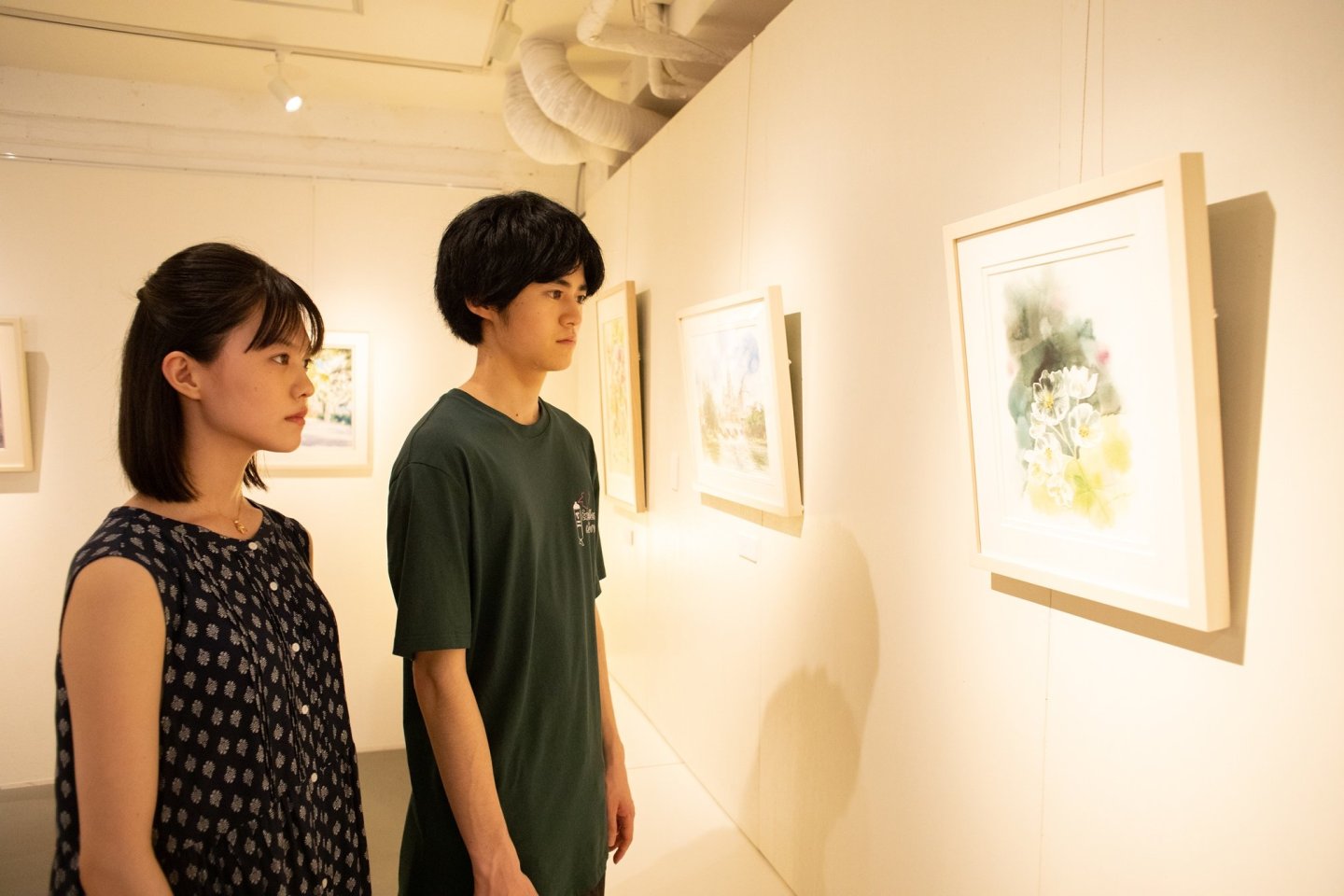 The increasingly prolific Rikiya Imaizumi has become most closely associated with zeitgeisty youth romance accurately capturing the fears and anxieties of 20-somethings in contemporary Japan but brings his characteristically mellow touch to the classic coming-of-age tale in adapting Misumi Kubo’s short story Skeleton Flowers (かそけきサンカヨウ, Kasokeki Sankayo). In contrast to the gloominess of the title, teenage angst is never where you’d expect it to be as the variously pre-occupied pair at the film’s centre strive to deal with their problems with maturity and mutual compassion.

You might for instance expect Yo (Sara Shida) who has been raised by her father, Nao (Arata Iura), since her mother left the family when she was three to feel jealousy or resentment when he sits her down and tells her that he’s fallen in love and wants to get married, especially as the woman he’s fallen in love with, Yoshiko (Akiko Kikuchi), has a small daughter of her own, Hinako. Attempting to be sensitive, Nao frames the new arrangement in a positive light in that Yo will be have more free time to be a regular teen and hang out with her friends rather than skipping out on after school clubs to take care of the household chores, a spin which could backfire in that Yo has obviously been used to being the lady of the house and might feel as if a responsibility she was proud of carrying is being taken away from her or that she’s being displaced by the new maternal presence of Yoshiko. She may in fact feel a little of this, but rather than lashing out or rebelling against the change in her familial circumstances she does her best to accept it with good grace while simultaneously prompted into a reconsideration of the relationships between parent and child meditating on the absence of her birth mother and wondering how and why she could have come to leave her behind.

Riku (Oji Suzuka), her sometime love interest, had started a discussion in their friendship group about their earliest memories Yo unable to come up with anything on the spot but later remembering her mother carrying her into the forest and showing her the skeleton flowers of the title which appear bright white when dry but gradually become transparent as they absorb water. Later she remembers something else unsure if it’s a memory or a dream, a feeling of being suspended in mid-air as her parents argued as if everyone had forgotten she existed. Riku too frequently states that he’s “nothing at all”, feeling himself lost and directionless after being diagnosed with a heart condition later forced to accept that his life will never be the same as it was and his choices are now limited in ways they might not have been before. His health anxiety ironically leaves him emotionally numb, unable to identify let alone express his feelings as he becomes close not only to Yo but another, much more direct, girl in his class Saki (Tomo Nakai) who later does him the favour of explaining exactly what his problems are hoping to jolt him out of his emotional inertia while taking him to task for having been unintentionally condescending in his innate kindness.

It’s this innate kindness that eventually sees both the teens through, each approaching their various worries with a mature compassion. Riku had felt uncomfortable in his familial home and jealous of Yo’s “real family” as she comes to accept her new relationships with Yoshiko and Hinako, but himself comes to understand the complicated relationship between his overbearing grandmother and lonely mother as one of mutual support getting another tip from Yoshiko that even if he feels has no particular talents, also jealous of Yo’s artistic prowess, his ability to support those around him is a talent in itself and an important part of the whole. A robust emotional honesty and the willingness to think things through calmly eventually lead stronger bonds between all concerned, Yo forgiving her birth mother while also embracing a new maternal relationship with Yoshiko, while Riku gains a new perspective of his own and even if he still hasn’t quite learned to identify his feelings is more comfortable with expressing them directly. A gentle, empathetic coming-of-age tale Imaizumi’s teenage drama roots itself in a world of fairness and compassion that allows each of the teens the space to figure themselves out while helping others to do the same no longer transparent in the rain but whole and fully visible not least to themselves.