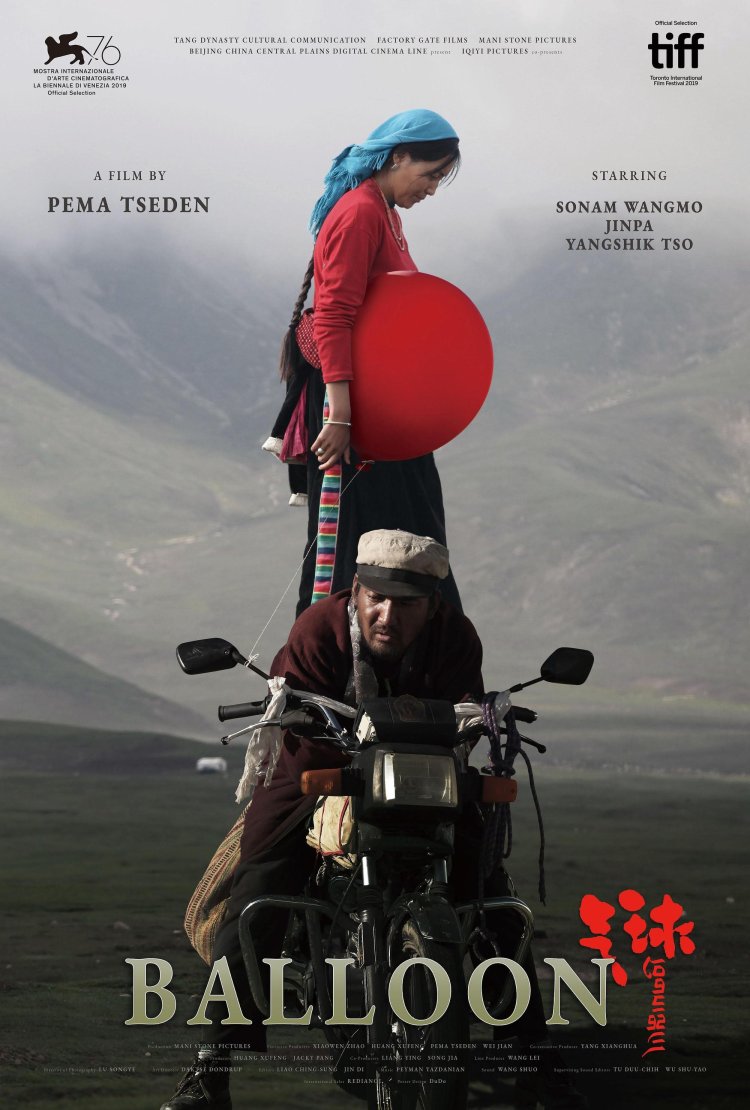 “The world has changed but you’re still so conservative”, a bemused doctor exclaims on learning that a female patient would rather wait around for a woman doctor than disclose a “woman’s problem” to a man. Set in ’80s Tibet, Pema Tseden’s seventh feature, Balloon (气球, Qìqiú / དབུགས་ལྒང་), finds itself at the intersection of multiple worlds and changing times as a small family is quietly torn apart by societal forces beyond its control.

As the film opens, the family’s two youngest sons are busy spying on dad and grandad through the fuzziness of an overinflated balloon. Only, unbeknownst to them, it isn’t a balloon at all but a condom, a slightly embarrassing harbinger of modernity now necessitated by the recently instituted One Child Policy. With the oldest boy away at high school, Dargye (Jinpa) and his wife Drolkar (Sonam Wangmo) have three kids already and paying the fine on a fourth would more or less mean financial ruin. Thankfully, the condoms are free – the only problem being that Drolkar has to go to the clinic in town to ask for them which she finds extremely embarrassing, so much so that she can’t even bear to say the word, almost winking as she whispers “the free things” before quickly stuffing them in her pocket.

What Drolkar wanted to ask the doctor about, however, was the possibility of sterilisation. With the kids constantly nicking the condoms along with the chance that they aren’t 100% reliable, she is in constant worry of what it might mean for the family if she becomes pregnant with a fourth child, especially, she tells the doctor, because Dargye seems to be in a particularly amorous mood at the moment which increases the chances of something going “wrong”. The female doctor can’t quite understand Drolkar’s prudery, or her slightly “old-fashioned” way of thinking. The doctor, obviously, enjoyed a university education. She has a career of her own and a clearly defined individual life as something other than a wife and mother. She wonders why anyone would want to have so many children in this day and age. Having only one means she can devote all of her resources in one direction, ensuring her child can have a good education and the best start in life, whereas Dargye has just had to sell a cow to pay for his eldest’s school fees while the second two stay home.

For Drolkar, who was perfectly happy with the way things were, the world is still an intensely patriarchal place and even if she wanted to (which she doesn’t, really), it’s probably too late to become anything other than a wife to her husband and mother to her sons. This her sister Ani (Yangshik Tso) learned to her cost. Venturing pick up her nephew Jamyang from school she ends up running into an old flame who apparently ruined her life though some kind of “misunderstanding” which led to her leaving home to become a nun. Now a divorced teacher and apparently rising literary star, he hands her a book inspired by their love affair which he hopes might help to explain whatever it was that happened between them, but Drolkar, still outraged on her sister’s behalf, prevents her from reading it – firstly by throwing it on the fire causing Ani to get her fingers burned (again, but literally) pulling it out, and then by telling Ani’s ex to take the book back and refrain from causing any more trouble dragging up the past.

Yet as much as she’s Dargye’s wife Drolkar tries to assert her authority in other ways aside from taking control of her sister’s romantic future. More practical than her husband, it’s she who is in charge of the condoms, and she who worries about the potential effects of a problematic pregnancy on their family. In a society as patriarchal as this, some might say that such things are in any case a woman’s responsibility, but Drolkar’s belief that bearing a child or not is her own decision eventually places her at odds with her husband who becomes temporarily violent when faced with his impotence, powerless to prevent his wife aborting their baby if that’s what she decides, but also at the mercy of the Chinese state who have arbitrarily decided that something as natural as conceiving a child is now a crime.

For Dargye and his family who live traditional lives far from the urban centres of the modern state, it isn’t only the pain and sadness of being forced to abort their child against their will which burdens them but a spiritual taboo in knowing that the child whose birth they’d be denying may be the reincarnated soul of a much loved relative. Drolkar is forced to choose between her Buddhist beliefs and the demands of Chinese communism, her husband’s wishes and those of the state acting as father. Of course she tries to choose her family, but whichever decision she makes may destroy it either through her husband’s resentment or the costs involved with trying to defy the political reality.

Grandad laments that everyone rides motorbikes these days, you never see horses anymore. Times have indeed changed, but in some ways more than others. While Dargye seems to draw vicarious power from the randy ram he’s borrowed from his friend to stud his sheep, a figure of robust and virile masculinity, he’s effectively neutered by the society in which he lives. Conversely, Drolkar, according to the doctor at least, ought to feel herself liberated but is left with no real choice at all. Only the kids, cheerfully playing with the instruments of their parents’ oppression, have learned to find innocent joy in the midst of such uncertainty while the modern world creeps in all around them.

Balloon was screened as part of the 2019 Five Flavours Film Festival.