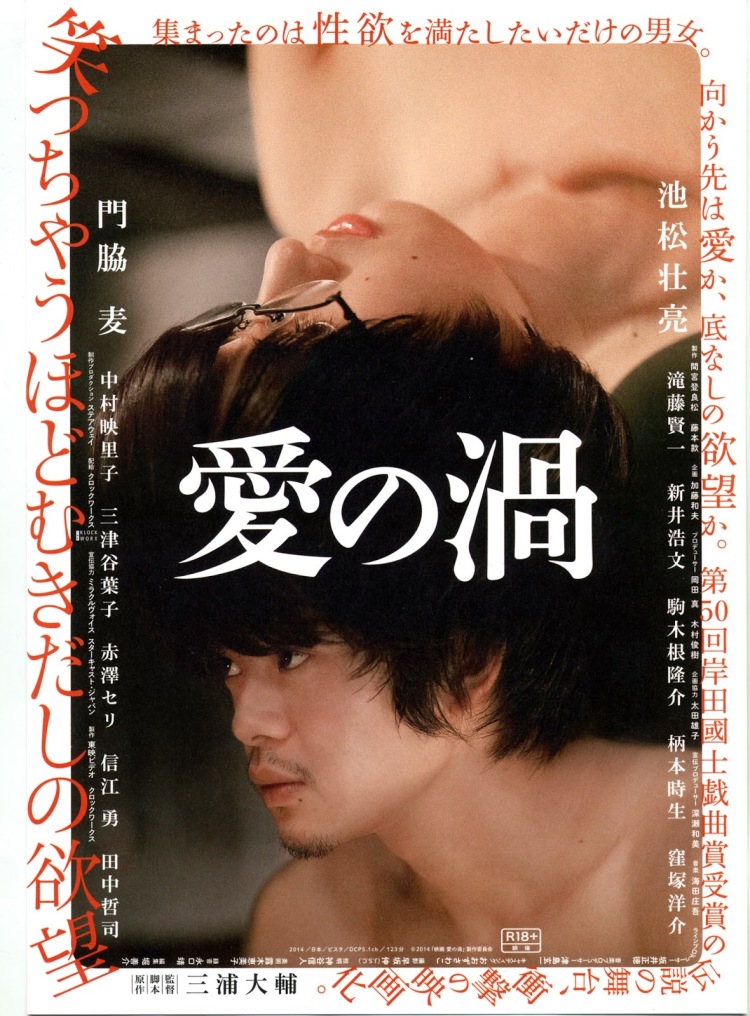 No names, no strings. That’s the idea at the centre of Daisuke Miura’s adaptation of his own stage play, Love’s Whirlpool (愛の渦, Koi no Uzu). Love is an odd word here as it’s the one thing that isn’t allowed to exist in this purpose built safe space where like minded people can come together to experience the one thing they all crave – anonymous sex. From midnight to 5am this group of four guys and four girls have total freedom to indulge themselves with total discretion guaranteed.

The four couples are a disparate group which includes a primary school teacher, office lady, shy college student, and a brusque regular who apparently comes to the club five times a week. The male side consists of a slick salaryman, a freeter, a factory worker and an anxious NEET who’s cleaned out his bank account just to be here in this extremely expensive, upscale sex club. After receiving the instructions from the owner (shower first, after sex, after going to the toilet, always use a condom, and respect the women’s right to say no), the group sit awkwardly wearing only their towels waiting for someone else to kick things off.

Everyone is being extremely polite to one another, the women beginning to talk amongst themselves whilst the men do the same. Everyone has come here for the same reason but it’s not as quite as straightforward as they thought it would be. Soon enough, people start to pair up an head downstairs but after the initial ice is broken the edges sharpen, relationships change, and a kind of Bacchanalian harshness begins to take over.

Once inside the split level, trendy club style environment, the guests spend the entirety of the evening naked save for their white bath towels but this is about as far from intimacy as it’s possible to get. They may have all come for one reason, but they each had various different motives for doing so. The office lady and the school teacher are both attractive young women, confident in what they do and don’t want, and would prove a hit in any club or bar (though this is a safer option). The freeter and the salaryman could say the same though the salaryman spends half the evening phoning his wife to explain that he’s been kept out drinking with a boring colleague. College girl and Neet are both too shy to get it on independently, leaving the cynical regular and the overweight factory worker as the odd ones out. It’s not long before they’ve begun to dissect each other, ticking off the check list like remembering to buy washing powder and then discussing the merits of “Ariel” vs “Persil” with your fellow “shoppers” in the checkout line. Utilitarian as it is, as the night goes on the barriers fall away leaving both wild abandon and cruelty lying behind them.

Things are reinvigorated half way through when another couple join, a husband and wife duo who each claim to be 100% OK with how this is going to work but, as it turns out, one of them was more serious than the other. By this point, relationships have begun to solidify themselves and shy Neet has grown attached to the unexpectedly raucous, repressed college girl. Such attachments are unwise in an environment like this, and can become dangerous if everyone does not remain on the same page as to what’s going on. At the end of the evening, the guys are asked to wait so the girls can leave first – to help prevent stalking. This is no strings, remember. No names, no phone numbers, none of this ever happened.

This intense need for secrecy is understandable yet speaks something to the oddly specific conflict between repression and the open expression of erotic desire that is permitted inside the club but only if you follow its rather strict (if very sensible) rules, not to mention the arcane, underground directions needed to find it at all. For some the reason for coming here was loneliness but what they’ll find is only likely to exacerbate the aching lack of connection they already feel. The case of the college student becomes the most interesting as she fights both her own shyness and the intense shame she feels in regards to her own sexual desires. After the fact, she feels as if she’s betrayed herself, as if the “other self” that emerged during the previous night’s proceedings is a shameful doppleganger that must now go back into hiding. She wants to forget this happened, go back to being a lonely college girl but for the NEET, it’s the opposite, he feels unreal now – as if he left his “real” self behind in that unreal space.

A sophisticated take on modern human relationships, Love’s Whirlpool occasionally pulls its punches in opting for a satirical tone and only really skims the surface of why places such as these still need to exist. Stylishly shot and explicit without becoming exploitative or sleazy, Miura’s film proves a refreshingly nuanced, mature take on modern sexual behaviour even if it stops short of probing into some of the darker aspects that flicker around its edges. If Love is a whirlpool, desire is a tornado, but where a whirlpool may drag you under you’ll eventually float to the surface gasping for air. After a tornado burns through, all you’re left with is ashes and emptiness. Modern love, indeed.