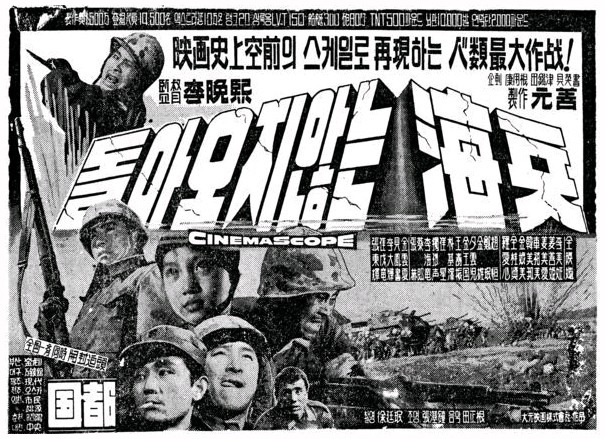 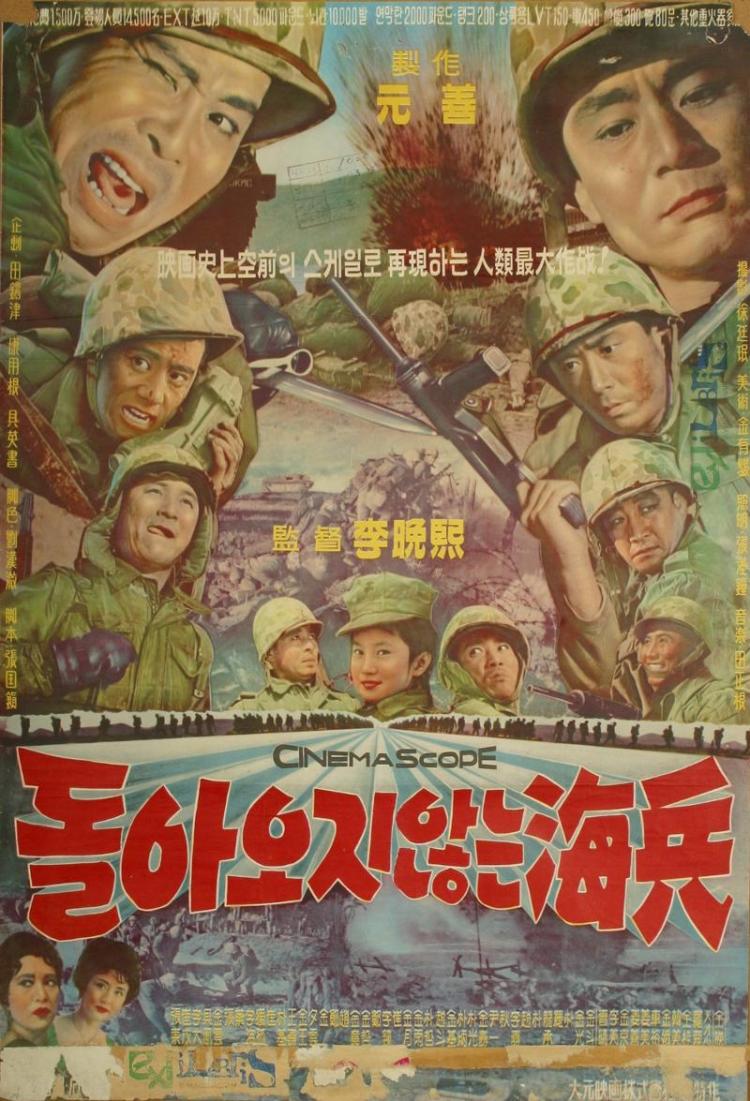 Lee Man-hee was among the most prolific of Korean directors until his untimely death at the age of just 43 in 1975, but even among so many well regarded works The Marines Who Never Returned (돌아오지 않는 해병, 돌아오지 않는 해병, Doraoji Anneun Haebyong) has taken on an especial place in Korean film culture. Lee had himself served in the Korean War and brought his own ambivalent attitudes to the piece, expressing both an abject rejection of the senseless loss of life but also a warmth and nostalgia for the camaraderie born only out of such immediate danger. The film’s title, as melancholy as it is, points to this same ambivalence by signalling the eventually unhappy fates of these ordinary men but also according them a ghostly, unresolved future.

In the midst of the Korean War, a squad of South Korean soldiers is on patrol and taking fire from the Chinese in an urban environment. While they bide their time in a trench, a young girl and her pregnant mother run out of a nearby building. The girl runs clear but the mother is shot and killed in the crossfire. One of the soldiers is deeply struck by the scene and insists they at least make sure the little girl is safe. Pushing deeper into the building, the soldiers come upon a truly horrifying, hellish scene of men trussed up and hanging from the ceilings while bodies of the townspeople lie piled along the floor. The same soldier who wanted to save the little girl finds his own sister among the dead, just one face among so many.

From this point on the tale is narrated by the little girl, Young-hui (Jeon Young-sun), who is adopted by the troop of marines and smuggled around inside an old army kit bag so that the superiors do not find out about her presence. Young-hui proves a resilient little girl who obviously misses her parents but begins to care deeply for the soldiers who have taken her in. Giving each of her new uncles nicknames, Young-hui becomes the squad’s mascot and a symbol of everything it is they’re fighting for. Yet this makeshift family also has its share of difficulties. A problem arises when Young-hui recognises a new recruit, Choi (Choi Moo-ryong), as a man from her village. Choi is the brother of the man who joined the other side, took Young-hui’s father away and killed the sister of Private Goo, discovered so casually among the many dead in Young-hui’s village alone.

The conflict between Choi and Goo is emblematic of many ordinary families throughout Korea as fathers and sons, brothers and sisters, decided on different paths and found themselves on opposing sides of a war. Choi, as is pointed out, is not responsible for his brother’s actions – he clearly does not condone or agree with them, but still he feels responsible enough to understand Goo’s anger and resentment. Goo in turn realises his anger is pointless and misdirected but is powerless to change the way he feels. This situation is no one’s fault, but they’ll all pay the price anyway.

Lee spares no expense in recreating the hellish battles scenes more akin to the first war than the second with its outdated tanks, dugouts, and trenches. The easy, familial life of the camp soon gives way to action and danger as the squad meet their ends one by one. Away from the battlefield the men feel displaced within their own country – caught in the midst of a civil war yet also subjugated by foreign forces, barred from UN only bars and referred to as “tuppenny Koreans” by the “hostesses” in comparison to their big spending compatriots. Making his goodbye speech, the commanding officer instructs his comrade to return home and ask if anybody really needs to go to war, but rising from the trenches their thoughts are all for their fallen friends who will never see home again. These men remain “lost” on the battlefield, a lingering memory of loss and sacrifice which is impossible to resolve even so many years later.