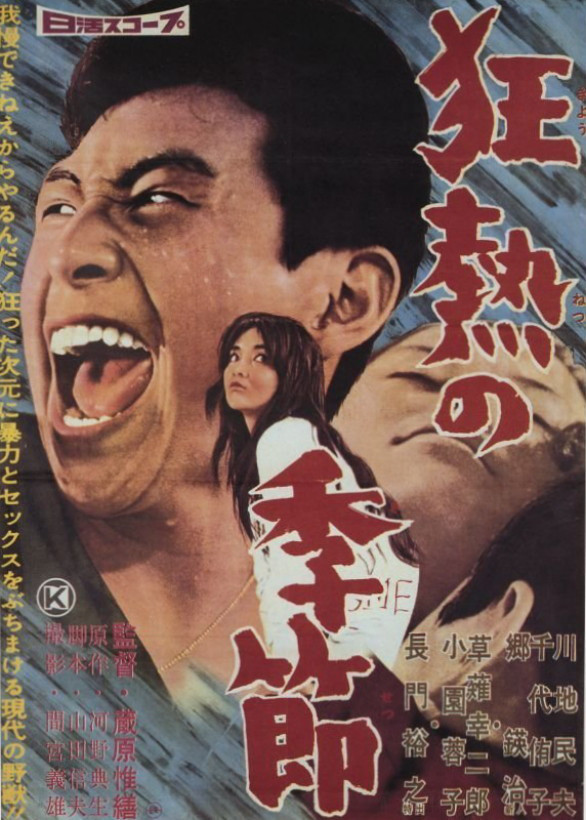 Youth was at an intense point of crisis in the Japan of 1960. The old pre-war ways were out, but what was youth supposed to do now – a question which found no answers. Whereas the intervening 15 years since the end of the war had been filled with somber soul searching and an intense dedication to forging a way through, the young of the late ‘50s were losing interest in rehashing the past and becoming keener to voice their concerns over what some saw as an undue influence wielded by the Americans. 1960 saw the biggest public protests in public memory as the citizens of Tokyo – many of them students and young people, took to the streets in protest of Japan’s continued reliance on America for military protection and the various comprises and complicities they felt that entailed.

Meanwhile, in cinema rebellious youth had become a bone of contention – the so called “Sun Tribe” movies of the mid 50s, inspired by the novels of Shintaro Ishihara, had painted an unflattering picture of decreasing morality among the young. Rising economic prosperity had given birth to a class of overindulged, privileged young men and women who frittered their parents’ money away on fast cars, drugs, jazz, and promiscuous (often violent) sex. The bright young things of the early ‘60s, young people who lived without morality or purpose, terrified the older generations who feared their kids too might wind up devotees of the sun tribe and reject the world they had strived so hard to rebuild.

The Sun Tribe movies were so controversial that the studio, Nikkatsu, was eventually forced to halt production but Japan’s rebellious youth was a subject which refused to go quietly. Koreyoshi Kurahara’s The Warped Ones (狂熱の季節, Kyonetsu no Kisetsu), released in 1960, revised the myth of the Sun Tribe by looking at it from the other side – these were no ennui filled elites, the crazed youth of the Warped Ones are poor boys and dropouts living by their wits and caring nothing for the rules of a society which has continually rejected them.

Akira (Tamio Kawaji), a petty teenage delinquent, gets caught pickpocketing in a jazz club and is sent for a spell in a reform school. Inside he meets another young man in a similar situation, Masaru (Eiji Go), and decides to team up with him after they’re released. Meeting up with fellow delinquent Yuki (Yuko Chishiro) – a casual prostitute hooking foreigners, the three decide to have some fun. Boosting a car and heading to the beach, they spot additional spice in the very reporter who got Akira arrested in the Jazz bar out for a promenade with his fiancée. The trio drive fast at Kashiwagi (Hiroyuki Nagato), knocking him flying before Yuki jumps out and grabs the girlfriend, Fumiko (Noriko Matsumoto), and bundles her into the car. Driving to a secluded spot, Masaru and Yuki pair off while Akira rapes Fumiko and then cruelly abandons her with only the “kindness” of pointing her towards a local police station.

Akira is the new kind of delinquent so feared by traditional society. He has no job or intention of forging a career – he lives on the thrill of petty crime, giving full vent to each and every urge his adolescent body conjures. His friendship with Masaru is perhaps his only redeeming feature but it’s unclear how far this really runs even if his only particular code makes the idea of any non transactional action with Yuki off limits. Masaru’s romance by contrast does appear to be deep and genuine – he can get past Yuki’s life as a casual prostitute and is even willing to support her when she falls pregnant with a child that is most likely not his. To does this, Masaru considers joining a gang which is something Akira’s individualism will not permit him to do. “Only people who don’t listen to jazz join gangs” he opines superciliously. His is a life of freestyle joys and hedonistic pursuits in which his will is all and his body his only instrument.

Kurahara opens with a heady, swirling shot of the ceiling in the jazz club Akira likes to frequent while the score dances wildly in the background. Akira’s head is filled with the sound of “good” jazz. He moves, breathes and lives his own symphony. His world is indeed noisy – cramped tenements with paper thin walls and and the ever present rumble of passing trains give his life its own kind of oppressive rhythms, echoing the inescapability of his dead end existence. The music is his escape and the only thing keeping him “sane”, only “sane” means his self destructive tendencies become externalised as a cruel and sadistic game of revenge on the society which refuses to accept him. Akira is indeed “warped”, life is an absurd joke to him, but he is far from alone and his alienation has very real causes which lie not in the evils of Jazz music and American individualism but in a stratified, high pressure society which leaves its restless young with little to survive on save the instant gratification of their baser urges.