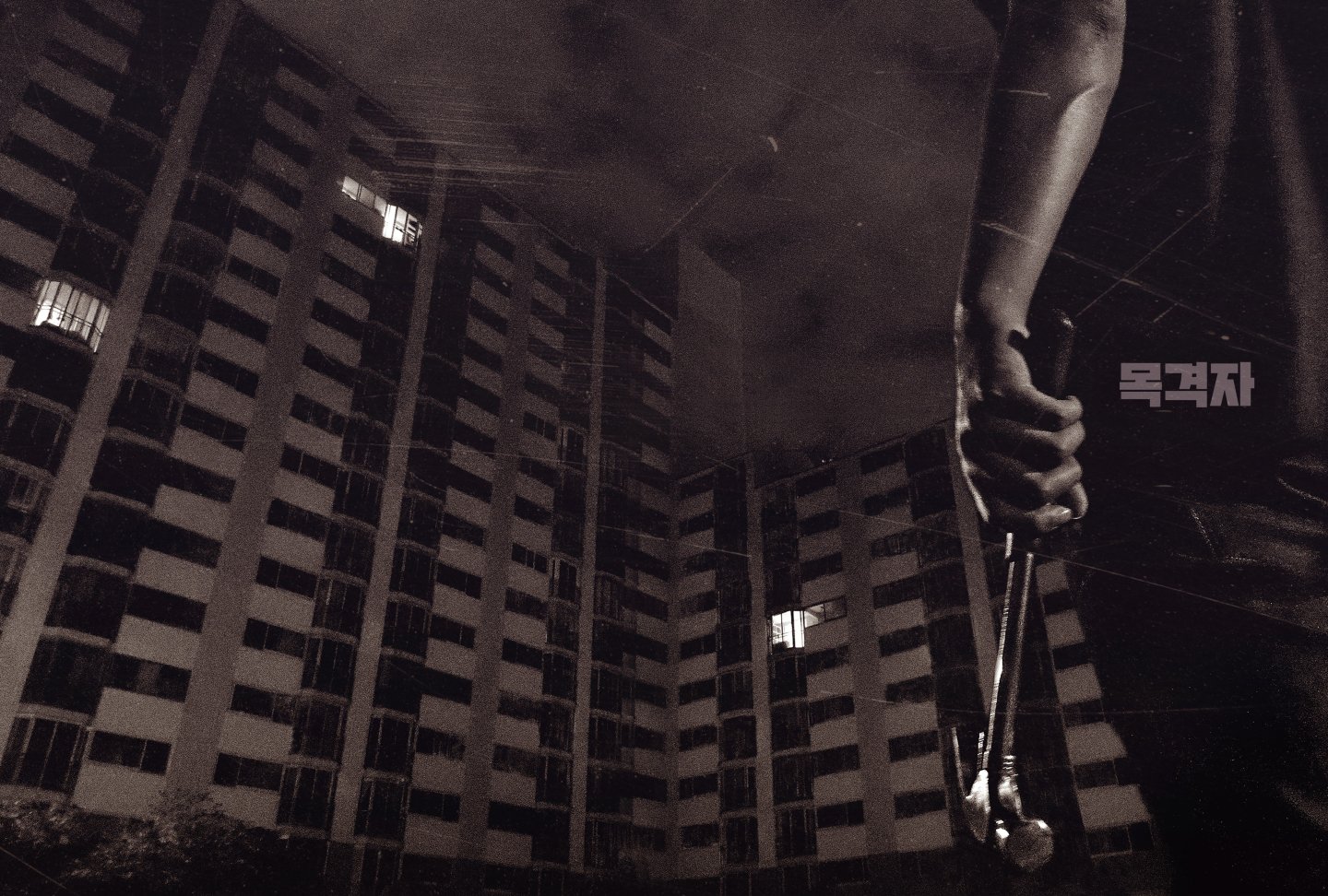 The murder of a young woman outside of her New York apartment block in 1964 became a psychology text book standard thanks to the fact no one had raised the alarm or come to help her. Later investigations more or less debunked the so called “bystander effect”, at least in this instance, but it remains broadly true that those who find themselves witnessing a distressing incident fully expect that “someone” will be dealing with it, conveniently forgetting that they too are “someone”. The hero of Cho Kyu-jang’s The Witness (목격자, Mokgyeokja) is only one of many to temporarily distance himself from his community when he fears he has locked eyes with a killer and inadvertently made his family a target for retribution.

Sang-hoon (Lee Sung-min), a middle-class lawyer, is riding high after buying a new apartment (with a hefty mortgage) for his wife and daughter. Rolling home drunk after an evening drinking with colleagues, he opens yet another beer and gazes out over the balcony of his new apartment musing on how great his life is only to be confronted with a screaming woman being chased by a violent man in the courtyard. She falls and the man strikes her. Sang-hoon struggles for his phone but drops it in drunken shock. His wife emerges from the bedroom and alerts the killer to their presence by turning the lights on. Sang-hoon snaps them off and goes back to the balcony where he is convinced the killer has seen him. Paranoid, he forgets all about the poor woman bleeding on the concrete below and spends the night in his hallway clutching a baseball bat just in case.

He doesn’t know it yet, but Sang-hoon has indeed made himself a target for a marauding “random” killer. Afraid and ashamed, he decides to keep quiet. It would be easy enough to read Sang-hoon’s unwillingness to get “involved” in other people’s business as a hangover from an upbringing in an authoritarian regime in which keeping your head down and your nose clean might be essential tools for survival, but it’s also fair to say that his attitude is defined as much by notions of middle-class respectability as it is by cowardice and selfishness. An old busybody in the apartment block is constantly banging on about the house prices, getting the residents to sign a legal waver promising not to cooperate with the police or the media to avoid the name of the community becoming linked with violent crime. Sang-hoon says he wants to protect not only his wife and daughter, but their home too. His hopes and dreams are bound up with conventional homeownership. This is the way he intended to fulfil his male obligations to protect his family, but now it’s being threatened in a way he never expected and he finds himself tested.

Despite himself, Sang-hoon does feel he ought to help those in need. He bristles when his wife wants him to help out a friend whose child was injured in a car accident that the police didn’t bother to investigate properly, because he knows it’s a lost cause and she’s better to settle. He feels sorry for her, but not enough to rock the boat. Being a lawyer he perhaps knows what a risk it can be when the wrong people know where you live, but he’s at constant battle with himself knowing that the killer is still out there and will likely kill again. If he’d only called an ambulance instead of cowering by the front door, the poor woman might have survived – her death is on his hands as much as the killer’s because he chose to do nothing. The body count will only rise all while Sang-hoon tries to hedge his bets, calculating whether he’s better off keeping quiet and hoping the killer appreciates his complicity or surrendering himself to the police in the hope that they can protect him by taking the killer out of the picture.

Sang-hoon’s desire not to get involved has left him very involved indeed. He hoped it would all go away if he turned a blind eye and kept himself out of it, but like it or not he is a member of a community and he has a responsibility which cannot be abnegated. It turns out the best way to protect your family is protecting other people’s, maintaining a herd immunity to the threat of violent crime. There is, however, a reason they tell you to shout “fire” and not “help” – people are selfish and if they hear fire they know they are in danger too so it’s in their interest to come running, if it’s only you in danger they may not put themselves out. Sang-hoon’s brush with the embodiment of random threat does at least release him from the ingrained isolationism of the aspirant middle-classes in which any kind of fellow feeling is distinctly frowned upon, allowing him free rein to embrace his natural tendency towards altruism safe in the knowledge that his desire to help is not a weakness but a strength that will keep his family safe through the interconnectedness of a compassionate community.

The Witness was screened as part of the 2018 London Korean Film Festival.