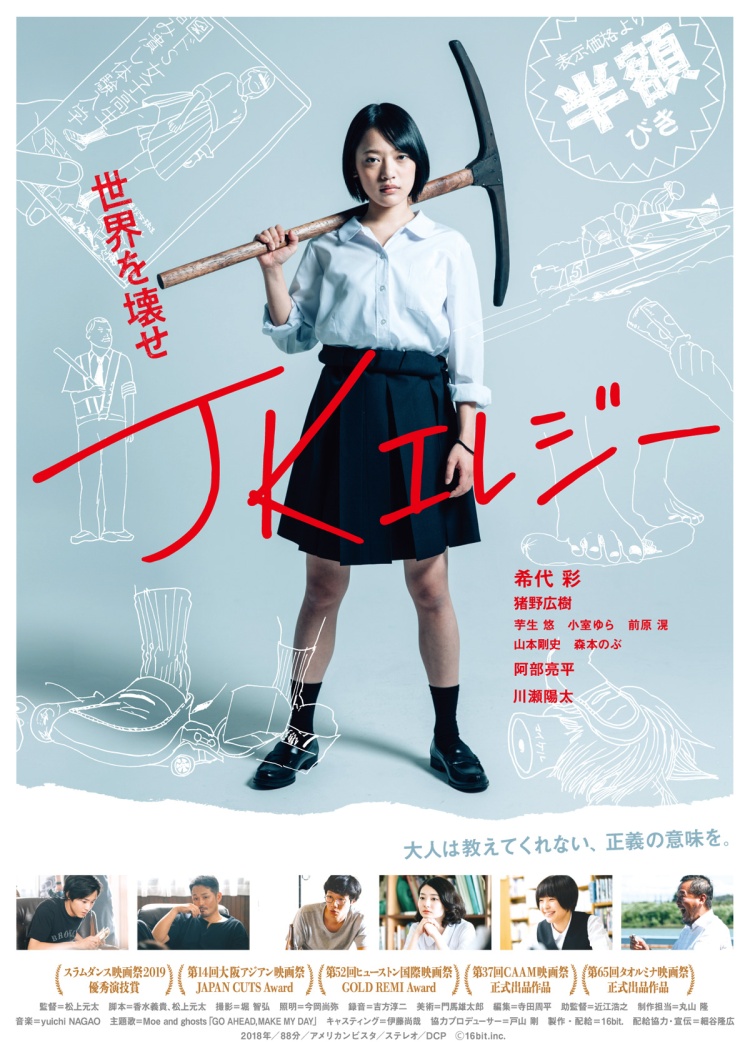 High school is tough for everyone, but some have it harder than most. Cocoa (Aya Kitai), the heroine of Genta Matsugami’s Demolition Girl (ＪＫエレジー, JK Elegy), struggles to envisage a way out of her dead end existence in small town, rural Japan but begins to find a new sense of purpose when presented with unexpected opportunity. Circumstances, however, continue to conspire against her as she fights bravely for her right to define her own destiny while those around her all too often try to drag her down.

17 and in the last year of high school, Cocoa isn’t planning on going to uni like her friends because her family is poor. Cocoa’s mother died several years ago and her father (Yota Kawase) has been a feckless mess ever since. A gambling addict, he spends his days at the races frittering away the meagre stipend he gets through fraudulently claiming disability benefit. Meanwhile, Cocoa’s equally feckless 26-year-old brother Tokio (Ko Maehara) has come home from Tokyo after failing to make it as a comedian and spends his days lounging around at home. Cocoa is the only one working, providing for the entire family with her part-time job at a sausage stand at the amusement park. Just recently she’s started supplementing her income through starring in some “videos” her brother’s friend and former comedy double act partner Kazuo (Hiroki Ino) has been making with the hope of flogging them to the select group of people who might find footage of a girl in high school uniform stomping on things “satisfying”.

Symptomatic of the perils of small-town life, Kazuo offers the videos to an old friend who owns the local rental store, not quite realising that his old buddy Naoki (Ryohei Abe) is now what passes for a gang leader in these parts. Still, Kazuo is not a bad guy, just a naive one who realises he’s hit his wall and this small-town existence is all there is waiting for him. Knowing he’s in way over his head, he eventually tries to do the right thing and genuinely wants to see Cocoa succeed even when he knows that means his cash cow will be leaving town.

Cocoa, meanwhile, has become re-energised after a well-meaning teacher tells her she is probably bright enough to get into a national university (rather than just a private one) where the fees are much more manageable. Still unconvinced, she becomes determined when her aunt tells her that her late mother had been putting money away for her especially for university. Sadly, it turns out her wastrel father may have already burned through that, but her resolve is undampened. She’s seen a way out, and she’s going to take it no matter what it takes. As her aunt tells her, she needs to get out of that apartment otherwise she’ll be stuck there forever “caring” for her feckless family members while they sit idly by frittering her money away on easy pleasures.

Still, it won’t easy. Circumstances conspire against her from a stern school board suspicious about her extracurricular activities to the ominous presence of the petty thugs who’ve become quite interested in the potential of the videos. Cocoa’s 18th birthday (which her family didn’t even seem to really remember) turns out to be one of the saddest ever as she parties with her two friends in a karaoke box and is then forced into the realisation that they’re each standing a crossroads and likely taking different paths. Supportive as they are, her friends can’t seem to understand why she got involved with the videos in the first place. From much more comfortable backgrounds, they struggle to comprehend her desire for ready cash as a means of escape or her yearning for independence and to be free from her burdensome family who over rely on her for support but offer very little in return.

A subtle condemnation of systemic inequality and the innate unfairness of a world in which circumstances of birth determine almost everything, Demolition Girl revels in its heroine’s resilience as she decides not to be beaten down by those who tell her she cannot make it out. A beautifully lensed evocation of small-town life, Matsugami’s debut is a wonderfully observed coming of age tale in which its determined heroine learns that she can choose to do things “her own way” without compromising her sense of integrity or having to leave her friends behind.

Demolition Girl was screened as part of Japan Cuts 2019.