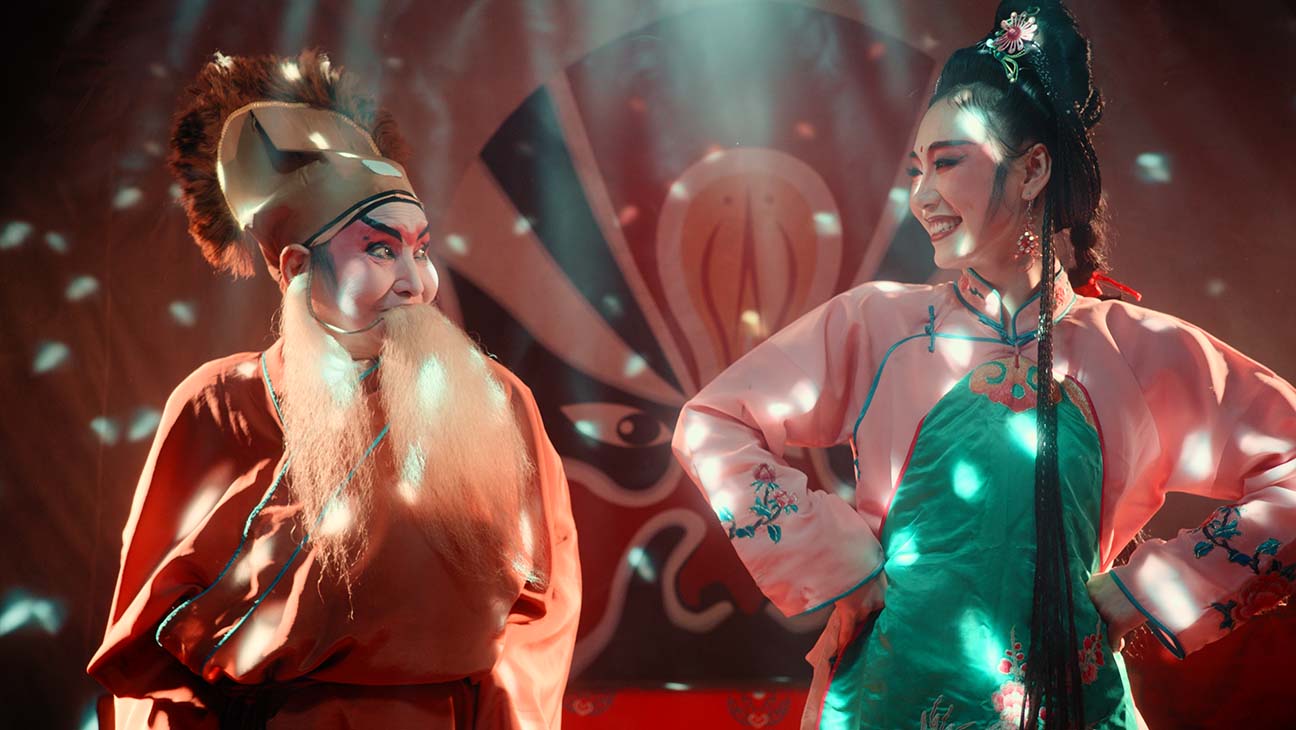 “Boundless is the land for all to sing” according to the reverberating strains of a Sichuan Opera troupe practicing their art in the open air, ironically surrounded by the ruins of a decaying land. According to Chinese cinema at least, China is very much “under construction” though there is considerable ambivalence about the costs involved with such rapid “progress”. According to Johnny Ma’s second feature To Live to Sing (活着唱着, Huózhe Chàngzhe), Sichuan Opera maybe one of them though melancholy as it is and performed by real life opera stars, Ma’s film perhaps suggests that art’s transience is an unavoidable consequence of modernity.

We first meet our heroes, the Jinli Sichuan Opera Group, giving a small stage demonstration at a local cultural event straight after a team of high school girls in cheerleader uniforms inexpertly performing a traditional fan dance. Obviously running on a shoestring budget, the troupe gets around by means of a motorbike pickup truck which allows them to advertise on the road. Their main base, however, is a dilapidated theatre in a small corner of a rapidly depleting village.

The theatre, such as it is, is the only holdout surrounded by the rubble of the old town currently being “redeveloped” in keeping with the modern China. The wolf is quite literally at the door as the bulldozers’ claws tear through walls like an all powerful villain in an opera casting a spell of destruction over a disobedient kingdom. Leader of the company, Zhao Li has been ignoring the numerous “for demolition” tags all over the building hoping that something will come up, but now she’s had a letter to tell her that the end is nigh and she has no idea what to do.

Meanwhile, she’s also worrying about the future of the troupe seeing as they are all ageing and, according to her niece Dan Dan, Sichuan Opera isn’t “cool” anymore which why most of their audience members count themselves among the very elderly. Dan Dan, the troupe’s bright hope and leading lady, is conflicted in her role as a potential saviour. Mildly resentful at having been brought up in the trade, she both loves and rejects it, sorry to see it go but sure there is no future for traditional opera in the modern world. In her spare time she dances to K-pop hits alone in her room and, unbeknownst to Zhao Li until she’s guided by to the realisation by the manifestation of a stock Dwarf character, Dan Dan has taken a part-time job singing in a cabaret bar both to express herself and to earn a little extra money.

As the crisis deepens, the opera in Zhou Li’s head intensifies. Entering a dream stage, she finds herself once again in full costume valiantly battling villains only to emerge victorious but alone striking a heroic pose atop a pile of rubble. Worse, her fighting spirit threatens to harm those close to her including her beloved niece Dan Dan who longs to leave the world of opera behind but knows to do so would be to break her aunt’s heart. While her well-meaning husband goes behind her back to try and earn a few extra pennies by selling out the art of opera with a cheap “mask changing” act in a local hotpot restaurant, she makes use of a connection for a last ditch effort to get bureaucracy interested in her case by inviting a local dignitary to a show for which they’ll be pulling out all the stops, but also performing for free to make sure they get the punters in.

Zhao Li’s efforts prove fruitless. You can’t stop progress, after all. But, it’s not just the troupe who feel the sadness of something passing but the audiences too. With no performance scheduled, the old regulars dutifully show up to see the troupe off lamenting that there’s nothing left for them to do in this tiny, crumbling village. Sichuan Opera maybe be “uncool” to some, but it was the only splash of colour in an otherwise dull existence for many of the elderly residents and so it’s sad to say goodbye. At once signalling the tragedy of this moribund world and suggesting it’s time to let it go, Ma closes with a note of poignant, perhaps ironic positivity. “Boundless is the land for all to sing”, the Sichuan Opera troupe reminds us, rendering the ruined building that was its former home irrelevant as they offer their song to the open air for nothing more than the love of it.

To Live to Sing was screened as part of the 2019 BFI London Film Festival.