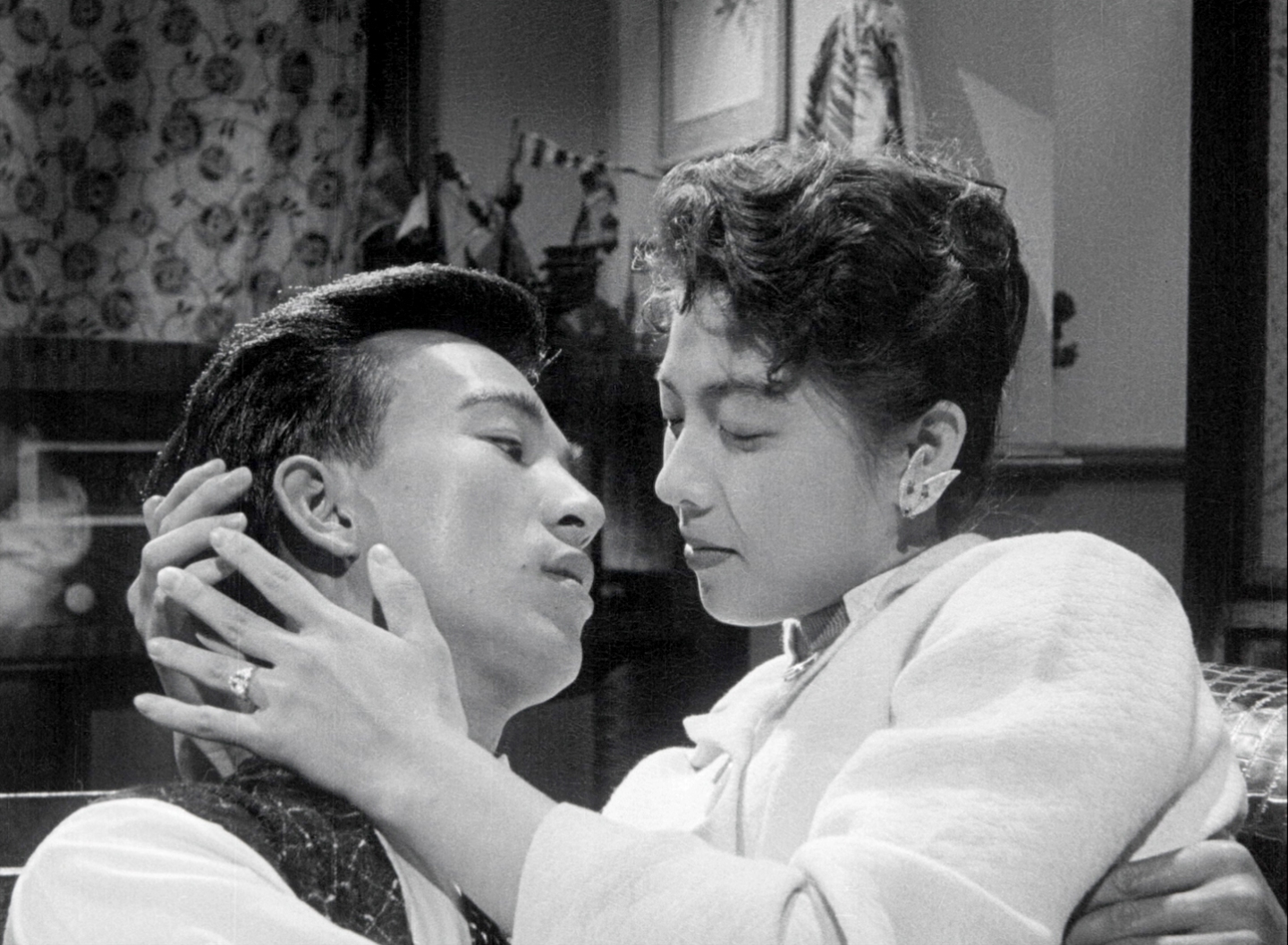 Written by Hayley ScanlonPosted on September 11, 2020

Emotional pain flows out of wronged love, according to the gently judgemental voiceover cutting in at random moments throughout Lin Tuan-Chiu’s familial melodrama The Husband’s Secret (丈夫的秘密). A tale of changing gender roles and a conservative society, Lin’s film finds a frustrated female solidarity but also insists on the repair of the traditional family even when that family may not take the form one expects or in fact be entirely healthy while romantic love which destabilises the social order must be suppressed in order to preserve the maternal which only reinforces it.

The film opens with Tshiu-Bi (Wu Li-Fen) meeting some of her old friends from college at a reunion only to be accidentally shamed by another woman boasting about her already large family. Despite being apparently happily married to rising executive Siu-Gi (Chang Pan-Yang) and living a financially comfortable life in a large Western-style home with a live-in maid, there is discord in the marriage because the couple have no children. A moment of crisis presents itself when Tshiu-Bi runs into her old friend Le-Hun (Chang Mei-Yao) who had been missing from the reunion and learns that the reason for her absence was shame. Seduced and betrayed, Le-Hun is now a single mother living in desperate poverty, forced to pawn her coat in the middle of winter and pound the streets amid the falling snow looking for work. She is always turned away, prospective employers complaining that she looks like a drug addict because of her shivering in the cold, sunken cheeks, and hollow expression. When her young song Ah-Siong is ill and she needs money for hospital treatment, she is forced to swallow her pride and ask Tshiu-Bi for help. Tshiu-Bi gives her a diamond ring to pawn, bringing her into conflict with her husband who is stunned to hear the name and realise that Le-Hun maybe the girlfriend he broke up with to agree to an arranged marriage with Tshiu-Bi to further his business prospects.

Tshiu-Bi of course knows nothing of this, bringing Le-Hun to stay with them after she is found passed out in the street and hurt when she abruptly leaves after realising that Siu-Gi and her old friend are now a married couple. As Siu-Gi later acknowledges, much of this is all his fault in the moral cowardice that saw him abandon a woman he loved to make an advantageous match. He may have tried to be a good husband and is not a bad man, but he has perhaps behaved badly and the consequences of his bad behaviour are visited on the women in his life alone. Siu-Gi wants to make amends, but is also overwhelmed by old emotions. Perhaps he envisages a solution in which he could have it all, protect Le-Hun and the son he suspects may be his while maintaining his married life and his wife none the wiser.

Unlike Tshiu-Bi, Le-Hun has certainly been unlucky, ruined by an early failed affair with a bad man who turned out to be a petty criminal and forced her to become a bar hostess to support him. She left Sing-Liat after discovering him with another woman, but he continues to pursue her, damaging her earlier relationship with Siu-Gi and disrupting every opportunity she takes to make a life for herself, seemingly never allowed to forget that she is a “fallen woman” as if haunted by her transgression. Le-Hun is even evicted from her flat when the landlady’s drunken husband tries it on while she is half-conscious with fever, the landlady choosing to blame her rather than the husband in a theme which will be repeated when the prior relationship between Le-Hun and Siu-Gi eventually comes to light. Tshiu-Bi’s uncle, who had arranged the marriage, reminds her that boys will be boys and having a mistress is perfectly normal, keen that she not cause further scandal with a divorce over something as trivial as a husband’s infidelity. Running into Le-Hun by chance after she had fled to another town, Siu-Gi gives in to his passion and spends the night with her, justifying himself that what they have done is perfectly natural while the judgemental voiceover cuts in to ask how educated people could behave in such an uncivilised manner.

As a result of their night of passion, Le-Hun becomes pregnant and finds refuge with a close friend and fellow bar girl who helps her to raise Ah-Siong, but once the pregnancy is discovered the uncle reassumes control and lays claim to the baby. He orders Le-Hun never to see Siu-Gi again, to which she agrees already overcome with guilt in having betrayed her friend by sleeping with her husband, but also makes the completely unreasonable demand that he will take the baby away after it’s born, apparently intending to put it out for adoption. Tshiu-Bi, meanwhile, sees he obvious solution and wants to keep the child as her own which angers the fiercely patriarchal uncle because it would mean that the mistress’ son inherits the estate (Siu-Gi had married into their family which is why he has a different surname to the one he used when he was with Le-Hun, perhaps explaining his feelings of resentment and emasculation in the reversed power balance of his marriage).

Yet the illicit affair provides a point both of fracture and of healing which turns the single point of crisis into two definitively separate yet viable branches. While the relationship between Le-Hun and her friend seems perhaps transgressively close and hints at an alternative family born of female solidarity of the kind that Tshiu-Bi tried to offer to Le-Hun but was frustrated by romantic crisis, Le-Hun is eventually forced to reunite with her no-good gangster boyfriend who has apparently reformed after a spot in jail and now bitterly regrets his treatment of her. Wayward men are brought back into superficial conformity in being forced to assume a degree of responsibility as husbands and fathers, while women are expected to suppress their emotions and stoically endure the consequences of male failure. Nevertheless, even while Le-Hun’s friend is seemingly left out in the cold, the social order is preserved in the repair of two “happy” families cauterising the wound of transgression through the reinforcement of the conservative.

The Husband’s Secret streams in the UK 18th to 27th September as part of the Taiwan Film Festival Edinburgh.