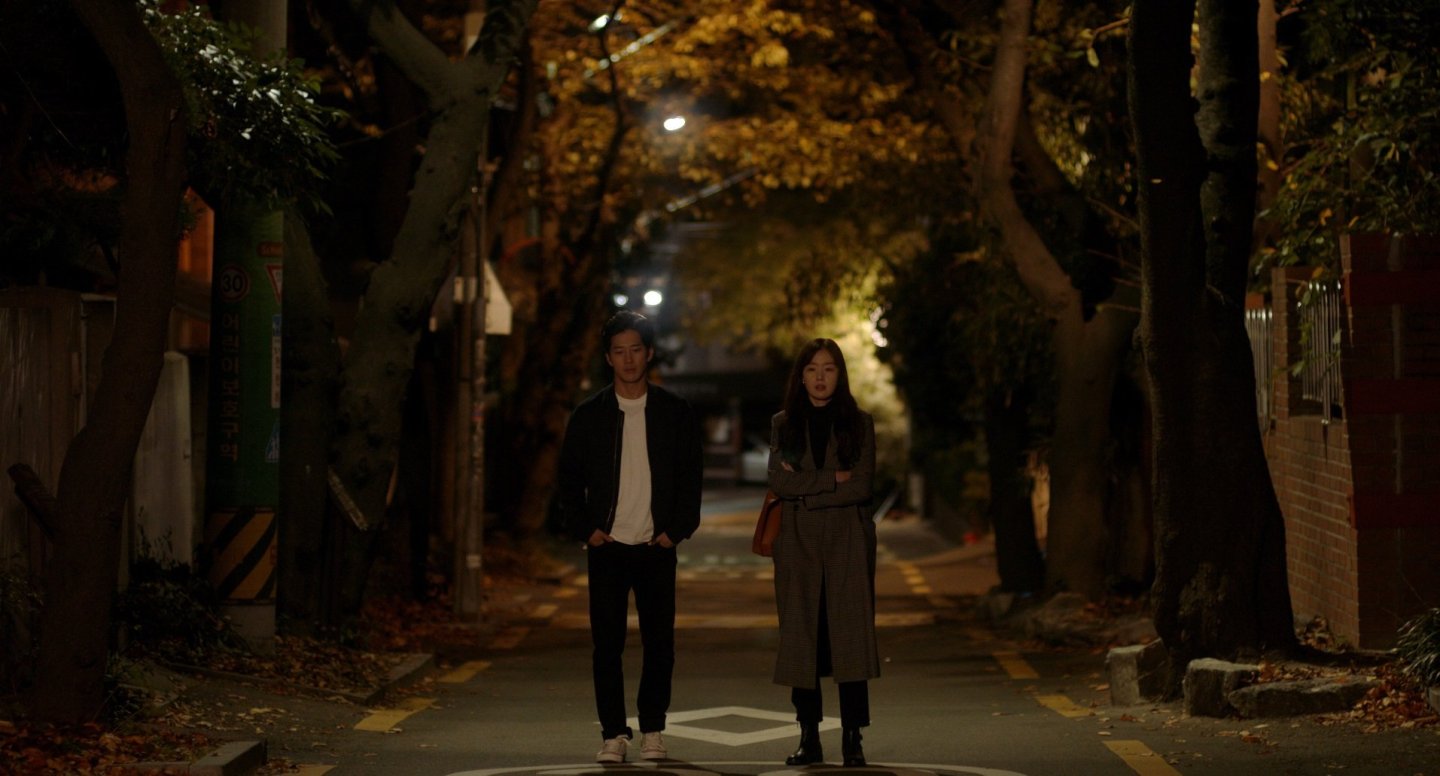 A location scout struggles with memory and landscape when reuniting with a former love in Kim Min-geun’s indie drama, Director’s Intention (영화의 거리, yeonghwaui geoli). The director’s intention is something she’s trying to tease out in trying to find the places that best reflect his feelings, but in doing so she’s also forced to confront herself, her regrets about the past, and her true feelings about her city and her place within it.

Longtime movie-obsessive Sun-hwa (Lee Sun-hwa) has been working as a location scout in her home city of Busan for quite some time and while moderately successful has not yet hit the big time. Her boss is excited to call her back to the city for a big new job he thinks could even lead to some Hollywood connections, but Sun-hwa isn’t sure she wants to take it because the director, Do-young (Lee Wan), turns out to be an old flame who broke her heart by leaving her behind to chase movie success in Seoul.

It’s Sun-hwa’s firm opinion that Busan is as good as anywhere else and that filmmaking shouldn’t be limited to a small elite in the capital. She couldn’t understand why Do-young was so keen to leave and was determined to stay making films with those she loves in a place she loves. She accuses him of selfishness, but it is perhaps on another level simply afraid to leave the security of the familiar for the promise of the new, while he is too quick to abandon the old insisting that there are better opportunities to be had elsewhere. At the end of the day what they have is contradictory perspectives that cause each of them a crisis of faith in the relationship, he because she won’t leave with him and she because he won’t stay. “He cared more about his dreams, I cared more about my life” Sun-hwa later explains, justifying her desire to stay and build something on firmer foundations rather than take a gamble on an unlikely success.

Sun-hwa prides herself on being able to match the emotions from the scene she’s given to a particular place to help the director express his feelings onscreen, but Do-young seems to reject each of her choices simply walking away from each location as in someway unsuitable. She offers him only barbed comments which seem to confuse the other members of the film crew who presumably have no clue what’s going on or of the couple’s former relationship while he says barely anything leaving the question open as to whether he’s here to rekindle an old romance or simply to memorialise it in film. Sun-hwa meanwhile needles him by deliberately selecting painful places filled with their shared memories sure to provoke something if not necessarily the effect Do-young was hoping for. Then again, his key criteria for a pivotal, unwritten scene is that it should look nice but feel empty.

In any case, as Sun-hwa says there are no places you only see in the movies. Every location has its own story to tell, but can also play host to the stories of others. In the opening scenes, Sun-hwa holds a notebook and surveys a river ominously containing abandoned boots and clothing. She is mistaken for a detective by a panicked local who has in a sense created his own story from what he sees only to be relieved on discovering it to be an illusion. No horrific crime has disrupted the tranquility of this peaceful, rural scene. The only thing that matters is that it’s the right place for the right director and perhaps at the right time. Wander around and you might just find what you’re looking for while in having a firm destination you might ending up missing the perfect spot and never reach what you thought you were searching for. Then again, even if a place no longer exists the feelings surrounding it survive and can perhaps be salvaged even if not quite the same as they once were as Sun-hwa discovers in revisiting her past to scout locations that will either bring an old story to an end or begin it anew.

Director’s Intention in Chicago on Sept. 25 as part of the 15th season of Asian Pop-Up Cinema.