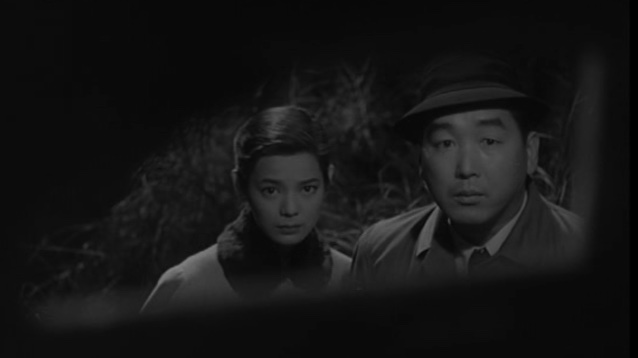 “You’ve become an evil beast that sucks blood!” intones ace detective Kindaichi, though just as his later The Lady Vampire featured no lady vampires, there is no literal bloodsucker involved in Noburu Nakagawa’s Vampire Moth (吸血蛾, Kyuketsuga). Inspired by one of Seishi Yokomizo’s mysteries featuring his iconic detective here played by the rather suave Ryo Ikebe cutting a very noirish figure in contrast to the famously disheveled eccentric from the original novels, the film is for a time at least a werewolf movie though as usual the villain turns out to be post-war greed and amorality.

This is perhaps rammed home in the open sequence as the camera pans around the neon-lit nighttime city before entering a small cabaret bar where a fashion competition is currently in progress. A note of discord is immediately introduced by a white-haired grumpy old man (Eijiro Tono) sitting in the front row who appears to be in an incredibly bad mood, later exclaiming that the winning design by rising star Fumiyo Asaji (Asami Kuji) does not seem very original to him. Some of the models later complain about the strange spectator who’s evidently come to several other shows and has begun to creep them out. Meanwhile, an aloof, conservatively dressed woman brushes past them. Fumiyo’s assistant Toru (Ichiro Arishima) explains that she is Tazuko Kusakata (Chieko Nakakita) who had been the previous number one before Fumiyo returned to Japan after an extended stay in France. The real drama begins however with the arrival of a masked man with a box for Fumiyo who reveals his wolf-like face to Toru in an effort to convince him to deliver it. After opening the box and finding an apple with a few distinctive bite marks on the outside, Fumiyo promptly collapses.

From the introduction of the three loose “suspects” an ominous atmosphere takes hold in the certainty that something untoward is about to happen. Soon enough some of the models start getting bumped off in quite bizarre and unpleasant ways. The first girl’s body is shipped back to the studio in a mannequin box which later leaks blood, while the gang are then delivered a cake with the next victim’s name on it in pretty icing with a butterfly moth motif above. There may not be any vampires, but there are certainly moths. The old creepy guy is revealed to be a moth specialist living a giant gothic mansion with a butterfly room in the middle full of specimens nailed to boards. His front door even has a moth motif above it like a coat of arms, while a butterfly mural lies behind it in the hallway. The killer places a decorative moth on each of his victims to cover their modesty which would seem to indicate the grumpy professor but, once he finally arrives, Kindaichi isn’t quite so sure.

Though this is technically a Kindaichi mystery and he does finally get to unmask the criminal, he is not actually in it very much and as previously mentioned is nothing like later incarnations of the famous detective such as that of Kon Ichikawa’s series of Kindaichi movies released throughout the 1970s. In a common B-movie motif, the main detective work falls to a male and female team in dogged reporter Kawase (Minoru Chiaki) and intrepid model Yumiko (Kyoko Anzai) who eventually succeed in digging up clues at the creepy mansion while simultaneously stumbling across a subplot involving plagiarism in the world of fashion with Tazuko implying that Fumiyo stole her winning outfit from another designer and then passed it off as her own thereby robbing Tazuko of her rightful place as the best designer in Japan. Partly because of all this stress and the vast amounts of money apparently needed to sustain a career in the fashion industry, Fumiyo’s well-meaning boyfriend wants her to abandon the profession but also admits that asking her to give up fashion would be like asking her to give up her life.

Nakagawa ramps up the tension with a series of elegantly presented reversals, making us think we’re witnessing the killer stalking Fumiyo before pulling back to reveal it’s someone else or presenting the same scene of a masked man ominously peering out from behind a tree. The presence of the “wolf man” links back to a Japanese traveller who supposedly fell victim to a supernatural curse in France described as being akin to possession by a fox in Japanese mythology causing the infected person to gain wolf-like characteristics, become violent, and eventually be consumed by an overwhelming desire for human flesh, but perhaps also hints at the sense of voracious greed that has overtaken the killer and caused them to abandon their sense of of humanity in favour of material riches. Filled with a sense of the gothic along with noirish dread in Nakagawa’s foggy, kilted angles eventually giving way to an atmospheric chase sequence strongly recalling that of The Third Man, The Vampire Moth presents a banal evil with palpable anxiety yet suggests justice will be done to those who however briefly stray from the path.