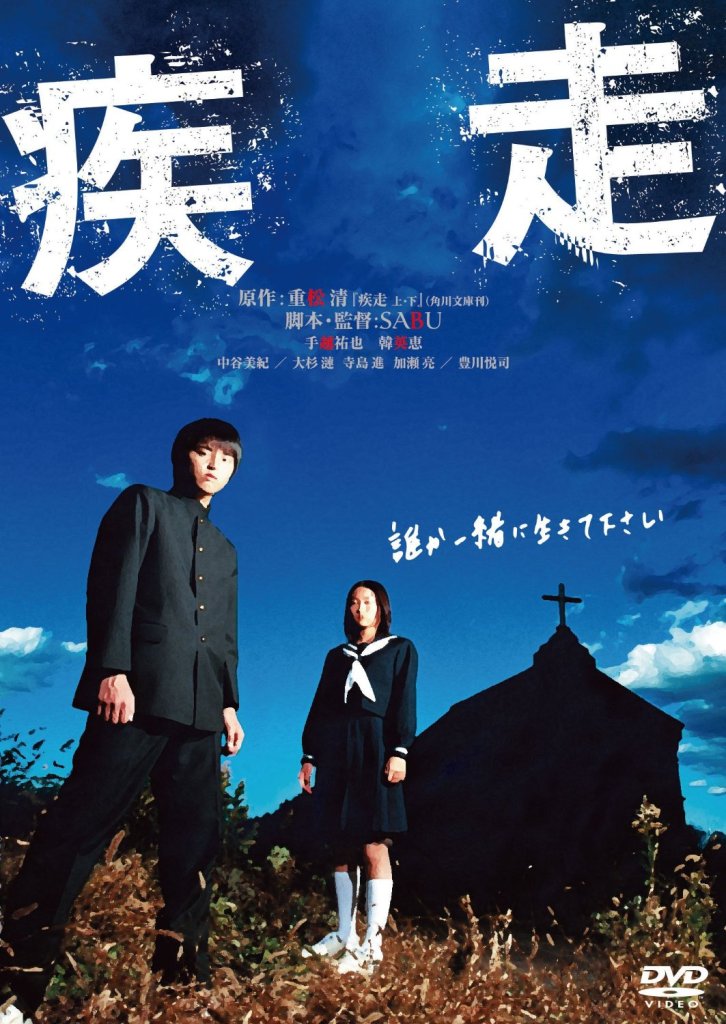 SABU might have gained a reputation for his early work which often featured scenes of characters in rapid flight from one thing or another but Dead Run both embraces and rejects this aspect of his filmmaking as it presents the idea of running and its associated freedom as an unattainable dream. Based on the novel by Kiyoshi Shigematsu, Dead Run (疾走, Shisso) is the tragic story of its innocent hero, Shuji, who sees his world crumble before him only to become the sacrifice which redeems it.

The story begins in a voice over narration offered in the second person by Shuji’s older brother, Shuichi. Shuji, it seems was a curious, if shy, little boy full of the usual childish questions and a curiosity about the way his world works. The boys live with their parents in an area they call “the shore” which is next to a settlement created through reclaimed land which the shore people refer to as “offshore” and somewhat look down on. One day, Shuji gets marooned offshore when his bicycle chain snaps and is rescued by the unlikely saviour of “Demon Ken” (Susumu Terajima) – a local petty gangster whom everyone is afraid of, and his girlfriend, Akane (Miki Nakatani), who is some kind of bar hostess. Soon after, Demon Ken is found buried in a shallow grave dead of a gunshot wound to the stomach, but somehow this improbable act of kindness has stuck in Shuji’s mind.

Moving on a few years, a creepy looking priest moves into the offshore area and opens up a church in a small hut complete with shiny silver crosses. Just like with Demon Ken, there’s a rumour about town that the priest, Father Yuichi (Etsushi Toyokawa), is a former criminal and murderer. Shuji becomes intrigued by the strange figure of the priest and a young girl his age, Eri (Hanae Kan), who likes to spend time in the church. However, more gangsters soon turn up wanting to buy up the offshore area to build an entertainment complex and even though most of the other residents have agreed to be resettled elsewhere, Father Yuichi won’t budge. Akane returns to the area as one of the higher ranking gangsters trying to force the church out and is happy to realise that Shuji, at least, has not forgotten Demon Ken. This won’t be the last time the pair meet again as circumstances conspire against the young boy to drag him ever deeper into the darkness of the shady adult world.

As a young boy, Shuji’s life is the ideal pastoral childhood full of bike rides through green fields and under cloudless blue skies, yet his once happy family dissolves and though he tries to run from his destiny he can not escape it. After his over achieving older brother Shuichi is caught cheating at school and is suspended, he begins to lose his mind becoming obsessed with the idea of the priest as a murderer and is fixated on exposing some dark secret about him. Of course, it turns out not to be exactly as he thought it was and Shuichi becomes increasingly disturbed before becoming a suspect in a series of local crimes which see him sent away to reform school. After this string of tragedies, Shuji’s parents start to fall apart too – his father disappearing and his mother mentally absent. Eventually even Eri leaves as the relocation programme finally kicks in.

Around this point our narrative voice shifts to that of Father Yuichi who becomes Shuji’s only responsible adult figure. However, Father Yuichi’s decision to take Shuji on a trip proves to be a disastrous one as it backfires massively forcing him onto the run and, coincidentally, straight into the arms of Akane. Though Akane had originally seemed an austere and difficult woman, she harbours an affection for Shuji as one of the few people to remember Demon Ken and to remember him for his kindness. Though she wants to help Shuji she ends up pulling him into a the darkness of her own world filled with violence and exploitation. Shuji runs again and eventually makes his way to Tokyo and to Eri who is just as broken as he is but there’s no salvation here either. Even when the pair attempt to travel back to their once idyllic childhood town, their problems follow them and destiny catches up with everyone, in the end.

Early on Father Yuichi and Eri are having a discussion about the difference between fate and karma and which might be more frightening. Eri says fate is better because you can’t change karma but perhaps you can change your fate. The film seems to disagree with her. You can try to run but somehow or other something will always stop you so the cold hand of fate can stretch its icy fingers around your heart. Different in both tone and style from SABU’s previous work, Dead Run is a bleak tale filled with loneliness and melancholy which, though it offers a glimmer of hope for those who are left behind, is not afraid to make a sacrificial lamb of its holy fool of a protagonist.

Based on the book of the same name by Kiyoshi Shigematsu (as yet unavailable in English).