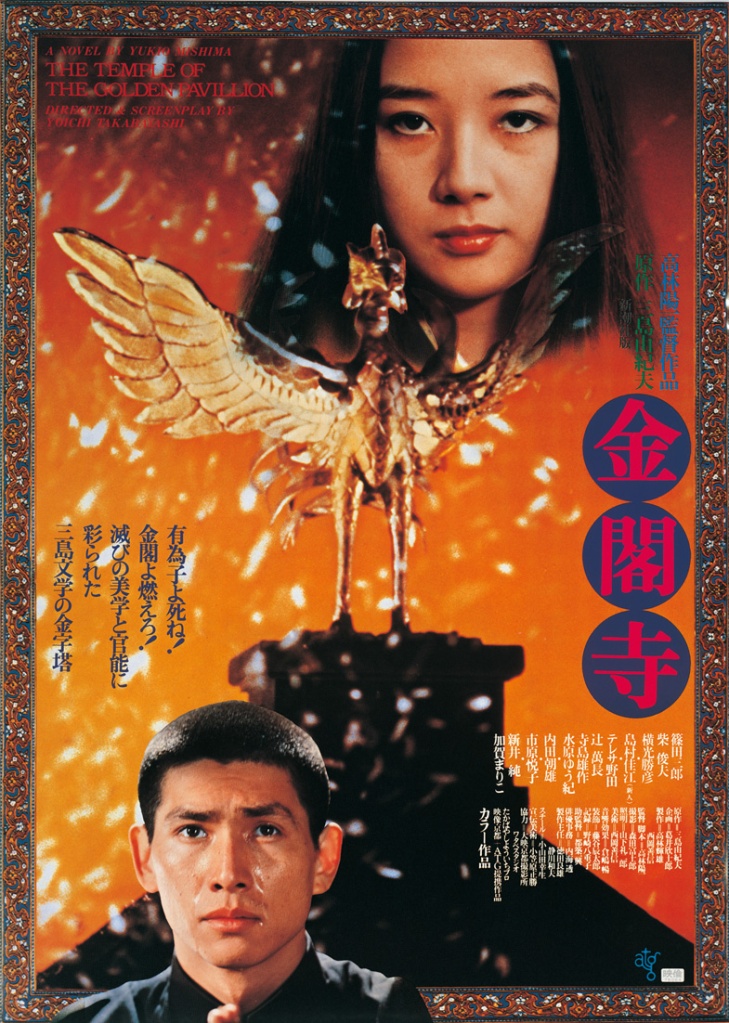 Yukio Mishima’s Temple of the Golden Pavilion has become one of his most representative works and seems to be one of those texts endlessly reinterpreted by each new generation. Previously adapted for the screen by Kon Ichikawa under the title of Enjo in 1958,  Yoichi Takabayashi’s 1976 ATG adaptation Temple of the Golden Pavilion (金閣寺, Kinkakuji) moves away from Ichikawa’s abstract examination of the tragic idealist towards the more heated concerns of the day in its dissection of one man’s continued frustrations and his subsequent literal desire to burn the world.

According to Mizoguchi’s father (Yusaku Terashima), Kinkakuji – the Golden Pavilion, is the purest, most beautiful object the world has ever seen. After his father’s death, Kinkakuji becomes Mizoguchi’s (Saburo Shinoda) touchstone and it’s enough for him simply to be near it. Becoming a monk at a nearby temple, Mizoguchi comes under the care of an older priest who had been a friend of his father’s and is determined to look after his interests.

Interfering with his love for the temple is the spectre of a local girl, Uiko (Yoshie Shimamura), from his home town who spurned his affections due to his ugliness, stammer, and difficulty with communication. Mizoguchi’s resentment grows inside him until he begins to pray for Uiko’s death. Tragically, Uiko is indeed killed by her lover, a deserter from the army, after she first betrayed and then tried to warn him about the encroaching military police. Uiko and Kinkakuji become inextricably linked as each time Mizoguchi finds a woman willing to sleep with him, thoughts of Uiko and the temple cloud his mind, preventing him from fulfilling his sexual desires leading him to become obsessed with the idea of arson. The temple is less something too beautiful for an ugly world, than a too perfect mirror for Mizoguchi’s own faults and inadequacies, a constant reminder of the rest of the world’s baseness to which Mizoguchi would like to drag it down.

Quite clearly mentally disturbed from the outset, Mizoguchi is remains obsessed with the prophecies from his divination sticks and experiences various flashbacks to the often traumatic events of his past, all the while offering glimpses of his strange philosophy through his often poetic voice over. Largely friendless thanks to his unapproachable nature, Mizoguchi bonds with the softening influence of a fellow student at the monastery Tsurukawa (Toshio Shiba), but later falls under the spell of the cynical student Kashiwagi (Katsuhiko Yokomitsu) who uses his own disabilities to manipulate the sympathies of various women in order to sleep with and and then exploit them.

Through Kashiwagi’s tutelage, Mizoguchi begins to have more success with women but his original failure with Uiko and his attachment to the temple prevent him from fully venting his desires. Mizoguchi is also carrying a deeper seated resentment after witnessing his mother having sex with another man, seemingly with his father’s knowledge. Unable to reconcile his sexual desires with his feelings towards women by whom he feels rejected, both by his mother’s betrayal and because of his own internalised consciousness of his lack of looks and strange behaviour, Mizoguchi becomes increasingly frustrated, both sexually and politically.

With the end of the war came a new era, the old gods fell – the Emperor is but a man, but now men rule in this “strange” new democracy. Yet, in real terms, Mizoguchi feels no more empowered than he was before. Trapped inside this closing circle of impotence, Mizoguchi fantasises about murdering his mentor, the temple priest, who has since lost faith in him thanks to his cruel and unthinking behaviour. Killing the priest would change nothing, or so Mizoguchi thinks. The temple is eternal, but if he burns it, does he burn the tyranny of eternity? Calling on the ancestral spirits to destroy this venal world but receiving no reply, Mizogichi invokes Uiko and starts a new revolution born in flames designed to bring power to the powerless, burn the ignorant world away and begin again free of the temple’s tyrannous perfection.

Takabayashi’s approach is a surreal one in which Mizoguchi’s delusions are manefested as reality, climaxing as the creature atop the temple’s ornate apex suddenly begins to beat its wings. Shooting in 4:3 and switching into black and white as Mizoguchi relives painful memories, but remaining in colour for his embellished dreams of them, the atmosphere is an uncertain one which drifts from fantasy to reality without warning. Very much a youth movie of the day, the 1976 The Temple of the Golden Pavillion is less an abstract contemplation of the place of beauty in a world of ugliness, than a story of self destructive male insecurity as sexual and political impotence drive a man to destroy the symbol of his oppression. Dark and cynical as the times which produced it, Takabayashi’s Temple is an ugly tale, but a good lesson in the results of failing to listen to unheard voices.