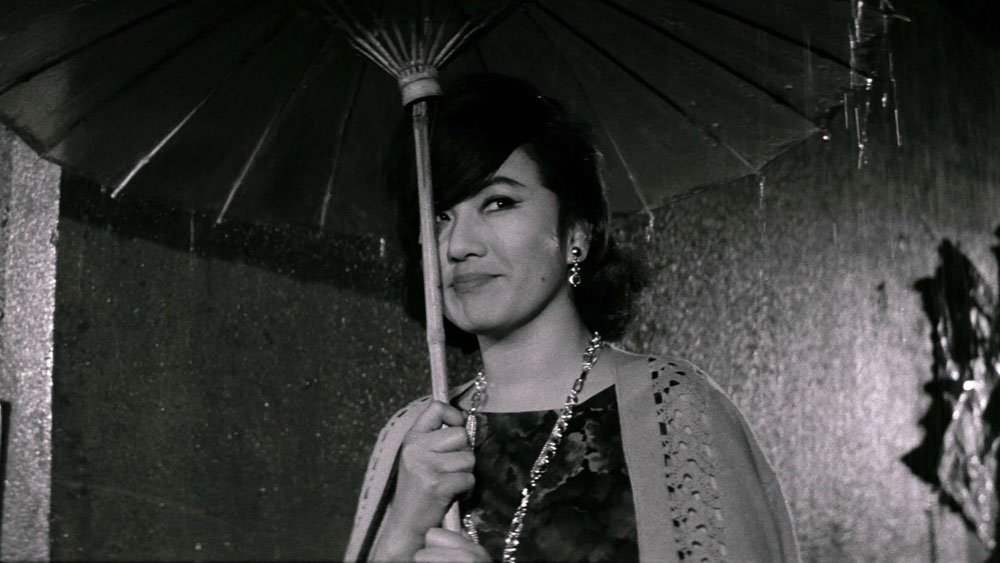 Film noir can be the most contradictory of genres. A moralistic world filled with immortality, fatalism mixed with existential angst, and a rage against society which is always tinged with a resignation to living on its margins. Genre in Korean cinema has always been a little more fluid than elsewhere and Lee Man-hee’s seminal crime thriller Black Hair (검은 머리, Geomeun Meori) is also a melodrama – the story of a self loathing man committed to his own arbitrary codes, and a woman he expects to pay the price for them.

In a brief prologue that has little to do with the ongoing narrative, ruthless gangster Dong-il (Jang Dong-hui) extorts a corrupt CEO by blackmailing him over some illicit smuggling. Meanwhile, across town, the gangster’s wife, Yeon-sil (Moon Jeong-suk), meets with a man, Man-ho (Chae Rang), in a hotel room. She’s come to pay him off, hoping it will be for the last time but Manh-ho, an opium addict, knows he’s onto an endless cash cow and refuses to put an end to their “arrangement”. Sometime ago, Man-ho raped Yeon-sil and has been blackmailing her for money and sexual favours ever since. Yeon-sil threatens to tell her husband and the police and suffer the consequences, but Man-ho knows she won’t. Dong-il’s gang have a strict rule about adultery and if Yeon-sil trusted him enough to believe he would believe her about the rape, she would have told him already.

Another goon hides behind a screen, snapping photos of Yeon-sil and Man-ho which he later passes on to Dong-il. The boss is shocked and shaken. He knows he has to enforce the rules he himself set down for the gang, but he never expected them to cost him his wife. Eventually Dong-il orders an underling to slash Yeon-sil’s face with a broken bottle, after which she is exiled from the gang. Anyone who tries to repair her scars or help her in any other way will be treated as an enemy.

At this point the narrative splits as Yeon-sil is cast down into a sleazy underworld, living with her blackmailer who pimps her out as a common streetwalker and then steals all her money to spend on drugs and booze. She pines for her husband whom she has been prevented from seeing, longing to at least explain why she did what she did and ensure he knows that her heart has always been with him. Dong-il, by contrast, is going to pieces – his gang no longer respect him, he feels guilty about the way he treated his wife, and he has no idea where to go from here.

Unlike other films of the era or film noir in general, Lee’s world view is non-judgemental in its treatment of the respective paths of Yeon-sil and Dong-il. Yeon-sil is left with no choice than to enter into a life of casual prostitution and the film forgives her for this – the fault is that of Dong-il and Man-ho rather than her own. Having been horribly scarred, she wears her hair longer on one side to hide her disfigurement but is constantly reminded of her emotional damage through its physical manifestation and the reactions it often elicits. Picking up a client in the street, she’s threatened with violence and cruel words for having “deceived” him when he catches sight of her disfigured face. A passing taxi driver witnesses the attack and challenges the man so Yeon-sil can escape. The cabbie then hires her and they spend the night together in a nearby brothel. He surprises Yeon-sil by being entirely unfazed about her facial scarring, offering to help her get it treated if that’s what she wants, and making it clear he would like to spend more time with her off the clock.

Yeon-sil’s life is completely controlled by her triangular relationship to the three men – her unforgiving husband Dong-il, the cruel and venal Man-ho, and the good and decent cab driver. After meeting the cabbie, Yeon-sil tries to see Dong-il again but his boys stop her. They say they’ll take her to see him, but really they’re planning quite another destination. Luckily, in a staggering coincidence, they’re spotted by the taxi driver who once again saves Yeon-sil, taking her home to stay with him and proposing they embark on a more formal relationship.

This is more of a problem than it seems for Dong-il’s guys who now fear their boss will find out they tried to kill his wife in an effort to wake him up from his ongoing existential malaise. The rules of the gang are tough and clear – adultery is not permissible, no woman is allowed to leave, no exceptions are to be made. Dong-il, however, is beginning to rethink the code he himself designed. A conversation with his childhood nanny throws up a number of interesting questions. She blames herself for giving Dong-il “evil” milk which has led to his spiritual corruption, though Dong-il later tells Yeon-sil that he did not choose evil so much evil chose him. He created these “evil” gang rules, but failed to live up to them in continuing to feel attached to Yeon-sil – he feels he must punish himself for the “sin” of being unable to forget her and abide by his own honour system which he now feels to be pointless and arbitrary. Effectively issuing himself a death sentence, Dong-il changes tack confirming that he has, in a sense, chosen evil even if it was a “choice” of refusing to resist the path set down for him. Suddenly realising the emotion he felt for Yeon-sil was love, he is struck by a terrible feeling of loneliness.

As in much of Lee’s work, Yeon-sil and Dong-il are trapped by their own society and belief systems and finally perhaps by feeling. Yeong-sil is frequently captured behind bars or caught in a window, imprisoned within the frame as she tries to reconcile herself to her precarious position, daring to hope for a new, decent life with the good hearted taxi driver while also mourning her love for Dong-il and living with the humiliation caused to her by Man-ho. Lee’s structure is sometimes unclear as he introduces a fairly pointless subplot about the taxi driver’s modern woman little sister who has moved out to be independent but works in a hostess bar, inhabiting the same sleazy world as Yeon-sil and Dong-il, only more innocently, but never does much with it beyond contrasting the lives of the two women who occupy slightly different generations and have very different options open to them. There’s a fatalism and inevitability in the way Yeong-sil and Dong-il live their lives to which the taxi driver and his sister do not quite subscribe but Lee breaks with the genre’s trademark pessimism to offer the glimmer of a bittersweet ending and the chance of a new beginning for the much abused Yeon-sil now freed of her dark associations.

Black Hair is the second in The Korean Film Archive’s Lee Man-hee box set which comes with English subtitles on all four films as well as a bilingual booklet. (Not currently available to stream online)