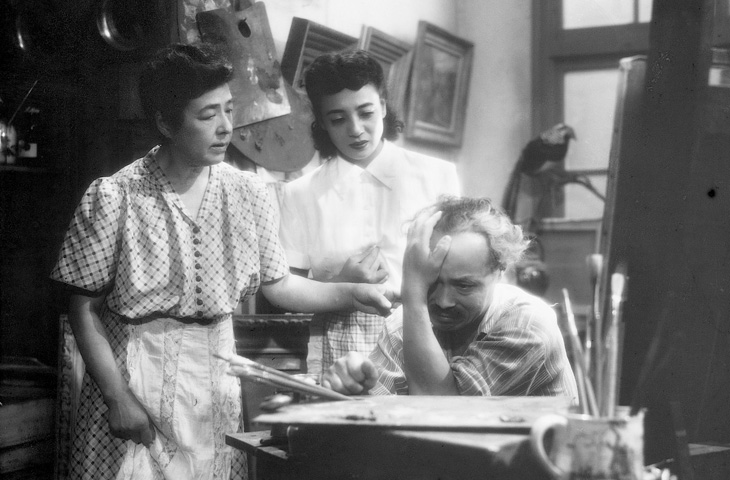 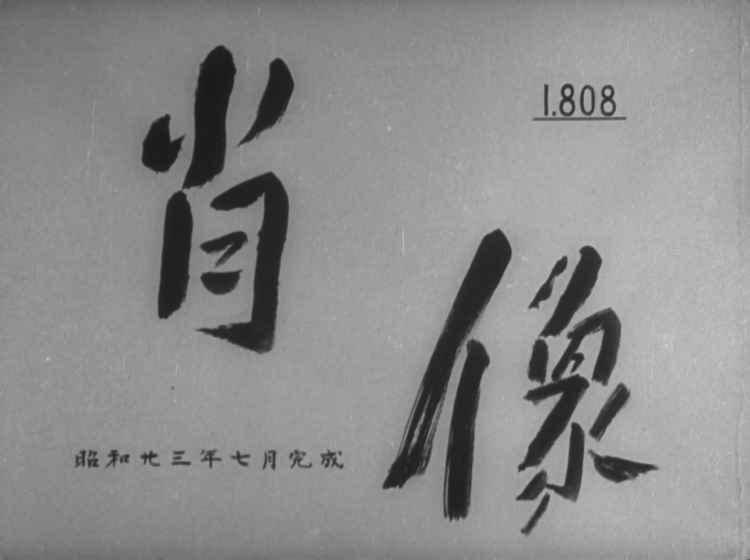 The immediate post-war period was one of fear and hardship. You might survive, but you might not like the person you’ll have to become in order to do so. The (unexpected) heroine of Keisuke Kinoshita’s The Portrait (肖像, Shozo) thought she’d made her peace with her choices, only to be confronted by a vision of her essential self as seen through the eyes of a cheerfully innocent artist. Despite the harshness of the times, there are those who’ve learned to be happy in their lot, but is their talent for happiness inspiration or irritation for those who’ve chosen a different path?

Kinoshita opens with a comic scene in which two shady real estate brokers take a look at a local property. Deciding it’s overpriced and impractical, the pair nevertheless decide to buy it together with the intention of flipping it once they convert the downstairs workspace into more practical living accommodation. There is, however, a slight hitch in that there are sitting tenants – a painter and his family who live in the room upstairs and use the rooms below as a studio. Thinking it will be easy enough to evict them, the men aren’t bothered but the the family are all so relentlessly nice that no one has yet been able to tell them to go. As a last resort, one of the men, Kaneko (Eitaro Ozawa), decides to move into the upstairs with his mistress, Midori (Kuniko Igawa), in the hope that the family will feel so awkward and in the way they will decide to vacate. Innocent and unworldly, the Nomuras all assume Midori is her lover’s daughter rather than his mistress, and start treating her like a well to do young lady. Such sudden and unexpected respect starts to weigh on Midori’s mind as she finds herself playing along, pretending to be “nice” and “respectable” while knowing that the life she’s living is anything but.

The problem is that the Nomuras are so essentially kind and welcoming that they really don’t mind sharing the house. Mr. Nomura (Ichiro Sugai), the middle-aged painter, feels guilty that he doesn’t earn more money and is too poor to move, but he’s also the sort to get over excited about having grown a giant pumpkin that he can’t resist showing to absolutely everyone. As it turns out the Nomuras are also living with a private tragedy – their eldest son Ichiro (Toru Abe) whose wife Kumiko (Kuniko Miyake) and son Koichi also live with the family has not yet returned home from the war and his whereabouts are unknown. Still, they don’t mind talking about it and are as happy as they can be, dancing away under the light of the moon – an unexpected upside to constant power outages. Meanwhile, Kaneko complains loudly as he attempts to finish his accounts in the evening gloom.

Midori half envies, half resents her new neighbours. The longer she lives with the Nomuras the guiltier she starts to feel in deceiving them. Matters begin to come to a head when Mr. Nomura asks permission to paint her portrait. He thinks Midori has a very “interesting” face, in part because he can see a sadness in her eyes that is totally absent in those of his daughter, Yoko (Yoko Katsuragi). Midori agrees and swaps her usual Western attire for the kimono her mother once gave her, but the picture Mr. Nomura paints begins to bother her. The portrait is of a pure young woman, innocent and honest, which is about as far from the way she sees herself as it’s possible to be.

As a friend of Midori’s puts it, you have to survive somehow and Midori thought she’d made her peace with the way she has decided to live but the portrait reminds her that she wasn’t always like this and now she’s not sure which version of herself she ought to despise. She wishes she could paint herself over, but feels her fate is sealed and there’s no way back. Kumiko, a little more worldly wise than her in-laws, is perfectly aware of what’s been going on upstairs but isn’t at all bothered by it. She doesn’t blame Midori for the choices that she’s made and thinks the picture is accurate in capturing her true soul, advising her that it is possible to be that woman again if that’s what she really wants.

The Portrait was scripted by none other than Akira Kurosawa whose belief in the essential goodness of humanity was perhaps not quite as strong as Kinoshita’s but the Nomuras are nevertheless typical Kinoshita heroes and it’s their unguarded warmth and kindness which begins to change the world for those around them. Even the cynical Kaneko is eventually moved by their cheerful selflessness, forced to accept their accidental moral victory rather than continue with his nefarious plan. Midori, forced into a reconsideration of herself, stands in for a generation attempting to make peace with the compromises of the past, learning that they don’t need to define the future and that it isn’t too late to strive for a more authentic life of simple happiness even if you feel you may have already sunk too far.

The Nomuras dancing in the moonlight