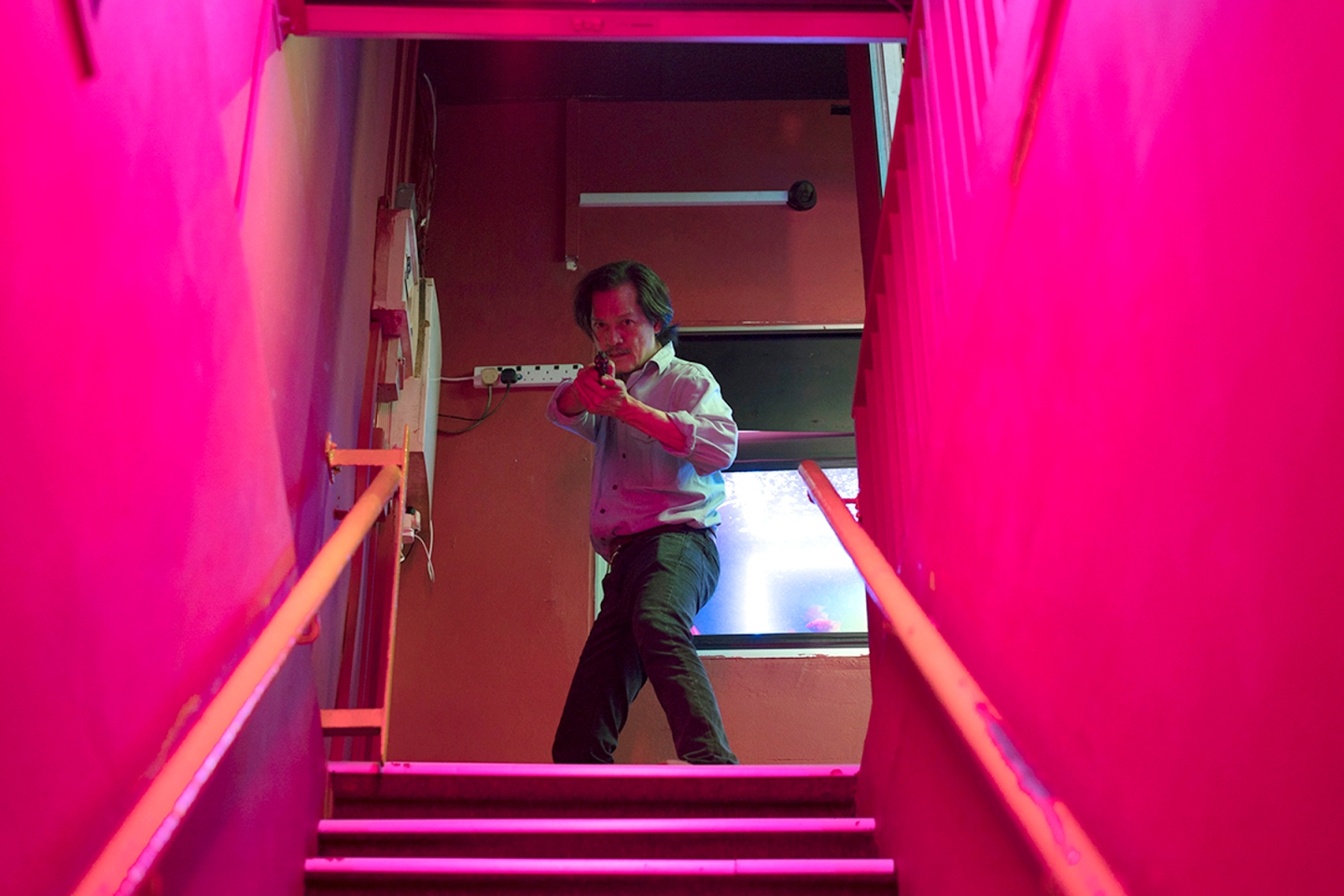 Written by Hayley ScanlonPosted on March 14, 2019Leave a comment

As the world gets bigger and smaller at the same time, it’s as well to be asking on whose labour these new lands are being forged. Yeo Siew Hua’s Locarno Golden Leopard winner A Land Imagined (幻土, Huàn Tǔ) attempts to do just that in digging deep into the reclaimed land that has made the island of Singapore, an economic powerhouse with a poor record in human rights, 22% bigger than it was in 1965. A migrant worker goes missing and no one really cares except for an insomniac policeman who dreams himself into a kind of alternate reality which is both existential nightmare and melancholy meditation on the rampant amorality of modern day capitalism.

Lok (Peter Yu), a hangdog middle-aged detective, is charged with looking for Wang Bi Cheng (Liu Xiaoyi), a missing migrant worker from China. Just who it was that noticed Wang’s absence is only latterly explained and in suitably ambiguous fashion, but the fact remains that there is an empty space where a man named Wang used to be and Lok is the man charged with resolving that space no matter who might or might not be interested. We discover that Wang was injured on the job, almost sacked and then reprieved to drive the workers’ bus where he befriended a worker from Bangladesh, Ajit (Ishtiaque Zico), who later disappeared sending Wang on his own mirrored missing persons case in which he begins to suspect something very bad may have happened to his friend.

Despite his presumably long years on the force and world weary bearing, Lok is refreshingly uncynical for a police detective but apparently extremely naive about the city in which he lives. Stepping into the world of Wang Bi Cheng, he is shocked to discover that people live “like this” – several men crammed into in tiny bed bug infested rooms so brightly lit from outside that it’s difficult to believe that anyone gets any sleep at all. Wang, in any case, like Lok did not sleep and gradually migrated over to the 24hr internet cafe across the way where he developed a fondness for the spiky proprietress, Mindy (Luna Kwok), while repeatedly dying in videogames and being trolled by a mysterious messenger who may or may not have information about his missing friend.

Like Lok, Wang Bi Cheng cannot sleep but lives in a waking dream – one in which he envisages his own absence and the two police detectives who will search for him, not because they care but because it’s their job and they’re good at it. Men like Wang are the invisible, ghostly presence that makes this kind of relentless progress possible yet they are also disposable, fodder for an unscrupulous and uncaring machine. Asked if it’s possible that Wang and his friend Ajit simply left, the foreman’s son Jason (Jack Tan ) answers that it’s not because the company keeps the men’s passports, adding a sheepish “for their own protection, in case they lose them” on realising the various ways he has just incriminated himself.

Yeo opens with a brief and largely unrelated sequence of a young Chinese migrant worker climbing a tower in his bright orange overalls. Later Lok reads a newspaper report about this same man who tried to launch a protest in having been denied his pay and forced to endure dangerous and unethical working conditions. Meanwhile, Mindy the internet cafe girl, is forced to resort to taking money for sex acts in order to make ends meet. Like Wang, she dreams of escape, of the right to simply go somewhere else without the hassle of visas and passports. Wang jokes that the sand that built the reclaimed beach they are sitting on came from Malaysia, and that in a sense they have already crossed borders, offering to take Mindy away from all this (for a moment at least) in his (borrowed) truck but knowing that their escape is only a mental exercise in transcending the futility of their precarious existences.

Indeed, Yeo seems to be saying that Singapore itself is a “land imagined” – constantly creating and recreating itself with repeated images of modernity. One could even read its artificial territorial expansion as reshaping of its mental landscape while all this progress is dependent on the exploitation of wayfarers like Wang and Ajit wooed by the promises of wages higher than in their home countries but left with little protection and entirely at the mercy of their unscrupulous employers. Yet a strange kind of affinity arises between the lost souls of Lok and Wang, united in a common dreamscape born of sleeplessness and lit by the anxious neon of rain-drenched noir as they pursue their parallel quests, looking for each other and themselves but finding only elusive shadows of half-remembered men dreaming themselves out of existential misery.

A Land Imagined screens as part of the eighth season of Chicago’s Asian Pop-Up Cinema on March 20, 7pm at AMC River East 21 where director Yeo Siew Hua will be present for an introduction and Q&A.