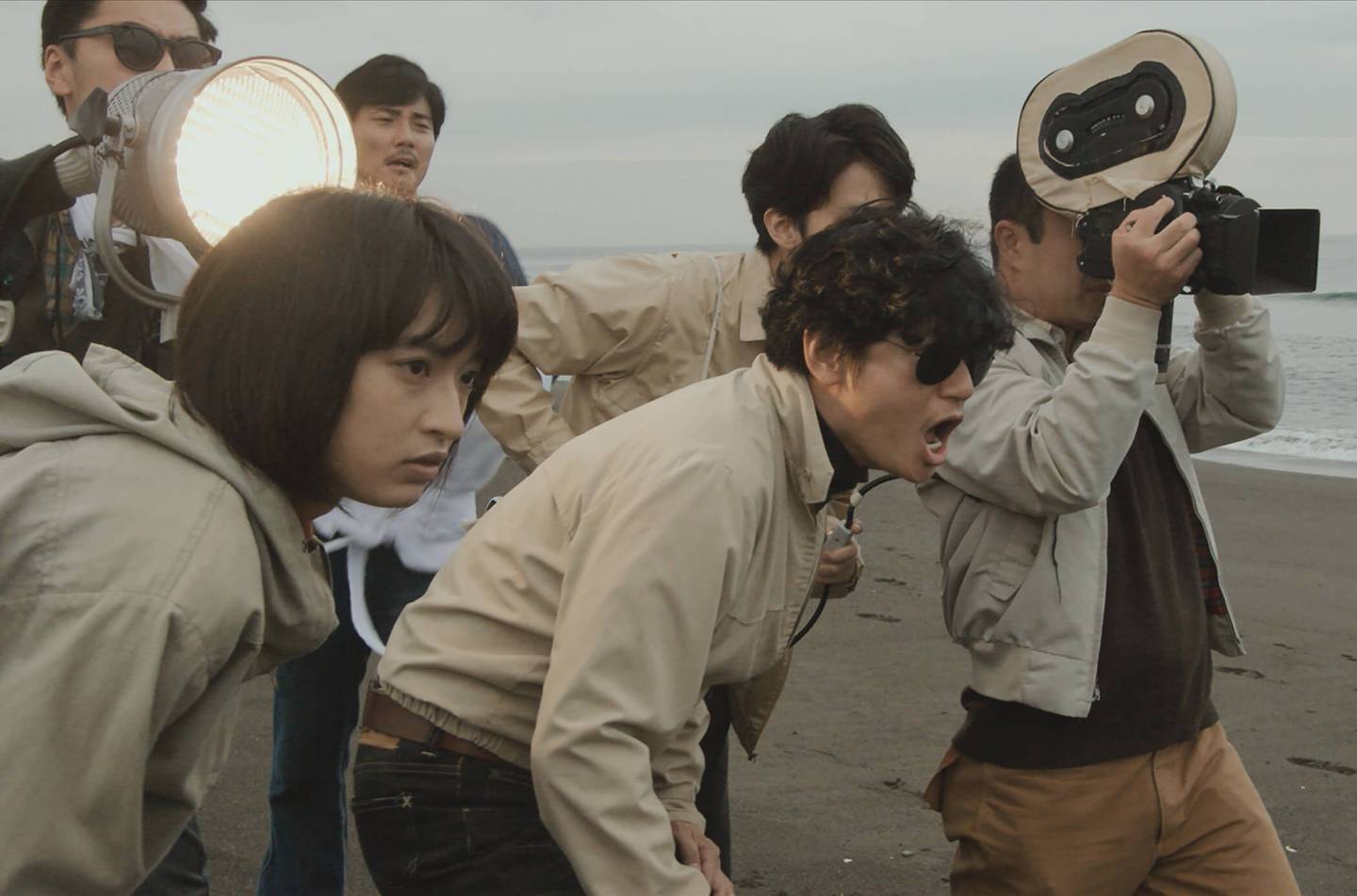 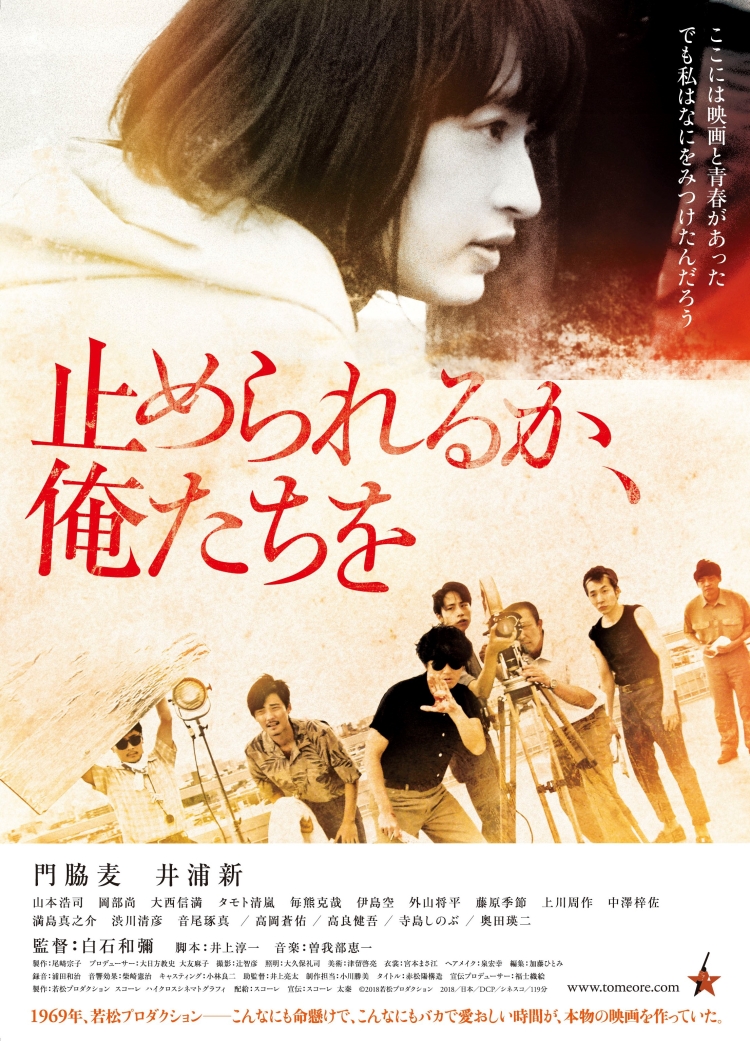 Until his untimely death in a road traffic accident in 2012, Koji Wakamatsu had been the enfant terrible of Japanese cinema. An irascible but somehow much loved figure, Wakamatsu is most closely associated with a series of provocative sex films which mixed politically radical avant-garde aesthetics with pink film exploitation. Kazuya Shiraishi, himself a former Wakamatsu apprentice, takes a look back at the heady years of Japanese indie cinema in the aptly titled Dare to Stop Us (止められるか、俺たちを, Tomerareruka, Oretachi wo) which explores the backstage environment at Wakamatsu Production from 1969 to 1972 (or, right before everything changed with the death of the student movement in Japan following the Asama-sanso incident).

Rather than follow Wakamatsu (Arata Iura) directly, Shiraishi frames his tale around aspiring director Megumi Yoshizumi (Mugi Kadowaki) – the only female presence (besides the actresses) at the otherwise extremely masculine studio which focusses mainly on artistic soft-core pornography. A Shinjuku hippie and self-confessed fan of Wakamatsu, Megumi finds herself joining the team after being recruited to scout potential starlets who could pass for high schoolers. On arrival at the studio, Megumi is quickly mistaken for an actress or mistress but finally manages to win the guys round and is taken on as an assistant director with the possibility of stepping up to the director’s chair if she lasts three years working under Wakamatsu.

As the gruff director warns her, most don’t even last the month. Megumi is however determined, despite Wakamatsu’s continued show of forgetting her name and harsh on-set demeanour. Commiserating with her, another veteran affirms that the big studios wilfully exploit their ADs, at least with Wakamatsu his heart is in the right place even if he’s only a different sort of difficult. He also, however, hands her a bottle of hooch which serves an unfortunate harbinger of things to come as Megumi finds herself playing along with the hard drinking boys club but becoming ever more confused about her role in the organisation and the further direction of her life.

Wakamatsu and his partner Masao Adachi (Hiroshi Yamamoto) vow to make films to shake the world, but are not above commercial concerns which is why they find themselves making pure sex films under pseudonyms to balance the books, much to the chagrin of some of the studio’s more politically engaged members. These are particularly politically engaged times in which the student movement is at its zenith, protesting not only the renewal of the ANPO treaty, but the Vietnam War, and the fiercely contested building of Narita airport. Mostly thanks to Adachi, Wakamatsu Production gradually shifts from indie film company to activist organisation in which political concerns are beginning to take precedence over the business of filmmaking.

The shift leaves those like Megumi who were not so interested in the political dimension floundering along behind and increasingly disillusioned with the world of Wakamatsu Pro. Megumi may admit that she had other problems that probably should have been better addressed, but remains conflicted as to her involvement with the studio. Feeling as if she has nothing in particular to say, she questions her desire to make films at all while clinging fiercely to the surrogate family that has grown up around the strangely fatherly director and continuing to feel insecure in her atypical femininity in a world which more or less requires her to act like a man but doesn’t quite accept her for doing so.

Wakamatsu said he wanted to hold the masses at knifepoint and create a film to blow up the world, but Megumi increasingly feels as if it’s she who will eventually face Wakamatsu with only one of them surviving. Megumi is, in a sense, a victim and encapsulation of her age in which she wanted a little more than it had to give her and found herself increasingly disillusioned with its various betrayals and disappointments. Given the chance to direct a 30-minute short for love hotels, Megumi spins a tale of Urashima Taro which is, as Adachi puts it, all about how she can’t go back to being a hippie after getting mixed up with Wakamatsu and has lost sight of her true self in her quest for acceptance. Both nostalgic look back to a heady era and a tragic tale of that era’s costs, Dare to Stop Us is a fitting tribute to the Wakamatsu legacy which portrays the irascible director as neither saint nor demon but painfully human and infinitely flawed.

Dare to Stop Us was screened as part of the 2019 Udine Far East Film Festival.