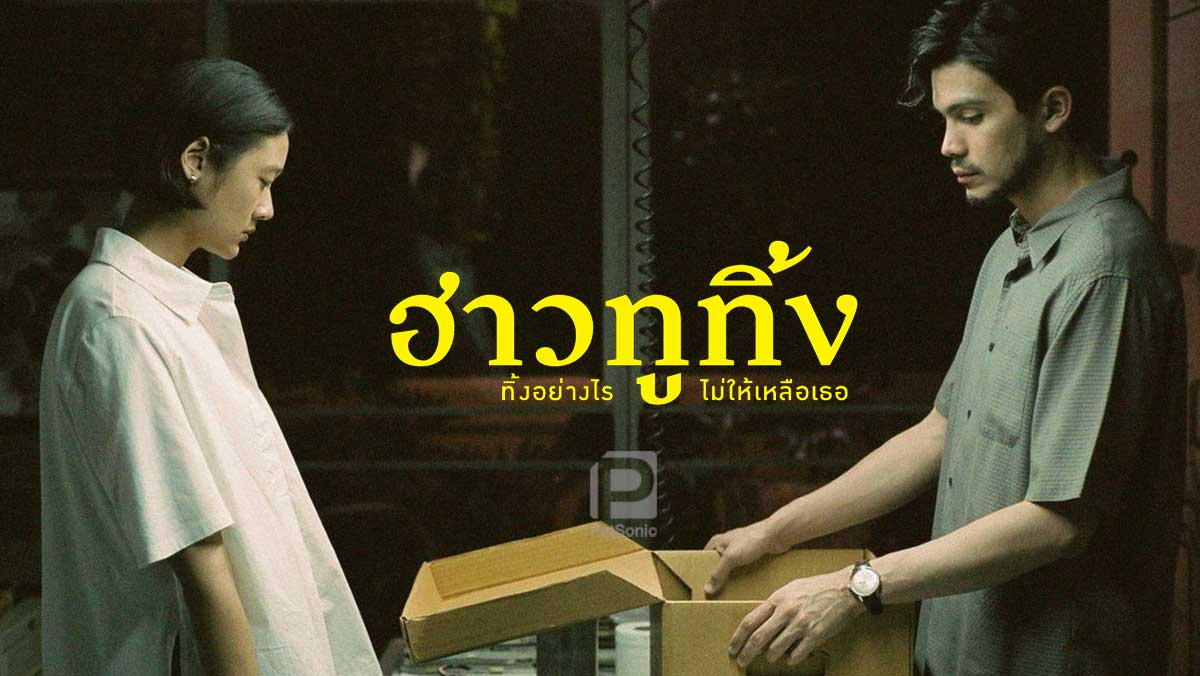 “Some things won’t go away just because you pretend to forget all about it” the heroine of Happy Old Year (ฮาวทูทิ้ง..ทิ้งอย่างไรไม่ให้เหลือเธอ) is reminded by an exasperated friend preparing to forgive her once again for another thoughtless hurt. According to Jean (Chutimon Chuengcharoensukying), “Minimalism is like…a Buddhist philosophy. It’s about letting go”, only her minimalism has been of an emotional kind and in essence the very opposite of letting go. Her approach to life’s many difficulties has been to throw them into a mental black bag, consign them to a black hole of memory, and then simply walk away, but there’s only so much space for delayed trauma and one day you’ll have to start opening some of those bags so that you can finally let go for real.

20-something Jean has been living in Sweden for the past few years and has recently returned to Thailand, more or less against her will. For some reason, she seems to have asserted ownership over her family’s home which once housed her father’s musical instrument repair shop. Without bothering to ask her mother (Apasiri Nitibhon) or brother, Jean has decided to radically redesign the property’s ground floor into an office space, sending her remaining family members upstairs. Talking things over with her old friend Pink (Padcha Kitchaicharoen) who seems to be involved in construction, she wants to get the work started shortly after New Year not least because the new job she’s just been offered wants to make an office visit the following month. They’ve got a scant few weeks to clear 30 years’ worth of clutter so the builders can do their thing.

Jean’s plan is basically to sweep everything into bin bags and dispose of them without giving it too much thought. Coming round to the idea, her brother Jay (Thirawat Ngosawang) starts watching Marie Kondo videos to get into the mood, but “complains” that everything he touches sparks joy. He can’t bring himself to part with the myriad “tacky” souvenirs he’s amassed over a lifetime because it’s the thought that counts and throwing them out is like throwing away kindness. According to Jean, “being emotional only brings trouble”, though she is perhaps a little troubled bagging up an oversize teddy gifted by a friend at graduation with a card that reads “take care of me”. She gets her comeuppance when Pink notices a CD she once gave her with a message inside lying on top of a to go pile and is understandably hurt. To Jean it’s just a meaningless object. No one listens to CDs anymore, but to Pink it doesn’t matter that it was gift from years ago, throwing out the CD is like erasing a moment in time, negating the importance of their teenage friendship.

Pink’s reaction is Jean’s first clue that her wholesale bag and toss philosophy might be problematic. When she finds a scarf she’d knitted for Jay in his to go pile, she gets a taste of her own medicine. Reassessing her possessions, she realises she has more than a few items technically intended for other people that she has selfishly never passed on. Inspired by Pink and in a bid to find some kind of closure, she decides the best thing is to start returning the “borrowed” items to their rightful owners, but quickly discovers that not everyone is thrilled to have the past suddenly presented to them in the form of a random object. An attempt to return a double bass she was supposed to get her dad to repair goes very badly indeed, to the extent that Jean must simply have forgotten or just not realised how badly she had injured her friend.

Emotionally immature, Jean has an almost childlike view of interpersonal relations, firmly believing that just saying sorry will make everything alright again (even you don’t really mean it). Her most difficult task is returning a camera and unused rolls of film to the high school boyfriend (Sunny Suwanmethanont) she dumped by ghosting after going to Sweden. Too cowardly to go in person, she tries mailing it, but when the parcel comes back return to sender she knows she has to try face to face. Aim listens to her heartfelt confession and seemingly forgives her, inviting her inside for tea with his new girlfriend Mi (Arisara Buaprang), but what Jean really wanted was a blazing row so she could expiate her guilt.

Later, a slightly less magnanimous Aim points out that Jean’s quest to prove that she wasn’t selfish person is actually incredibly selfish. What she’s been doing, in essence, is dumping all of her emotional baggage on her friends and then walking away leaving them to deal with it on their own. The apology she made was for herself, not him. If she really cared, she’d have found a way to carry her guilt without burdening others.

Nevertheless, some objects do have presence. “It seemed like an ordinary photo and now it’s priceless” Aim remarks on helping to find one of Jean’s errant objects, the first photo of a couple of high school sweethearts now about to get married. Another photo calls up memories of a supposedly happier time in Jean’s childhood but it’s a memory she can’t bear to keep or delete. While her mother doggedly clings to her father’s piano despite the fact that no one can play it, Jean wants to bulldoze everything, erase their history as a family by replacing their cluttered home with crisp white walls and shiny steel. Only too late may she realise what she’s losing, that with every discarded object a piece of her goes too and soon there may be nothing left at all. Turns out that trying to deal with your abandonment issues by abandoning things isn’t as sound a strategy as it might sound. “This is the era of cloud storage”, Jean points out, but in many ways it’s our orphaned files who make us who we are. Minimalism might be about letting go, but you need to remember to keep hold of yourself in the knowledge that memories don’t belong to you alone but connect you to the world through a thousand shared kindnesses and tiny hurts trapped inside the most banal of objects.