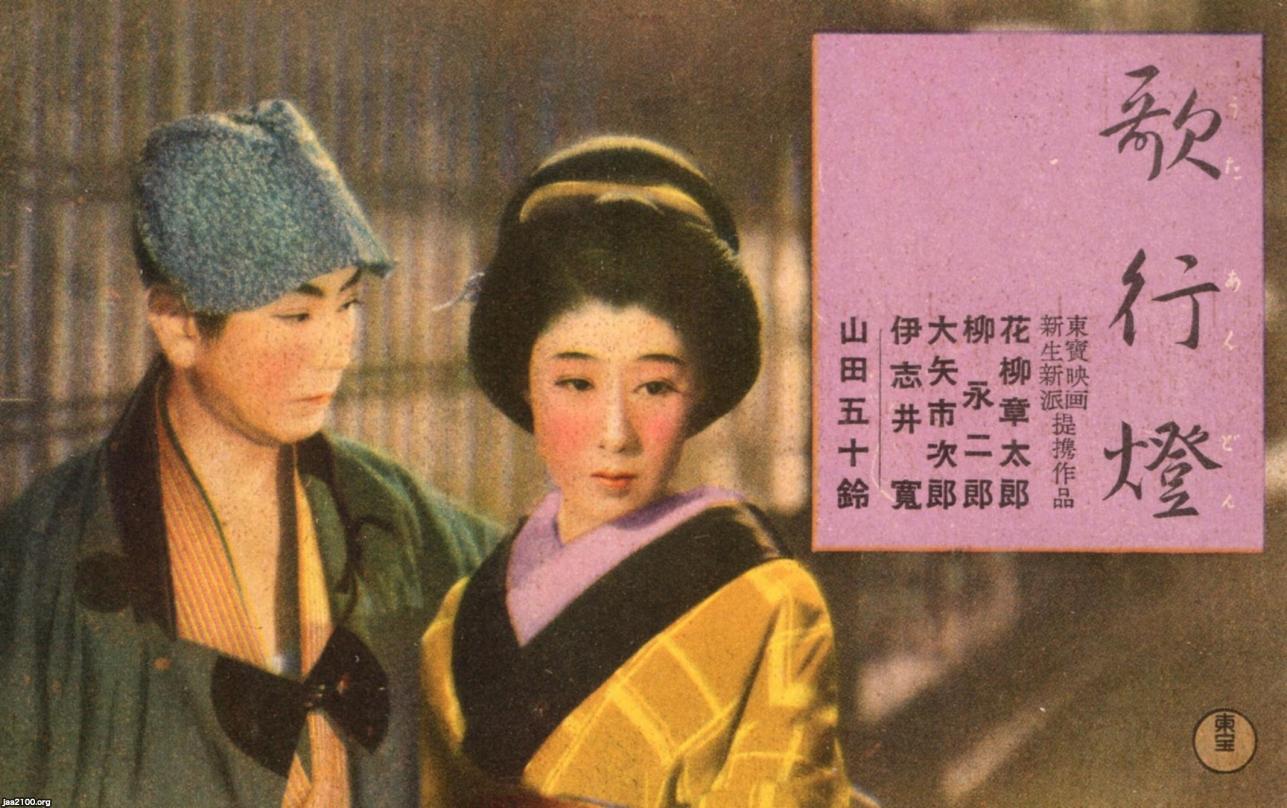 Written by Hayley ScanlonPosted on June 3, 2020

Mikio Naruse famously denounced his wartime films, dissatisfied with himself largely for personal rather than political reasons though among those which survive it is possible to detect a degree of subversion even in his most “national policy” pieces. 1943’s The Song Lantern (歌行燈, Uta-andon) opens with a title card reminding the audience to “support the honour of family and people” and is in part a filial morality tale in which the hero is disowned by his father for his thoughtless haughtiness, though also one which largely manages to skirt its way around the censorship regulations through its historical setting and emphasis on traditional noh theatre.

As the film opens, a troupe of noh players is moving on to its next destination when they are recognised by a man on the train who liked their performance but also claims to have seen better and if they want to account themselves true artists they need to pay a visit to Master Sozan (Masao Murata) who lives in the area they are heading to. Onchi Genzaburo (Ichijiro Oya), the troupe’s leader, takes this with good grace but his son and heir Kitahachi (Shotaro Hanayagi) is extremely offended. Genzaburo had just been talking with his brother about how good Kitahachi’s performance had been and how glad they are that he will be succeeding them, but were careful not to be overheard because they already think Kitahachi is a little full of himself. Still resentful, Kitahachi does indeed decide to pay Sozan a visit without telling his father or revealing his identity having heard from the maid at the inn that Sozan is a blind masseur who also runs a restaurant but she dislikes him because he has three mistresses, something which leaves Kitahachi mildly scandalised.

Kitahachi gets him to sing his signature song but remains unimpressed, eventually slapping his thigh to beat out what is, in his view, the proper rhythm leaving the old man breathless and unable to continue singing. Sozan concludes that his guest must also be a great noh master and begs to hear him sing, but Kitahachi cruelly refuses and leaves in huff, rudely rebuffing Sozan’s daughter Osode (Isuzu Yamada) on the way out in the mistaken belief that she is one of the mistresses. The next morning, however, he is accosted by his father who wants to know if he saw Sozan the night before. He admits that he did but goes no further until he is informed that his stunt left the old man feeling so embarrassed that he took his own life. A group of reporters is outside wanting a statement. Encouraged by an audience who reveal that actually everyone hated Sozan and they’re glad he’s dead so Kitahachi need not fear offending them, he tells all but is disowned by his father who forbids him from singing noh ever again.

So begins Kitahachi’s wandering. The troupe suffers without him, but Genzaburo is unwilling to forgive his son viewing it as bad luck to share a stage with someone who shortened another’s life. As his uncle points out, Kitahachi was raised to be a noh performer and if he can’t perform he has no other way of living. What he resorts to is becoming a street singer, strumming a shamisen and singing popular material. His new occupation provokes another humbling when he’s given a dressing down by a man whose career he has just ruined by shifting into his territory. After hearing him play, Jirozo (Eijiro Yanagi) relents, recognising Kitahachi’s technique as superior and therefore unable to resent him for undercutting his business. Jirozo too is in a similar position, “disowned” by his sister after losing his job as a cook and attempting to earn enough money to go back to his hometown to live right once again.

Kitahachi is incapable of going back because he is still haunted, almost literally, by the figure of Sozan whose ghost he sees during sake-fuelled nightmares. He’s thinking of paying a visit to the old man’s grave to apologise, but gets another idea when Jirozo advises him to try helping Sozan’s daughter whom he, quite coincidentally, met while doing odd jobs and subsequently rescued from being pelted with eggs after being sold off by her wicked stepmother. Learning that Osode was a daughter not a mistress, Kitahachi feels even more guilty, but realises there is something he can do after Jirozo tells him that she is now working at his sister’s geisha house but is entirely incapable of mastering the shamisen. For some reason, however, he doesn’t teach her how to play an instrument, but gives her a crash course in traditional noh dance in only seven days which is not actually all that useful for an aspiring geisha but might at least help her with her determination never to become someone’s mistress.

Kitahachi undergoes several humblings and then finally manages to atone only through becoming a teacher, passing on his art to an amateur. It’s Osode’s skill in learning the dance which eventually paves the way for his forgiveness and a possible return to his previous life while Genzaburo also decides to “adopt” her as a daughter, ensuring she won’t ever have to be a mistress (and will most likely become Kitahachi’s wife). Forgiven by everyone but himself, Kitahachi comes “home”, completing the cycle in regaining his position within the family and the theatre troupe in healing the rifts caused not only by his filial failures but his disrespect of the art in his selfish misuse of it to humiliate a man more like himself than he cared to admit.