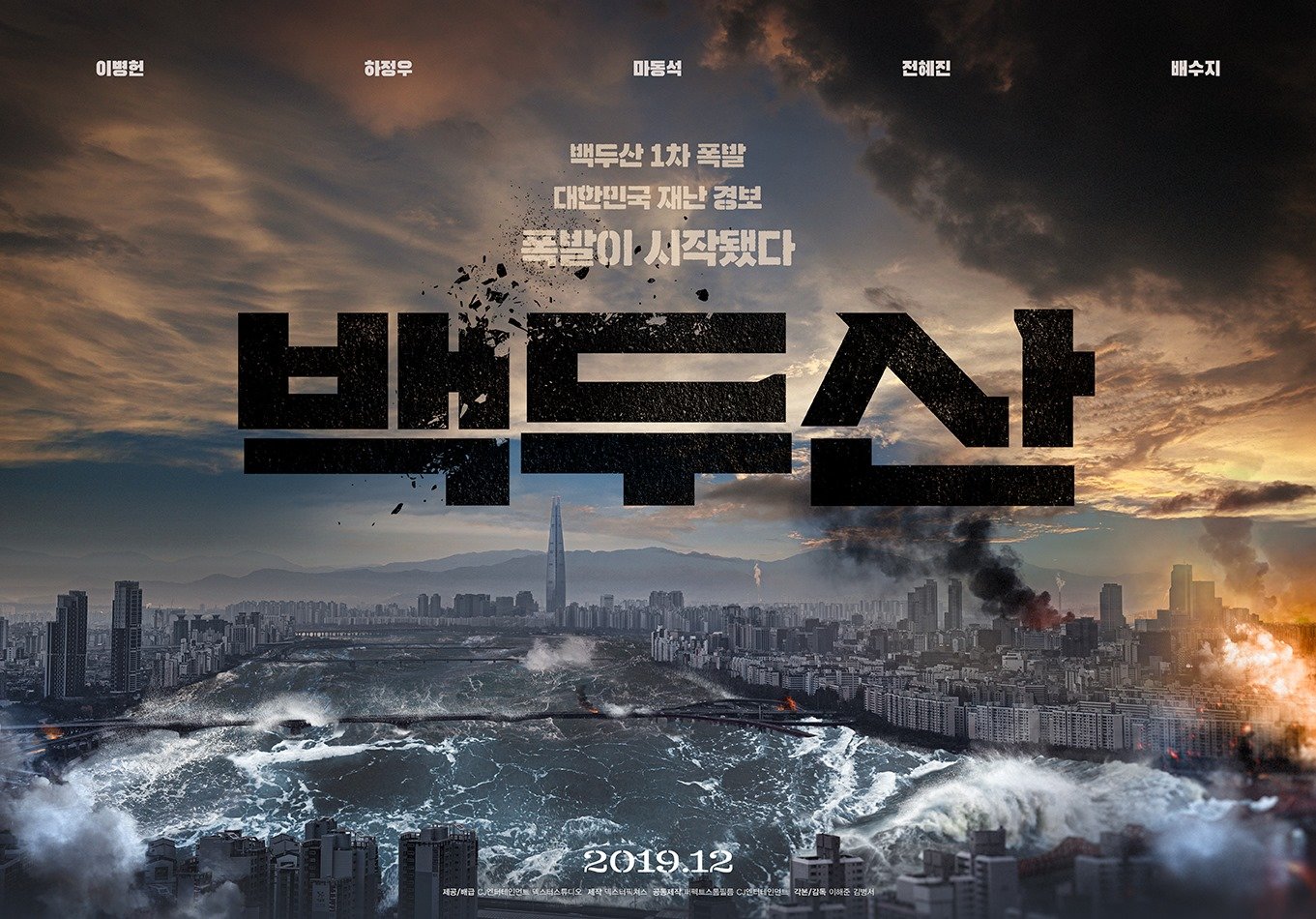 The Korean Peninsula once again faces existential threat though this time of a natural genesis, and ironically the only way to save it might be nukes from the North. Ashfall (백두산, Baekdusan) is the latest and the largest of Korea’s big budget disaster movies featuring a veritable host of A-list talent and action sequences on an epic scale, but also doubles down on the less palatable sides of the genre in an overt and sometimes uncomfortable nationalism which nevertheless has its positive sides in its temporary elision of the North/South divide as the heroes pursue their cross-border mission to save the people of Korea not only from volcanic threat but from becoming mere pawns in geopolitical brinksmanship.

The most obvious problem, however, is that long dormant volcano and pregnant national symbol Mt. Baekdu has erupted, provoking massive earthquakes which quickly reduce most of the high tech capital to mere rubble. This is particularly bad news for heroic army bomb disposal expert Captain Cho (Ha Jung-woo) because, in true disaster movie fashion, today was supposed to be his last day. Cho’s wife (Bae Suzy) is heavily pregnant, and it seems he’s opted for a safer occupation in the light of his impending fatherhood. According to the predictions of previously derided Korean-American scientist “Robert” Kang Bong-rae (Ma Dong-seok, cast brilliantly against type), Mt. Baekdu will continue erupting with the third and most powerful wave taking out most of the peninsula, but he has a plan to stop it. He wants to use nuclear weapons to blow a hole in the side of the chamber, relieving the pressure. To do that, they need to hijack some of the uranium from very recently decommissioned North Korean missiles, which means sending a small military expedition over the border in secret to track down a possible double agent who knows where all the nuclear material is before loading up their own detonators and driving them into a mine under the volcano.

All of this takes place against the backdrop of North Korea’s long awaited denuclearisation which is in the process of being witnessed by American forces who are very much not in favour of Kang’s plan seeing as it effectively means detonating a nuclear bomb right on the Chinese border. Once again, the film suggests, Korea finds itself the battleground in a proxy war, its sovereignty denied as it attempts to use whatever means it has to save itself but is actively prevented by various kinds of outside forces. Kang, who idolises America to the point that he rejects his Korean name and tries to leave the country as soon as possible on his US passport, eventually makes the ironic statement that the ensuing chaos is all down to this “incompetant government that can’t decide its own fate” as the American army shutdown a Korean operation to put his plan in action while Cho and his guys also find themselves actively targeted by US military acting covertly in North Korea.

Somewhat unexpectedly, Cho is not quite the heroic action hero one would expect. He’s anxious and inexperienced, out of his depth as a man unused to being in the field, trained to defuse bombs not launch them and unfamiliar with standard weaponry. Because his guys are the good guys, the North Korean mission is supposed to be “non-lethal”, so they’re wading into this with tasers and rubber bullets while his opposing numbers have no such scruples. Ri (Lee Byung-hun), the North Korean double agent, runs rings around them, playing every advantage while his motives remain unclear until finally sitting comfortably within the realms of action movie melodrama as he and Cho develop an awkward mismatched buddy dynamic, bonding over paternal worries and North/South pop-cultural exchange.

The familiar message is that all things are possible when working together for a common cause, making a possibly subversive argument that North/South solidarity is the most powerful weapon against entrenched American imperialism and a resurgent China while advocating strongly for a greater national sovereignty less beholden to foreign powers for military support. It comes as little surprise that Kang eventually decides to go back to his original name and stay in Korea for good rather than return to a discredited US, having rediscovered his Koreaness thanks to his role in saving the nation. Subtle this is not, but then who ever asked for subtlety from a big budget disaster movie?

Ashfall is available to stream in Europe until July 4 as part of this year’s Udine Far East Film Festival.