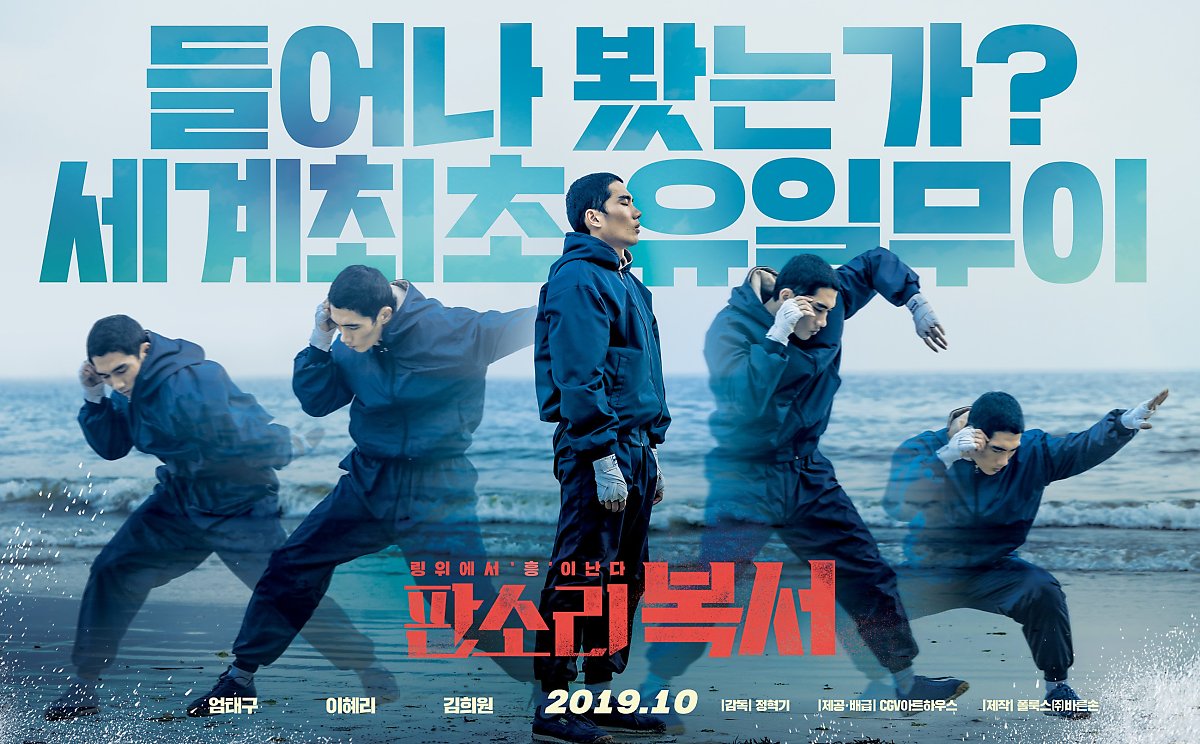 “The most Korean is the most universal” according to the hero of My Punch-Drunk Boxer (판소리 복서, Pansori Boxer) and his childhood best friend as they pursue parallel dreams of Pansori and pugilism which are destined, we come to understand, only for heartbreak and tragedy. Yet, in true Korean sports movie fashion, there’s more than one way to win and the best revenge against cruel fate might indeed be living well because “we only live once we should do what we want or you’ll regret it before you die.”

Byung-gu (Um Tae-goo) was once an aspiring boxer determined to make it to the top, developing his own idiosyncratic style of fighting dubbed “Pansori Boxing” fought in rhythm with the drum beats of traditional folk music as played by his friend Ji-yeon (Lee Seol) who is equally determined to become the world’s best performer of Pansori. These days, however, he works part-time at his old gym doing odd jobs and handing out flyers to try and win more customers. Waking up one day he claims from a “very long and strange dream”, Byung-gu has a sudden urge to take up boxing again, reminding his old coach that George Forman was 45 when he became World Champion so 29 is not to old to give it another go. Director Park (Kim Hee-Won) is unconvinced, partly it seems because Byung-gu has partially forgotten the reasons he was forced to give up his boxing career in the first place which make It unlikely he’ll be able to regain his licence. Meanwhile, in an attempt to increase his chances, he begins coaching a young woman, Min-ji (Hyeri), coaxed into the gym by one of his unconventional ads which promise dramatic weight loss as a result of intensive boxing training.

Boxing is however outdated. As the two young tykes who hang out in the gym point out, they don’t even show boxing on the TV anymore it’s all about MMA. The gym is dying, hardly anyone wants to train and the only other boxer on the books, Gyo-hwa (Choi Joon-young), is continually put out because they’ve yet to arrange any fights for him. “Times have changed” Park is told, eventually agreeing as he contemplates making a sacrifice to make Byung-gu’s dreams come true. But as Byung-gu tells him, “our prime time may be over, but that doesn’t mean that we are”, determined to regain himself in the ring if aware that his gesture is in one sense “meaningless” and soon to be forgotten.

As we soon discover, Byung-gu’s words have an additional meaning beyond simple transience in that he is suffering from “punch-drunk syndrome”, a degenerative condition similar to Alzheimer’s brought on by brain damage sustained by all those blows in the ring. His world is literally disappearing, the photographer’s closing down because no one uses film anymore and, unbeknownst to him, the gym targeted for demolition, yet it’s Byung-gu’s sense of reality that is ultimately crumbling as he looks back on past mistakes and regrets the failure of relationships that were important to him because of his stubborn pride. As Min-ji tells him, however, no matter what it was he did that has a him continually remind her that he’s a “bad person”, his other problem is that he’s too nice, a mild-mannered boxer who won’t fight for himself outside of the ring but is always in everyone else’s corner.

The central irony is that he fights partly for the honour of boxing, an outdated craft, incongruously married to the similarly ‘outdated” art of Pansori which sees him move not only in an unexpected rhythm but incorporating the sweeping moves of traditional dance. As luck would have it, Min-ji is also a Pansori drummer, providing him with a new beat to spur him on to achieve his dreams while Park eventually comes on side in realising that nothing matters so much anymore as making sure Byung-gu gets the opportunity to fulfil himself while he’s still in some way present. Featuring lengthy sequences of Pansori performance singing Byung-gu’s story in traditional recitative as well as off-beat editing to the rhythms of traditional folk music, My Punch-drunk Boxer is a heartfelt ode to giving it everything you’ve got right to the mat but also to forgiveness and redemption as Byung-gu learns to make peace with the past while supporting and being supported by those all around him quietly fighting similar battles of their own.

My Punch-Drunk Boxer streamed as part of this year’s online edition of Fantasia International Film Festival.