The end of high school might signal impending doom for some, but it also provides a valuable opportunity for one last hurrah before surrendering to the demands of the adult world. That’s more or less how the heroes of Satoru Hirohara’s Dawn Wind in My Poncho (ポンチョに夜明けの風はらませて, Poncho ni Yoake no Kaze Haramasete) feel about it as they set off on an impromptu road trip to track down a Peruvian folksinger making his first visit to Japan in 18 years. Youthful irresponsibility and an openness to all things send our boys on a strange odyssey of self discovery in flight of a future that is almost certain to be disappointing.

Right before graduation, Janbo (Yuma Yamoto) and Matahachi (Taiga) are preparing to celebrate their friend Jin (Aoi Nakamura) getting into Uni. Only, Jin didn’t make the grade which has rather put a damper on the occasion. To make matters worse, new driver Matahatchi seems to have scratched the car belonging to Janbo’s dad which they weren’t supposed to be driving in the first place. Trying to fix the problem, they run into dejected idol Ai (Aimi Satsukawa) who dreams of chart success but is being pressured into a gravure career by her agency. Ai manages to upset some delinquents in a convenience store car park, leaving our guys wondering if they should step in but coming to the conclusion it’s not worth it unless the girl is pretty. Nevertheless, they end up driving off with Ai in the back of the car anyway with the delinquents in hot pursuit.

That’s only the beginning of the boys’ adventure, but they can’t go home yet anyway because by the end of the chase they’ve completely destroyed the car and will be extremely dead when Janbo’s dad finds out. Lovingly showing off a picture of his beloved new (secondhand) car, Janbo’s dad tells a young man coming into the bar owned by Matahachi’s single mother that if he works really hard for a very long time, he too could have a car like this. It’s a fairly depressing prospect, but it does seem like there might not be much more out there for these small town guys as they prepare to leave high school behind. Jin was the guys’ bright hope with his university dreams. Janbo is going to work for his dad and Matahachi is looking for a job. All there is to look forward to now is constraint. A boring low pay job with no prospects, followed by marriage, fatherhood, and death.

You can’t blame them for cutting loose, though in essence our guys are mild-mannered sorts well and truly outrun by Ai’s anarchic flight from her own disappointment with her faltering career. Of course, the boys are all interested in her nevertheless only Janbo is facing an embarrassing problem of his own which has him wondering if he’ll ever be able to have a “normal” sex life, marriage, or family. The problem eventually takes him to the “Banana Clinic” which is actually a front very specific sex services but does introduce him to a nice young lady (Junko Abe) who might be able to cure his sense of insecurity if in a roundabout way.

Meanwhile, the guys have blown off the fourth member of their “band” (Shhota Sometani) who is still hanging around waiting for them to turn up for practice ahead of their graduation show. A poignant radio message attached to a song request in which he reveals how lonely he was until some guys invited him to join their band goes unheard by the gang leaving him to gatecrash graduation all alone with an impromptu performance in which he sings about how school was pointless and no one cares about the future, starting a mini riot among the other kids in the process. The trio are still busy with a series of zany adventures as Matahachi tries to convince the guys to come with him on strange quest to hear the elusive folk singer, only latterly explaining to them why exactly this means so much to him. A typically teenage road trip ends up going nowhere in particular, leaving the guys in limbo as they run from their depressing futures towards the last traces freedom far in the distance. Silly, if endearing, Dawn Wind in My Poncho is a strangely sympathetic tale of youthful rebellion towards impending adulthood which ultimately places its faith in the strength of male friendship as the last refuge from a relentlessly conformist society.

Dawn Wind in My Poncho was screened as part of the 2019 Nippon Connection Film Festival. 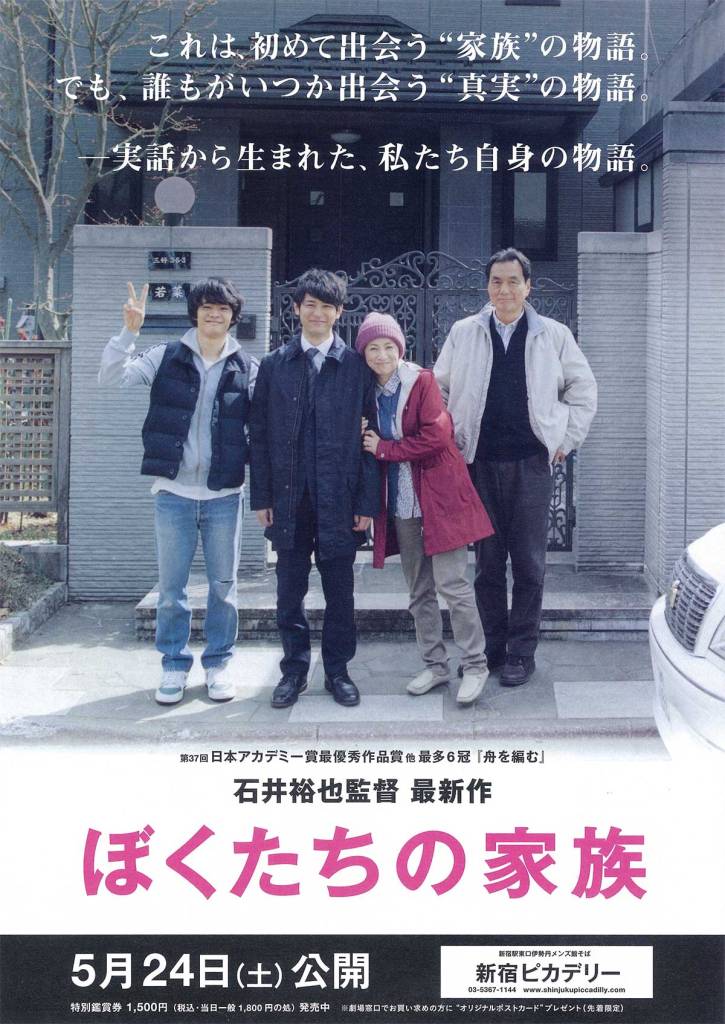 Yuya Ishii’s early work generally took the form of quirky social comedies, but underlying them all was that classic bastion of Japanese cinema, the family drama. If Ishii was in some senses subverting this iconic genre in his youthful exuberance, recent efforts have seen him come around to a more conventional take on the form which is often thought to symbolise his nation’s cinema. In Our Family Ishii is making specific reference to the familial relations of a father and two sons who orbit around the mother but also hints at wider concerns in a state of the nation address as regards the contemporary Japanese family.

Reiko (Mieko Harada) is an ordinary Japanese housewife in late middle age with a husband still working and two grown up children. She’s been worrying lately that she seems to forget things and she also has periodic trances almost like someone pressed the paused button. This all comes to a head when she and her husband Katsuaki attend a family dinner with their in-laws to celebrate the news that their eldest son, Kousuke (Satoshi Tsumabuki), and his wife are expecting their first child. Having behaved quite strangely all night long, Reiko finally ends by repeatedly addressing her daughter in law by the wrong name and muddling up details about the baby. Reiko’s still young but the natural assumption is perhaps that she’s slipping into senility, dementia or possibly even Alzheimer’s but a visit to the doctor turns up something that no one was expecting as they’re eventually made to understand that Reiko may only have a week left to live.

This devastating news of course sends shock waves through each member of the family and not least Kousuke who’s just learned he’s about to become a father. One of the things Reiko was most distressed about was that she’d wake up one day and her family would have fallen apart. It seems she grew up in an unhappy home and was determined not to replicate the experience for her children. Perhaps she did have cause to worry as there were definite cracks in the foundation of this household even before Reiko’s illness in that youngest son Shunpei (Sosuke Ikematsu) seems to have had a strained relationship with both his father and his older brother. In contrast to the other two men, Shunpei, still a student, is much more laid back and easy going though his father perhaps thinks him feckless and irresponsible. He meets his mother sometimes and she lends him money behind the father’s back but they talk more like friends than a mother and son.

Perhaps this division between the men in her life has been playing on Reiko’s mind but there are other problems too. Part of the bubble generation, Reiko and Katsuaki have been living well beyond their means for years and have amassed considerable personal debt. In fact, Katsuaki remortgaged the house a while back and made Kousuke a guarantor on their loan. Their best option would be to file for bankruptcy but doing that would leave Kosuke liable for the return of the mortgage so Katsuaki is reluctant to pursue that option. Now that Reiko’s in hospital money is at the forefront of everyone’s mind as they contemplate paying not only astronomical medical fees but potentially also paying for a funeral too.

This financial strain spills over into Kousuke’s new family as, when talking to his wife about needing to help out his parents, Kousuke discovers that Miyuki is just about as unsupportive as one could be. She brands Kousuke’s parents as irresponsible dreamers still living in the bubble era and suggests their predicament is both their own fault and their responsibility as, at their age, they should have been saving money for just these kinds of situations. Scornfully she insists that she doesn’t want to be “that kind of parent” and retires to bed in outrage. Having also refused to even accompany Kosuke to visit his mother in hospital (seeming to miss the point that he might be looking for her support rather than asking for appearance’s sake), poor Kousuke is left all alone trying to deal with the impending birth of his child and death of his mother all in a few short weeks.

The crisis does, at least, bring the three men a little closer together as it requires a kind of unilateral action that pushes previous resentments and ill feeling into the background. Reiko’s condition also means that she says some things that she would never have revealed directly to her family which both hint at some of her suffering over the last thirty years but also the deep love she has for her them. Katsuaki is revealed as a fairly ineffectual man who cares deeply but is blindsided by his wife’s condition and unable to face the facts leaving the bulk of responsibility to his oldest son. This kind of family abnegation is anathema in Japan – one would never want to be a burden to one’s children but Katsuaki is now both financially and morally dependent on Kousuke. Kousuke himself is not quite mature enough for this level of responsibility despite his impending fatherhood and his younger brother Shunpei may appear indifferent to everything but is merely putting a brave face on things though he may be the most dependable (and emotionally intelligent) of the three.

By the end, there is a glimmer of hope. The family can be repaired if you’re willing to work at it which means being willing to face the problems together and without any secrecy. Everyone, including the older generation, has in some senses “grown up”, facing the future together having accepted themselves and each other for who they are. Like applying a touch of kintsugi, their glittering wounds have only made them stronger and made each refocus on what’s really important. Neatly moving into a more dramatic arena, Ishii proves he’s still among Japan’s most promising young directors able to marry an idiosyncratic indie spirit with a more mainstream mentality.