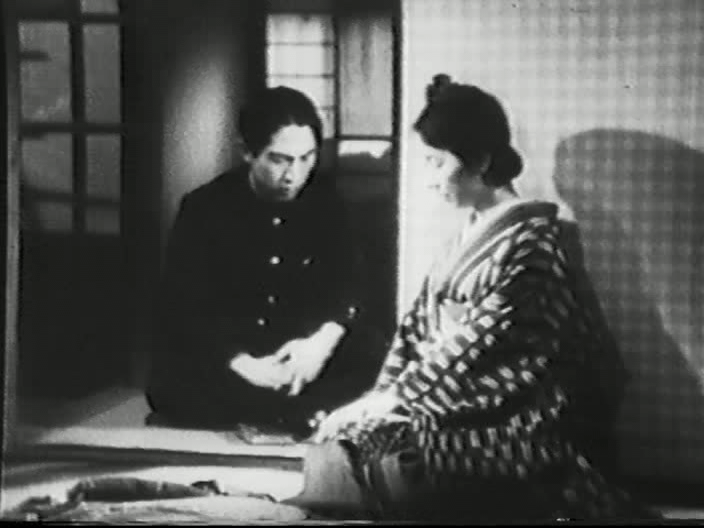 The 1930s are often thought of as an era of social rigidity and implacable conservatism, yet even before the war things were changing. The young wanted something different than their parents often had and dared to dream of getting it even if their hopes were often dashed by the times in which they lived. Heinosuke Gosho’s Woman of the Mist (朧夜の女, Oboroyo no Onna) is the story of two youngsters who find themselves in a difficult situation and are offered a solution by elders acting kindness which they are persuaded to take only to find themselves progressively more miserable, burdened by the weight of the sacrifice their society has asked them to make.

Set in the jovial working class world of Shitamachi, Woman of the Mist opens with the hero of the tale, Fumikichi (Takeshi Sakamoto), enjoying a historical lecture regarding Edo era sacrifice for the common good during which his wife, Okiyo (Mitsuko Yoshikawa), comes to fetch him. Members of a local association he belongs to have come looking for him, it turns out for a favour. They want him to assist with some fundraising for a stone lantern to mark the association’s anniversary. Much to his wife’s exasperation, Fumikichi is only too happy to comply. It might seem that Fumikichi is a much respected pillar of the community only it is also true enough that he basks in the flattery of being regarded as someone to be depended upon and is therefore a soft touch (something undoubtedly well known to all around him).

Nevertheless, despite his slight tendency towards narcissistic attention seeking, Fumikichi is a salt of the earth type and willing to help those who need it for largely altruistic reasons. He therefore finds himself a surrogate father (though childless himself) to the son of his widowed sister Otoku (Choko Iida) who enlists him to talk some sense into his law student nephew, Seiichi (Shin Tokudaiji), who has apparently been “disrespecting” his mother and neglecting his studies by reading too many novels. Fumikichi has a word but counsels Seiichi that there’s nothing wrong with reading novels save that it obviously upsets his mum who has worked herself to the bone for the last 20 years dreaming of the day Seiichi becomes a fully fledged lawyer, which is to say a member of the middle classes.

Fumikichi, as he often will, becomes the conciliatory voice at the centre of generational conflict. Seiichi is a young man at the crossroads of life and finds himself torn between youthful idealism and a duty towards his family. He has become disillusioned with the law and would rather transfer to literature, secure in the knowledge that only in novels can you find the truly humane. Fumikichi is careful not to patronise but gives him a knowing look, realising that his confusion is partly born of resentment towards his well meaning yet accidentally possessive mother who has railroaded him into a career he doesn’t want to buy him a future which is her only dream. What he wants is control over his life, but when it comes to it he is still a boy and woefully unprepared for the demands of adulthood.

This becomes obvious when he falls in love and gets his girlfriend into trouble. Teruko (Toshiko Iizuka), a former geisha apparently known to Fumikichi in his younger days now working as a bar hostess, is not exactly the kind of wife his mother might have had in mind. The pair are careful to keep their relationship a secret for just this reason as Seiichi remains conflicted – one moment declaring that he no longer cares if everyone finds out and lying to his mother about her the next. Pregnancy forces the issue. Teruko, mindful of Seiichi’s bright future, declares that she can raise the child alone, glancing sadly at a picture of herself in her former life as a sex worker as if accepting what future sacrifices might be expected of her while half hoping Seiichi will rush forward to save her from such a fate. Seiichi doesn’t exactly rush but does tentatively accept his responsibility in reassuring her that he will soon come of age and is ready to become a father with all of the joys and obligations that entails.

Lost he turns to Fumikichi who hatches a plan which might be accounted a neat solution but is also another instance of the older generation making decisions on behalf of the young without really asking them. Despite being a rather feckless old man, Fumikichi tells his wife the child is his and asks for her forgiveness while also suggesting that they adopt the baby as their own. As expected, Okiyo is not exactly enthused but as Fumikichi calculated she would eventually comes around, ironically enough after a conversation with Otoku who has no idea the baby is really her grandchild. Once the decision is made, everyone rallies round to look after Teruko who finally becomes a (temporary) member of Seiichi’s family even whilst barred from ever becoming his wife and in fact of ever seeing him again as a result of the bargain which has been struck by Fumikichi. Nevertheless, Seiichi vacillates and attempts to change his mind by asking Teruko to marry him only for her to urge him to study hard and live well, sacrificing her happiness for his future.

Uncomfortably enough, it is Teruko who must pay for a series of transgressions against the norms of her society – for being a young woman with a past who seduced a nervous young man and dared to dream of a happier future with a person of her own choosing, though the very fact of her suffering is in itself an attack on these rigid and unfair social codes which do their best to destroy the happiness of ordinary, basically good people who have done nothing wrong other than attempt to live their lives. Fumikichi and his wife are doing their best and they too are good, compassionate people who have made good compassionate choices hoping for the best in a difficult situation even if their choices are defined by the prevailing conservative morality which places Seiichi’s future above a young woman’s life and love.

Then again, Fumikichi’s objections are largely practical – it’s hard to keep a family with no money coming in and Seiichi is still a student with no prospect of immediate employment that would pay enough for a wife and child. Could they be happy after a shotgun wedding and years of penury? Seiichi’s diffidence hints at no, but Teruko’s “purity” hints at yes as she vows to make the kind of sacrifice that proves her “goodness”. The youngsters find themselves beholden to the demands of their elders, torn between their personal desires and duties to those they love. Whatever they do, they lose and are destined to remain unhappy, unable to seize their individual chance of happiness in an oppressive, conformist society. Gosho may leave them at the mercy of such a system, but he does so with immense sympathy and not a little anger as we watch these good people making the best of things while asking ourselves if all of this is really for the best.