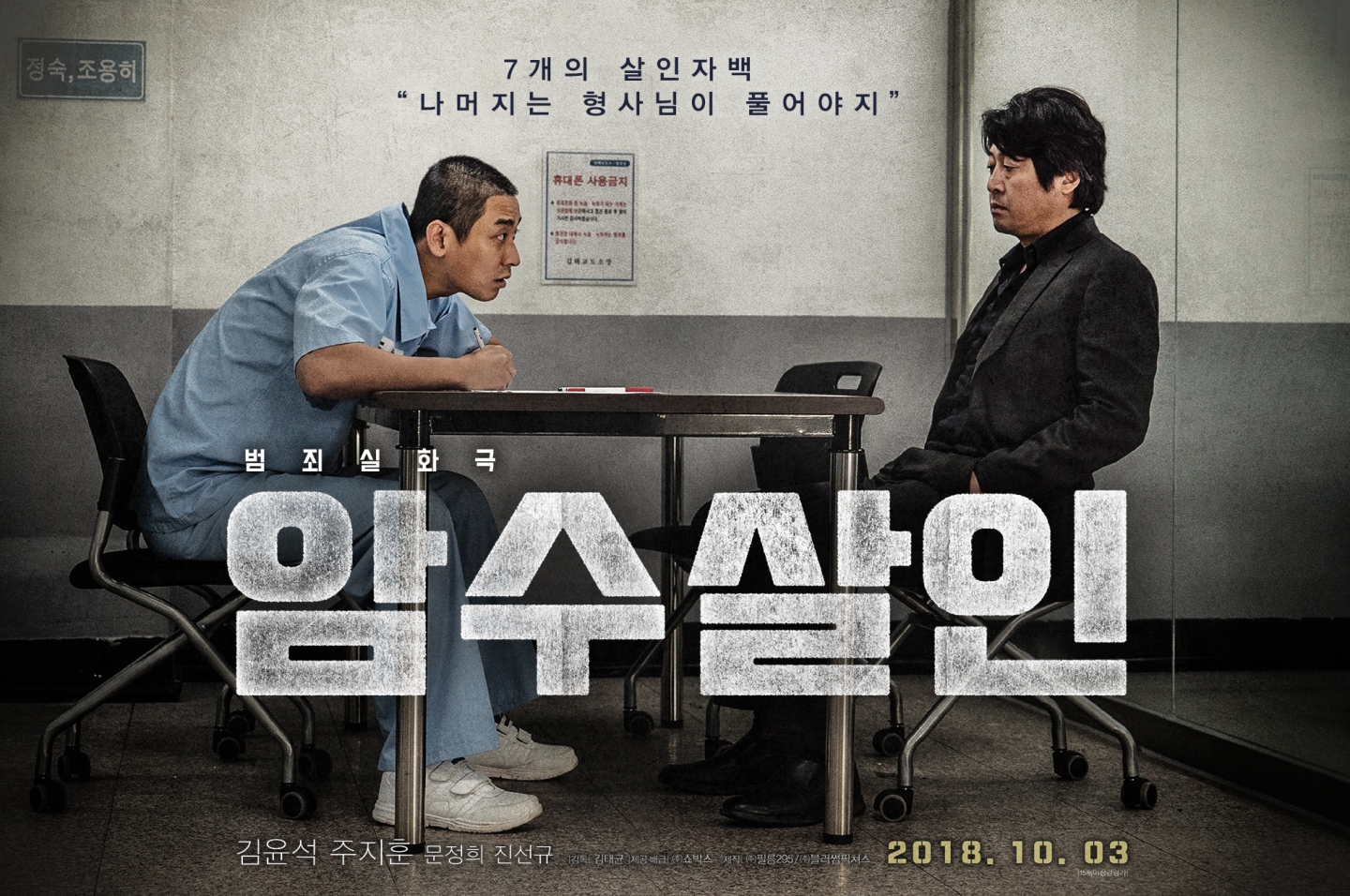 No matter how accurate statistics relating to criminal activity might be, there are many more acts of violence and immorality which, for various reasons, will go unreported. Criminologists refer to this phenomenon as the “Dark Figure of Crime”. Kim Tae-kyun’s cerebral thriller takes the strangely poetic term as its title (암수살인, Amsusalin) and does indeed revolve around the perfect murder and a man who claims to have completed six of them before abandoning his system and getting himself caught. Yet unlike many cops and robber dramas, Dark Figure of Crime is not about the killer but about the hidden victims who’ve lived a life haunted by the horrible uncertainty of whether their loved ones abandoned them but are alive and well somewhere else, or have fallen victim to some terrible event.

Narcotics officer Kim Hyung-min’s (Kim Yoon-seok) introduction to a new source of information takes a turn for the unexpected when he first starts telling him about having disposed of a body some years ago and then is promptly arrested by Homicide for the murder of his girlfriend. Tae-oh (Ju Ji-hoon) is convicted and sent to prison, but calls Hyung-min and complains that the police framed him when they didn’t need to. Tae-ho murdered his former girlfriend alright, but the evidence the police submitted was faked which has annoyed him. He draws Hyung-min a map to where he buried the “real” evidence just so he can catch the police out acting improperly and embarrass them as well as earn Hyung-min’s trust for the next part of his plan, which is vaguely confessing to another six murders. Hyung-min can’t know if Tae-oh is on the level or just messing with his head but feels as if he has to investigate all the same.

Not everyone understands Hyung-min’s commitment to this strange series of cold cases. After getting himself a transfer to Homicide, Hyung-min’s new boss warns him about another officer who was tricked by a bored felon and ended up losing everything – once a promising policeman he’s now a divorced carpark attendant. A meeting with the former officer yields another warning – men like Tae-ho know the law and they play with it. He’ll get you to investigate crimes B and C for which he knows there won’t be enough evidence, then he’ll use his acquittals to cast doubt on his original conviction. Hyung-min is wary but also hooked. He knows Tae-ho is playing him, but thinks he can win by giving him the opportunity to slip-up and give something away he didn’t quite mean to.

Tae-ho is certainly a dangerous, unhinged young man no matter how much of what he says is actually true. Hyung-min can’t know if any of this is real or just a bizarre game Tae-ho has cooked up because he’s got 15 years and no one ever visits him, but then he starts turning up suspicious absences. As he tells him in a tense conversation late in the game, none of this is really about Tae-ho. Hyung-min couldn’t care less about his big man act and is not impressed by his “crimes” or the ways in which he got away with them though he does want to make sure he never gets out to hurt anyone else. What Hyung-min cares about is the victims whose family members are living with the unresolved trauma of not knowing what happened to their loved ones. Something Tae-ho could quite easily help with if he had a mind to, but seeing as Tae-ho only wants to play games Hyung-min will have to find out on his own, and he will stop at nothing to do so even if he ends up manning a rundown police box in the middle of nowhere for his pains.

Living with a trauma of his own, not even Hyung-min has much faith in the police hence why he needs to complete this case himself – he simply doesn’t believe anyone else will bother. Police in Korean films are universally bumbling and incompetent if not actually corrupt and selfish. Hyung-min is an exception though his opinion of his profession may not be much different to the stereotypes you see in the movies. He doesn’t care about getting a big promotion or being the guy who catches the big fish, he just wants the truth to be known and the past laid to rest so the indirect victims can begin to move on with their lives. The “dark figure of crime” refers not only to the hidden and unresolved, but to the oppressive spectre cast over those left behind with only pain and worry. The terrifying thing is, there may be countless other dangerous people out there whose crimes go undetected not because they’re criminal geniuses but because no one really cares enough to stop them. Subtly subverting serial killer movie norms, Kim pulls the focus from the self-aggrandising villain to remind us of the very real costs of his actions while making a hero of the dogged policeman who refuses to to give in to a societal expectation of indifference.

Screened as part of the 2018 London East Asia Film Festival.

Follow Windows on Worlds on WordPress.com
Join 328 other followers