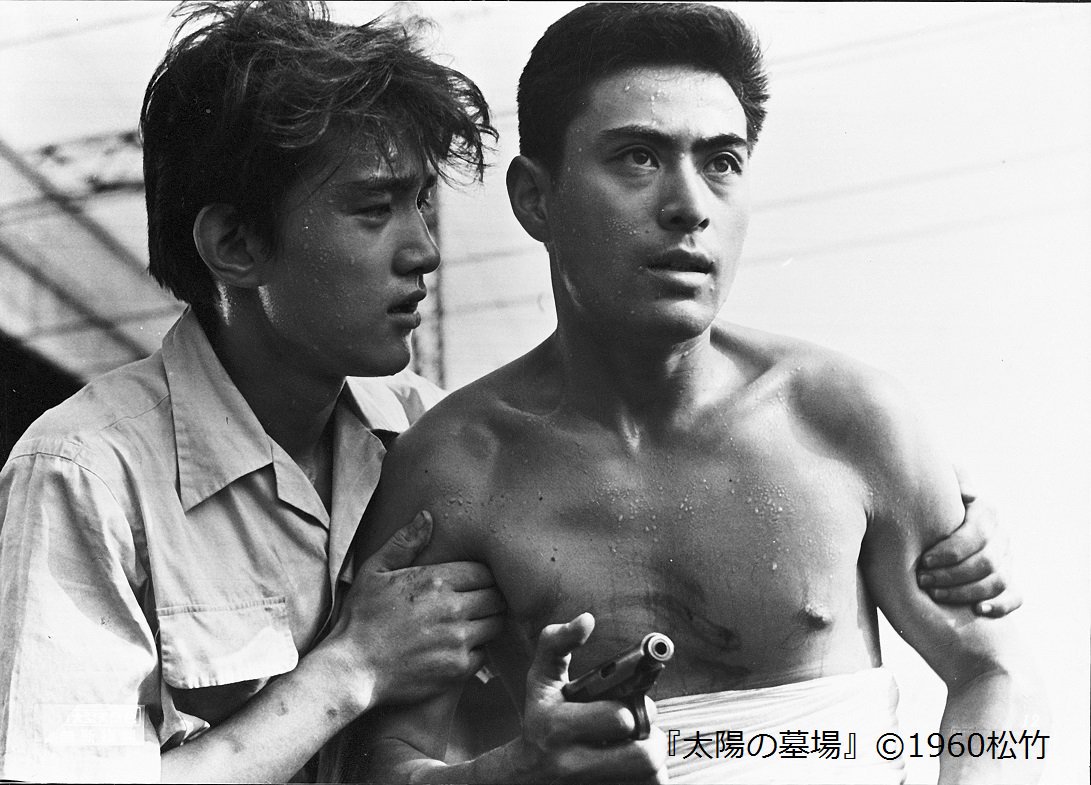 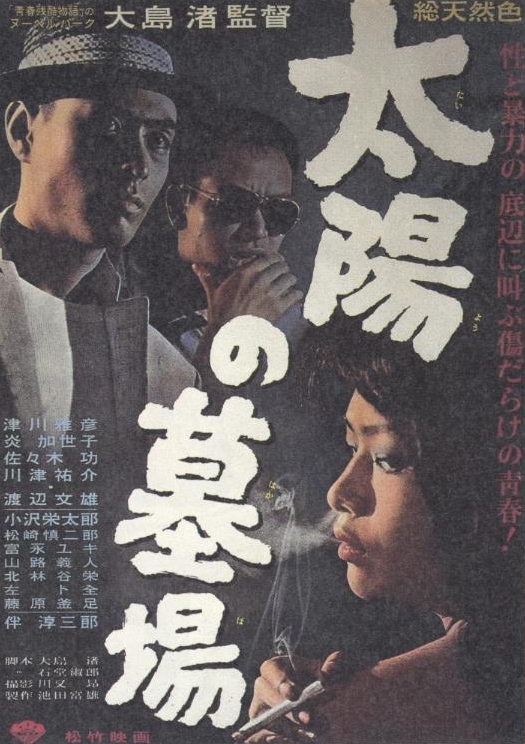 “Love and hope for the youth!” reads a prominent sign in the middle of a hopeless slum in Oshima’s bitterly nihilistic youth drama The Sun’s Burial (太陽の墓場, Taiyo no Hakaba). Then at Shochiku, home of polite melodrama, Oshima was one of a handful of youngsters (that also included Kiju Yoshida and Masahiro Shinoda) bumped up to director ahead of schedule in an attempt to find voices who could speak to youth in much the same way Nikkatsu was doing with its incendiary tales of the new bright young things. The Sun’s Burial would be Oshima’s penultimate film for the studio before he stormed out after they pulled his next film Night and Fog in Japan from cinemas fearing its fierce critique of a divided left torn apart by dogmatic rigidity and generational conflict was too on the nose in wake of the assassination of the Socialist Party leader by a right-wing nationalist.

Set in the slums of Kamagasaki, Osaka, The Sun’s Burial follows a collection of desperate adolescents trying to survive in an intensely hostile environment. Our “hero” the conflicted Takeshi (Isao Sasaki), is inducted into a street gang after getting beaten up by young tough Yasu (Yusuke Kawazu). Along with his friend Tatsu, he is originally quite taken with the idea of becoming a gang member, but blanches when he passes a room full of captive women, one of whom is being beaten for having conceived a child.

Meanwhile, across town, his polar opposite, the cynical survivor Hanako (Kayoko Honoo) is running a blood racket, literally bleeding the proletariat to sell their bodily fluids on to the cosmetics trade. Technically operating under the aegis of her petty thug father Yosematsu (Junzaburo Ban), Hanako is in business with a doctor and a couple of minions but later has her authority undercut by a mad old imperialist known as “The Agitator” (Eitaro Ozawa) who keeps insisting that the Russians are coming and they have to be ready.

Not permitted to maintain power in her own right, Hanako is forced to shuttle between male protectors, occasionally pitting one against the other in a bid to come out on top. In addition to her blood business, she also engages in casual sex work and seemingly has no qualms about wielding her sex appeal as a weapon in order to manipulate male power. Pushed out by The Agitator, she turns to gang leader Shin (Masahiko Tsugawa) for a temporary alliance. When he too cuts her out, she thinks about tipping off the area’s big Yakuza boss, Ohama (Gen Shimizu), to Shin’s whereabouts, always looking a few moves ahead while the callous Shin remains wary and ever vigilant.

In a move which surprises and disturbs the naive Takeshi who is nevertheless captivated by her cynical self assurance, Hanako is entirely indifferent to the suffering of other women, willingly co-operating with Shin while knowing that he runs an abusive prostitution ring. Takeshi’s loss of innocence comes early when he is sent to go out and find some victims with his friend Tatsu who convinces him to club a high school boy canoodling with his girlfriend over the head so they can rob him. Takeshi looks on in mild confusion and horror as Tetsu proceeds to rape the young woman, turning to Hanako for guidance but all she does is shrug. The high school boy later commits suicide, presumably unable to bear the shame of having failed to protect his girlfriend, leaving Takeshi feeling as if he has blood on his hands. To Hanako, however, the boy’s death is no one’s fault but his own, a product of his own weakness. A strong person, she posits, would have sought revenge. What sort of person ups and dies without a fight?

Meanwhile, back in the slum, a man hangs himself after falling victim to The Agitator’s latest scam – getting involved with a dodgy gangster’s exploitative scheme to buy up legitimate IDs from desperate people and sell them to even more desperate undocumented migrant workers. Full of tales of Empire, The Agitator declares that he’s going to march them all up to Tokyo and teach those noisy students a lesson, proving somehow that populist militarism is not yet dead in quiet corners of Japan. The Agitator has several followers among the middle-aged and older denizens of Kamagasaki, taken in by his bluster and lacking any other sources of hope. They follow him because he demands to be followed and because he made them a series of promises. Only when they realise his plans rest on exploiting people even more unfortunate than they are, and suddenly realising he never got round to paying them either, do they finally rebel, burning down the slum in protest of their hopeless circumstances.

Berated for her cynicism by the now compromised Takeshi, Hanako offers only the defence that she has survived and will continue to survive where others may not if they allow their consciences to take precedence over self-preservation. Bleak as it gets, Oshima ends on with a note of anxious industry as his determined heroine dusts herself off and gets “back to work”, escaping from the ruins of the burned out slum in the bright morning sun. “No hope for Japan now” an embittered member of the older generation laments, and Oshima, it seems, is apt to agree.