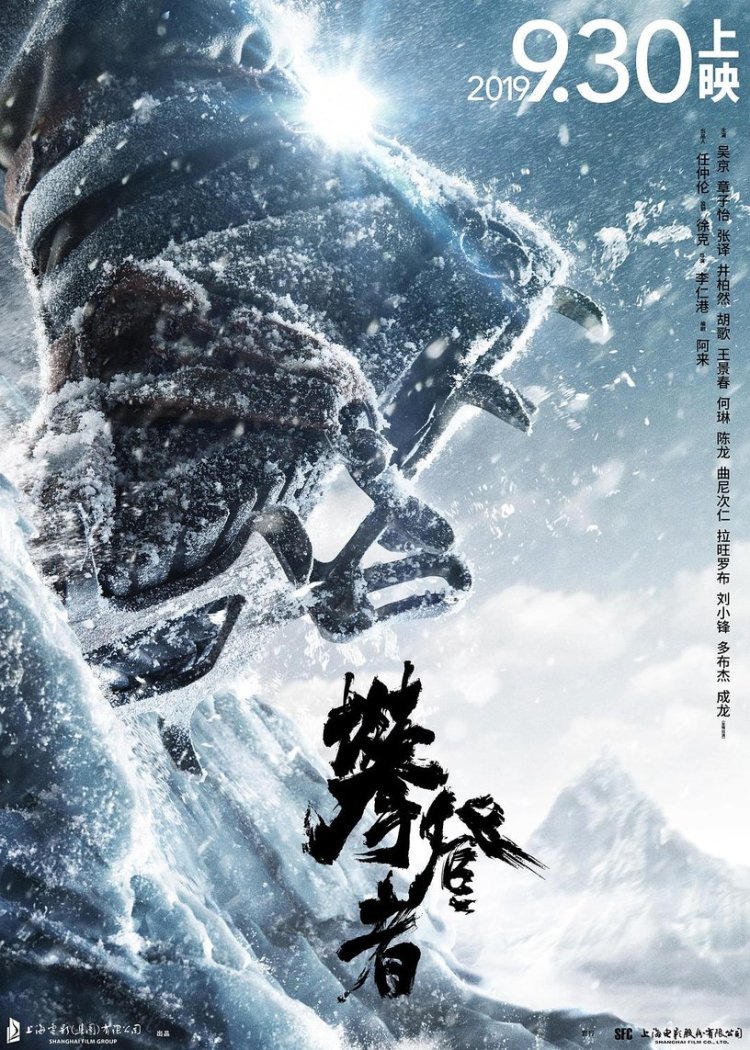 “Because it’s there” George Mallory famously said when questioned why exactly he wanted to climb Mount Everest. The hero of Daniel Lee’s The Climbers (攀登者, Pāndēngzhĕ) who regards Mallory as his idol has a slightly more reasoned response when similarly questioned by a student, pausing before explaining that humans are always eager to climb towards the future. That will prove to be a rather ironic statement in that Fang Wuzhou (Wu Jing) is a man in many ways trapped by past injustice, unable to move on from simultaneously achieving his dream and being denied its glory.

Narrated by meteorologist and Wuzhou’s innocent love interest Xu Ying (Zhang Ziyi), the action begins in 1960 when the Chinese National Mountaineering Team makes an attempt to conquer Everest from the North Face in response to a territorial challenge from the other side. During the ascent, the team’s captain is killed leaving the three remaining members to press on to the summit alone. Having conquered the mountain, they are unable to record their achievement because they lost the camera during an avalanche and so their success goes unrecognised by the international community. This is particularly bad news for Wuzhou whose intensely romantic attempt to woo shy meteorology student Xu Ying is interrupted at the critical moment by the news they’ve been denied and all their dreams are dashed. Wuzhou becomes sullen and withdrawn, resentful at being thought a fraud. The failure costs him the courage he had mustered to pursue his romantic destiny, allowing Xu Ying to leave for many years of research in the Soviet Union without telling her how he really feels.

Xu Ying’s commentary opts for understatement when it briefly remarks that the nation entered a period of “darkness” following the “failure” of the Everest attempt after which the Chinese National Mountaineering Team was disbanded. Wuzhou is relegated to the boiler room in a factory while his surviving friends, Jiebu (Lawang Lop) and Songlin (Zhang Yi), pursue their separate destinies, Jiebu returning to his sheep farm and Songlin, whose foot was ruined by frostbite, joining a sports training facility. By 1975, times have changed and the powers that be see fit to mount another attempt on Everest in order to measure it “properly” and restore China’s international mountain climbing reputation.

For all that The Climbers is a propaganda epic filled with calls to “show the world what Chinese men can do”, it has its share of flawed heroes failing to measure up to a vision of themselves as fearless champions of their nation. Wuzhou is understandably an embittered man obsessed with the rejection of his first summit, but he’s also an emotional coward who ties the need to have his success validated with the right to speak his heart to the improbably patient Xu Ying who apparently continues holding a torch for him throughout her long years in Russia, only implying she can’t wait for him any longer by putting their relationship on a professional footing when she arrives to lead the meteorological department on the 1975 summit attempt. Nevertheless, the pair share an array of meaningful looks filled with poignant longing while Xu Ying laments the presence of the mountain which stands between them before seemingly deciding to sacrifice herself for Wuzhou’s dream in the forlorn hope of finally conquering it.

Songlin, meanwhile, is resentful not so much towards the mountain or the fact that he will never be able to climb it again but towards Wuzhou who saved his life and let the camera fall, thereby bringing shame on the Chinese nation. Later, a brave young man opts to sacrifice his life to ensure the camera’s survival, and as Songlin later comes to understand the climb is a heavy responsibility which puts young lives at risk for a fairly meaningless prize which may not bring the glory to their nation that the young men and women trying to reach the summit might expect. Nevertheless, they plough on regardless. 1960 leads to 1975, and then to 2019 in which intrepid Chinese climbers once again attempt to conquer Everest in the company of a (in some ways not terribly) surprising star cameo in order to reemphasise the nation’s manly prowess and overwhelming desire to protect what it sees as its territory. Lee makes the most of the snowy vistas for a series of death defying stunts as the team (repeatedly) encounter avalanches, rock falls, and dangerous storms, risking all to bring glory to China but remaining resolute in their determination to make it all the way to the top.

The Climbers is currently on limited release in UK cinemas courtesy of Cine Asia, and in the US from Well Go USA.