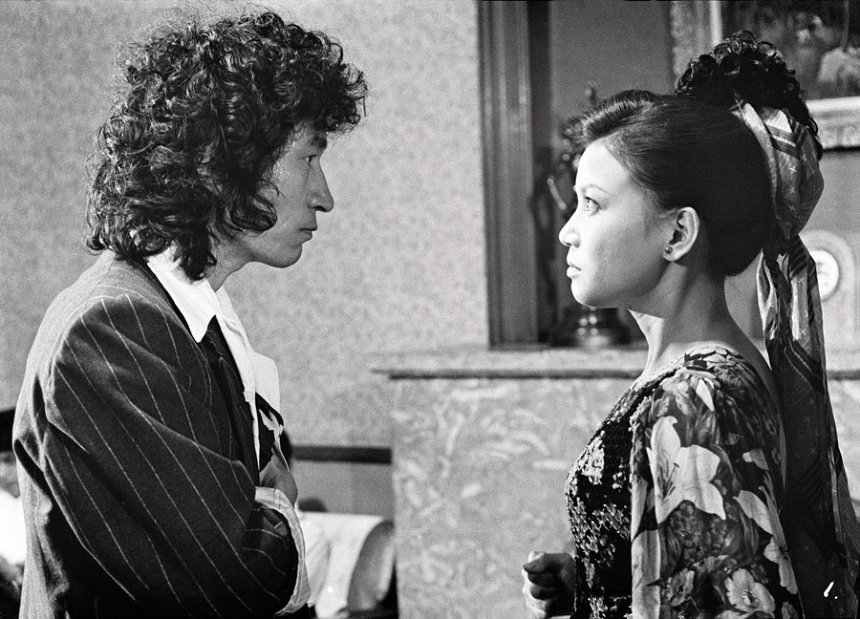 Japanese cinema of the 1970s fell hard for the prestige murder mystery. Following the success of The Inugami Family, an early and unexpected hit thanks to Kadokawa’s “innovative” marketing strategy, multi-cast detective dramas dominated the box office for the rest of the decade. Meanwhile, ATG had been known for serious and high-minded avant-garde cinema throughout the 1960s but its brand of left-leaning, politically conscious, arthouse-fare was tantamount to box office poison in the increasingly consumerist post-Asama-Sanso world. ATG’s Kindaichi-centric Death at an Old Mansion, updated to the present day, pre-dated Ichikawa’s series for Toho by a whole year and perhaps signalled their resignation to shifting into the mainstream. By 1977, that transition was perhaps complete with former Nikkatsu Roman Porno director Chusei Sone’s adaptation of a classic serial penned by Ango Sakaguchi, an author of the “Buraiha“ school well known for chronicling post-war aimlessness.

Set in the summer of 1947, Case of the Disjointed Murder (不連続殺人事件, Furenzoku Satsujin Jiken, AKA Unrelated Murder Cases) is a classic country house mystery in which a series of high profile writers are invited to a mansion owned by a wealthy family, the Utagawas. Only, as it turns out, many of the letters of invitation are forgeries or have been doctored so that several unexpected guests have arrived including dissolute artist Doi (Yuya Uchida) whose presence is particularly awkward because he is the former husband of the host Kazuma’s (Tetsuro Sagawa) new wife Ayaka (Junko Natsu). Soon enough, one of the guests is murdered, and then another, and still more, seemingly for no real reason. Amateur detective Kose (Kazuya Kosaka), one of the “unexpected” guests, tries to piece the crime together to prevent its expansion but finds himself outflanked by a lack of material evidence.

Sakaguchi’s original tale ran as a newspaper serial which promised a cash prize for anyone clever enough to identify the murderer(s) before the truth was revealed as it eventually is in true country house mystery fashion with the detective explaining everything in a lengthy monologue while all the interested parties sit around a dinner table. The gamified nature of the serial is perhaps the reason for the large cast of characters comprising of Utagawa family members, the literary house guests, and staff all of whom become mixed up in the ongoing crime drama which Kose comes increasingly to believe is engineered rather than random as it might originally seem.

The “supposed” random chaos of the the “unconnected” murders is a key part of Sakaguchi’s interrogation of post-war anxiety. For a time it seems as if these mostly quite unpleasant people have taken the opportunity of being trapped within a claustrophobic environment to air out their own grievances with each other in an atmosphere already tainted with violence and resentment. Meanwhile, the moral corruption of the Utagawa household continues to come back to haunt them in the sexual transgressions of the late grandfather who apparently fathered several illegitimate children in addition to those from multiple marriages. The half-siblings bring additional strife into the Utagawa home in Kazuma’s incestuous desire for his half-sister Kayoko (Hitomi Fukuhara) who returns his affections and even hopes to marry her brother, while he has also transgressed by “buying” Ayaka from her venal first husband Doi.

As in most Japanese mysteries, however, the motives for murder turn out to be banal – simply monetary greed and seemingly nothing more even if backed up by a peculiar kind of romanticism. Such unbound desire for riches is perhaps another symptom of the precariousness of the post-war world in which individual survival is all in a chaotic environment where financial security is more or less impossible for those not already born into wealth. Kose begins to solve the crimes through the “psychological traces” the killer(s) leave behind, the various ways in which “scenes” are calculated and contrived but fail to entirely mask the truth which lies behind them.

Which is to say that the mechanics behind the killings ultimately become secondary to their psychological import in which Kose analyses superficial relationships to uncover the depths which underpin them and their implications for a conspiracy of crime. This persistent amorality in which human relationships and connections are subverted for personal gain is yet another example of post-war inhumanity in which the corruption of the war has destroyed the “innocence” of pre-modern Japan and provoked nothing more than a moral decline born of a confused anxiety and a generation struggling to adjust itself to a new reality.

Death at an Old Mansion aside, the ‘70s mystery boom had a peculiar obsession with post-war crime in the comparative comfort of the economic miracle. 30 years on, society was perhaps ready to ask more questions about an intensely traumatic moment in time but equally keen to ask what they might say about another anxious moment of social change only opposite in nature. No longer quite so burdened by post-war regret or confusion, some began to wonder if consumerism was as dangerous as poverty for the health of the national soul, but nevertheless seem content to bask in the essential cosiness of a country house mystery in which the detective will always return at the end to offer a full and frank explanation to a roomful of compromised suspects. If only real life were so easy to explain.