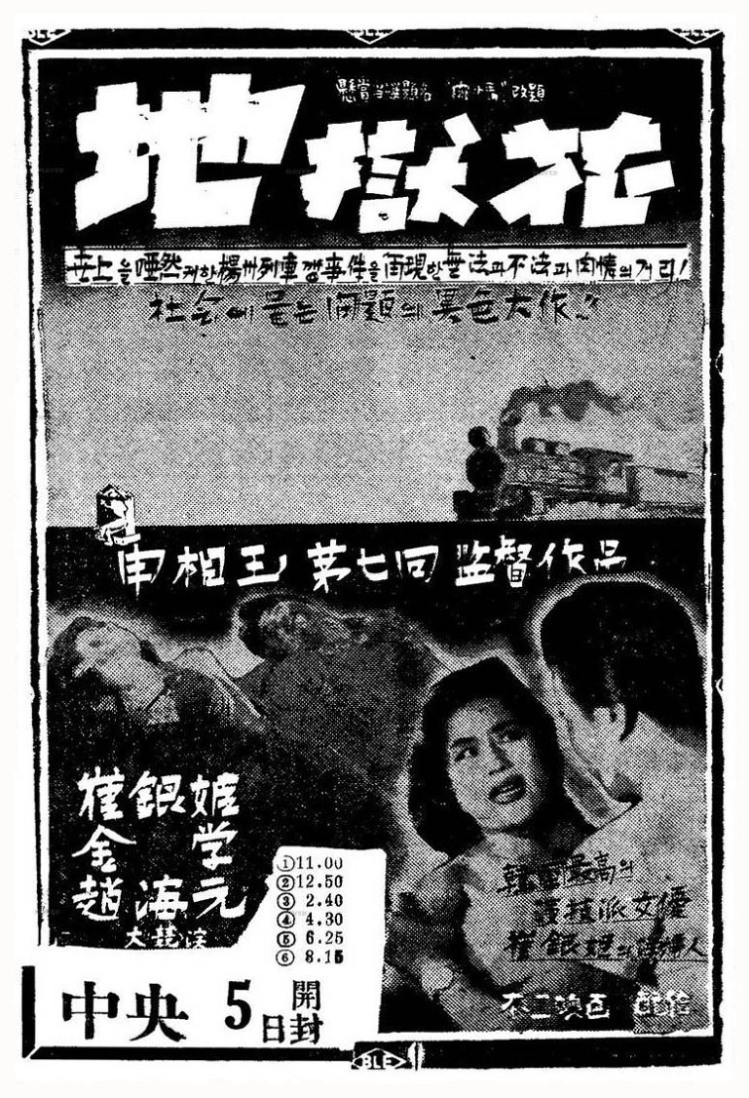 Five years after the end of the Korean War, Korea was still a poor country in which hope for the future seemed all but impossible. Shin Sang-ok’s The Flower in Hell (地獄花 / 지옥화, Ji-oghwa), borrowing incongruously from both European neorealism and American film noir, situates itself directly within the “hell” of the modern city, a lawless and loveless place where life is cheap and an honest buck hard to come by. The corrupting influence of the American military has come to dominate the local economy with complicity the only option for survival.

“Country bumpkin” Dong-sik (Cho Hae-won) knows nothing of this when he arrives in Seoul in search of his missing brother. Pure of heart, he tries to intervene when he spots someone being robbed, only to be beaten up and fleeced himself. Unable to find trace of his brother Yeong-sik (Kim Hak) who apparently came to the city on business some time ago and hasn’t been heard of since, he roams the streets looking for clues. Unbeknownst to him, Yeong-sik has fallen into a life of crime and avoided contacting his family out of shame. Currently in a relationship with brassy “Western Princess” Sonya* (Choi Eun-hee), he has no intention of going back to a life of honest hardship.

“We live in a world of confusion” a street pedlar tells a melancholy Dong-sik, but that was perhaps something he’d never quite realised in his apparently happy life in the country. Dong-sik, just demobbed from the army, has come to bring his brother home because his mother is worried about her missing son. What Dong-sik comes to represent is a kind of village utopia that embodies the spirit of an uncorrupted Korea where the people are honest and happy, not wealthy but not starving either. Seducing him, Yeong-sik’s girlfriend Sonya ruffles Dong-sik’s hair and remarks that it smells like corn – the scent of pastoral innocence and the dream of a simpler life that she is now chasing.

A “Western Princess” – the slightly derogatory name given to sex workers catering largely to American servicemen, Sonya is an intensely corrupted figure. Brazenly chewing gum and unafraid to use her sex appeal as a weapon, she bewitches Yeong-sik and then breaks the ultimate taboo of seducing his brother. Yeong-sik, meanwhile, has been confronted with the dishonestly of his city life and considers returning to the country, asking Sonya to marry him but finding her unresponsive. Aside from her practical questions about the money they would need to start a new life, Sonya currently enjoys an unusual amount of independence for a contemporary woman and is unlikely to want to surrender that to become a conservative wife to Yeong-sik in his quiet country town even if he really could learn to accept and ignore her past as a sex worker.

Despite her original aversion to Yeong-sik’s offer, the idea begins to appeal to Sonya when captivated by Dong-sik’s innocence. Aware that she is also corrupting him, Dong-sik now dressing in a garish gangster-style Hawaiian shirt, Sonya convinces herself that what she wants is to return with him to his rural paradise while he agonises that perhaps he himself has lost the right to go back there because of his transgressions in the city. Meanwhile, another sex worker, Julie* (Kang Seon-hee), has also taken a liking to Dong-sik because of his simple hearted country ways. A war orphan, she is far less comfortable with her life as a Western Princess, her dependence on the Americans, and her lack of opportunities for a better life as a woman who most likely can no longer marry. Putting this to Dong-sik she finds him superficially sympathetic, telling her that she is good and kind and therefore could easily find a nice man to settle down with. When she asks him if he would consider marrying someone like her, all she gets is silence while he later cruelly answers her that he is not convinced she has the right to live in his idealised pastoral paradise.

Yeong-sik tells Sonya that the world won’t always be out of control, he too now yearning for the purity Dong-sik’s idealised hometown represents, but finds himself sinking deeper into the morass of the modern society in order to get there. Aside from pimping out the Western Princesses, the other main line of business for Yeong-sik’s gang is robbing American military bases, striking while the women distract the soldiers with salacious dance routines. Sonya and Yeong-sik are already too far gone, trapped in the purgatorial hellscape of the modern city, unable to go either forward or back. For the pure of heart like Dong-sik and Julie, there may be hope yet but if there is it lies only in the imaginary utopia of an idealised “hometown” free of American corruption and existing in another, purer Korea perhaps now inaccessible to those whose hearts are already blackened by the fetid air of the contemporary capital.

*Names are as they appear in the subtitles for the Landscape after the War box set. In the screened 35mm print of the film the two women are named as “Sonia” and “Judy”.